Women must be at the centre of the Ebola response 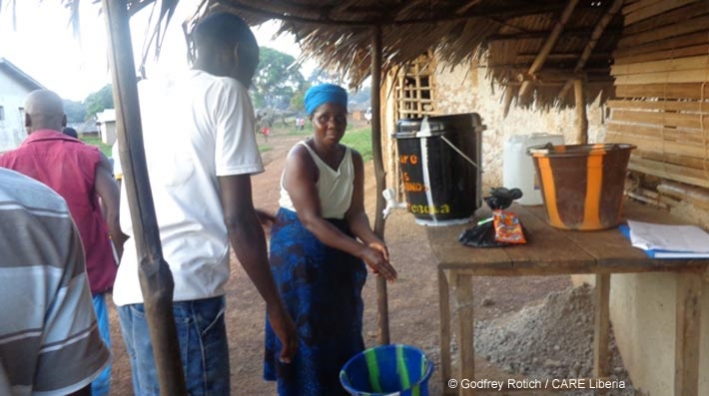 Liberia: A woman washes her hands at a CARE handwashing station before going shopping

This week, a major international donor conference took place in Brussels to plan the rebuilding of Ebola hit countries. Having just recently returned from Sierra Leone and Liberia, I was hoping to see a gender transformative approach informing donor commitment – because I had seen for myself how the impact of the crisis is affecting women and girls.

Recent media attention has highlighted how Ebola has hit women the hardest and how the epidemic is threatening gains in gender equality made in Liberia, Sierra Leone and Guinea. The Washington Post reported that across Guinea, Liberia, and Sierra Leone, collectively 55-60% of those who died were women.

So why is it that we cannot move beyond the ‘interesting observation’ stage, and target that segment of the population most at risk to ensure prevention, treatment and recovery? Years of combating HIV, malaria and tuberculosis – all of which have taken the harshest toll on women in sub-Saharan Africa – reveal lessons that could help stem the tide of the Ebola epidemic.

Women and girls on the frontline

There is little doubt that women are at the frontline of the Ebola response as they are caring for sick relatives at home, or likely to be working as nurses, traditional healers and health facility cleaners. There is scant reliable data disaggregated by gender on the current outbreak, but reports suggest it has a particularly destructive impact on women.

With medical facilities overwhelmed, expectant mothers are often left without pre-natal care, obstetric services and new-born care. With borders closed and travel restricted, small-holder farmers, mostly women, are hard pushed to get to community markets to sell their produce. Isolated by quarantines or orphaned by Ebola, girls and young women are at increased risk of gender-based violence and exploitation.

75% of female deaths in Liberia

Liberia stands out with a disproportionate share of female deaths – 75%, which will truly affect women’s and the country’s economic potential. The blockade put on Liberia is compounding the already fragile economic environment and exacerbating the capacity challenges. Yet there is a potentially more catastrophic crisis following Ebola: a drop in GDP growth by more than 1%. This renders the spread of the disease and impact on women far more devastating.

Why are women disproportionately affected? The evidence points to women’s expected social role as carers of the sick, an expectation intensified in contexts where formal healthcare provision is weak and inaccessible. Linked to this is the idea that women should sacrifice for their families, even to the extent of putting their own lives at risk to prioritise care for ailing family members. To some extent, this reflects the role of women in the society.

We need to recognise women as leaders

Acknowledging the disproportionate impact of Ebola on women is a first step, but it’s not enough. To succeed, responses must put gender-specific realities and needs front and centre.

It is critical to recognise and involve women as leaders in their communities. Women may have increased exposure to the disease, but they are also the best resources for containing it. They must be meaningfully engaged in raising awareness and planning responses in their communities and countries.

In addition, the Ebola response should recognise and compensate women for the unpaid care work they do. As women are pulled out of their daily work to care for sick family members or children orphaned by the disease, they have less time to earn money and grow and sell food, which can lead to increased food insecurity and poverty. Yet we should not forget the men, who are affected as well, as they are the ones carrying the dead bodies.

For all of these reasons, CARE International in Liberia and Sierra Leone has integrated a gender-sensitive approach into its Ebola response. There is an urgent need for stakeholders to collect and use gender-disaggregated data to better target Ebola management and response at district and national levels. Generating such data is part of CARE’s Gender Mainstreaming Strategy.

Women as agents of change

It is important for the international community, governments, and relevant stakeholders to deliberately focus on women as valuable agents of change and social mobilisers with a central role to play in shaping a comprehensive and multi-faceted response system, sharing expertise and knowledge, raising awareness and enhancing care. Women must be included in strategising when assessing the scope of the outbreak and designing responses and implementing interventions.

There is an urgent need to mitigate the economic losses of households during the pandemic and to position them for economic recovery and eventually, economic empowerment in the aftermath of the pandemic. The affected economies need to ensure that women are empowered to participate in rebuilding their countries.

Many of the donors gathering in Brussels have already committed to putting gender at the heart of their emergency response funding at the global level. A year ago, donors and operational agencies convened the Call to Action on Violence Against Women and Girls in Emergencies and outlined 12 specific ways they would seek to better prevent gender violence and empower women and girls in times of crisis.

The meeting in Brussels on 3 March was a pivotal turning point in the fight against Ebola, with international leaders and institutional donors pledging their continuous commitment as the response moves from emergency to recovery. However, amidst talks on health system rebuilding, economic recovery and global coordination, the issue of how the Ebola epidemic affects women and girls was only briefly mentioned.

If we are going to support all of the affected people, communities and countries to recover, the international community needs to look at the Ebola epidemic in West Africa through a gender lens and ensure that the recovery process is gender-sensitive and gender-responsive.

David was CARE’s Ebola Crisis Policy and Information Management Coordinator based with CARE International UK. He previously worked in Malawi and the Democratic Republic of Congo on HIV, health system strengthening, and governance issues. His area of expertise is in working with policy and governance in dealing with epidemic and pandemic crisis. David trained as a doctor with a background in infectious disease. He received his medical training at the University of Calgary in Canada and in International Health Policy at the London School of Economics.

More in this category: « People Power: Why climate change is now a human rights issue What the UK BIS Department can do to promote corporate responsibility »