Home // Development Blog // It’s not just about the money: 5 ways that savings and loan groups change minds and lives too

It’s not just about the money: 5 ways that savings and loan groups change minds and lives too 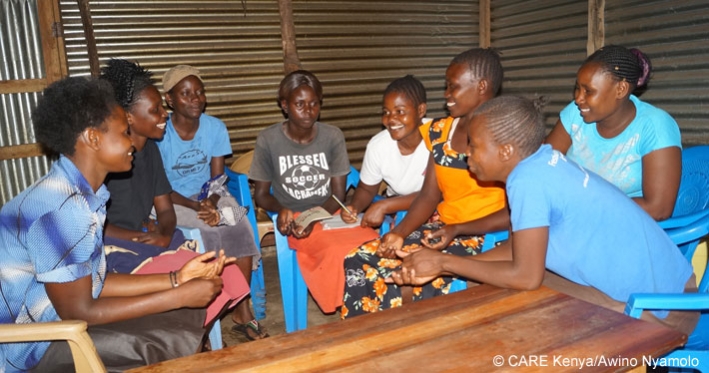 There are 2.5bn people who are financially excluded – who have no access to basic financial products, like savings, credit or insurance. I’ve just been to Kenya to visit Banking on Change, a programme which is changing that. I met young men and women who have joined savings and loans groups set up by CARE Kenya through Banking on Change, a partnership between CARE, Plan and Barclays. Here are five things that the visit impressed on me.

1. Saving just 30p a week can really change your life

While I was in Kenya I met young men and women who have joined savings and loans groups formed by CARE Kenya through the Banking on Change partnership. They save between 30p and £3 a week each, which they pool, and then make loans to members (between 20-30 in a group). The loans are used to invest in their small businesses and they pay them back within one month. It’s very simple and it works.

2. Savings and loans groups empower young mothers and help them break out of domestic dependency

The young women’s group was in a remote small town on the shores of Lake Victoria, over two hours’ drive from Kisumu, Kenya’s third largest city. The young women were shy at first, but then opened up to share their stories and how the group has helped them. They are all aged 20-25, married with 2-3 children, and their motivation for joining the group was to look after their growing families and save for the future.

Mary, the chair of the group, told me: “Before the group I had problems in life. I had to ask my husband for money. I formed this group because I want to succeed in life. Now I’m self-reliant, I can do budgets properly, I can support myself and send my children to school. Now if something happens to my husband I can look after my children.”

Mary (above, centre) has set up a grocery stall, selling fresh fruit and vegetables. Her husband gave her 5000 Kenyan shillings (£33) to start it up, and thanks to the training she has received from CARE Kenya, she has already tripled that investment. She’s used loans from the group to invest in more stock, especially tomatoes for which there is high demand. The profit from the stall is around 250ksh (£1.60) a day, which Mary spends on food, school fees (200ksh or £1.30 a month plus books and uniform), mobile airtime and charging her phone (which she uses every day to communicate with her suppliers), water and transport.  The savings and loans group has made a big impact on Mary: “I want to be an inspiration to other young women in this town and encourage them to benefit from savings and loans as well.”

3. Joining a savings and loans group helps young men focus on creating better livelihoods and contribute to a growing economy

In a different environment, I also met a young men’s savings and loans group in Kibera, Africa’s largest informal settlement. Kibera is a densely populated part of Nairobi – over 1 million people crowd into this tiny space. Aged 20-30, the young men in the group are predominantly single and living alone. Karim, chair of the group, told us: “It’s unusual to see groups of men sitting together to plan for the future. We really appreciate the savings and loans group. We all have aspirations for the better.”

Softly spoken 20-year-old Josphat is a car washer, and until he joined the group, he didn’t keep track of the money he earned, and other than sending 1000ksh (£6.60) a month home to his parents, he wasn’t saving. But that changed when he realised that by saving small amounts of money, he could get a big return. Now Josphat puts aside 300ksh (£2) each week on his mobile phone and then on Saturdays transfers it to savings with the group. So far he’s saved 4000ksh (£26.60) and is looking to the future: “Now I use money differently – I work hard because I know I have to save on Saturday. In the future I want a machine to develop my car washing. I want to encourage others to join the group so they can save to start a business. Saving is good.”

4. Enterprise training has a huge impact on the success of small businesses

Outgoing and charismatic, Diab, who lives in Kibera, told us that before joining the savings and loans group he was earning 200ksh (£1.33) a day as a taxi driver. If he had any money left over he would spend it on clothes and going out partying. But as he approached his 30s he decided he should become more responsible – and he didn’t want to be so reliant on the owner of the car he hires.

Last year he set up a small business to sell popcorn, which started off making 150ksh (£1) a day, but he didn’t know how to manage it and so it soon folded: “It didn’t work because I didn’t manage it well. I had no records, no idea how much I was spending, and I didn’t market to get customers.”

In March he joined the savings group, and since then has received enterprise training from CARE Kenya. This was really eye opening for Diab – he realised the key elements to running a business and was inspired to start again. By May he had saved enough to be able to take a loan to start again – and this time he has a business plan.

He has hired two young men to help him and has trained them in record keeping. They are selling popcorn to schools, and also have a small shop in a very busy part of Kibera, with plenty of passing trade. The business is doing well and making 500ksh (£3.33) profit a day. He said: “I want to achieve something in life – I am saving for change. I’d like to be a good role model for Kibera. I want to be someone who can uplift others. First I have to start with myself.”

What really struck me about both groups was the fantastic grasp they had of the figures. They all knew exactly how much they had invested, their income and expenditure and their profit margin. Thanks to the training received through the group they have become financially literate and confident. They have great ideas, and know how to implement them.

And they are gaining the respect of their families and peers. Both groups want to inspire other young men and women to form and join savings groups too.

It was really inspiring to see how such a simple concept – saving small amounts of money, pooling them and loaning them to group members – makes such a difference. And this will continue long after Banking on Change has ended.

There are 7 million people like Mary, Josphat and Diab who are members of savings and loans groups in Africa – of which 3.8m are facilitated by CARE. It’s a small but significant step towards achieving financial inclusion for 2.5bn people.

Banking on Change is a partnership between Barclays, CARE International and Plan UK. It aims to break the barriers to financial inclusion and improve the quality of life in some of the world’s poorest communities, by giving people the skills to save and manage their money effectively. Since 2009, Banking on Change has made a difference to the lives of over half a million people around the world living on less than US$2 a day.

Before joining CARE, she was a VSO fundraising advisor in India where she worked for grassroots disability and rural development organisations. She holds a Masters in Development Studies.

More in this category: « We are at historic levels of global need: and you want to cut aid? Girls’ education in Afghanistan: Why engaging men and boys is crucial for building community support »