Home // Development Blog // Calling all NGO staff: How to leave a legacy of impact at scale

Calling all NGO staff: How to leave a legacy of impact at scale 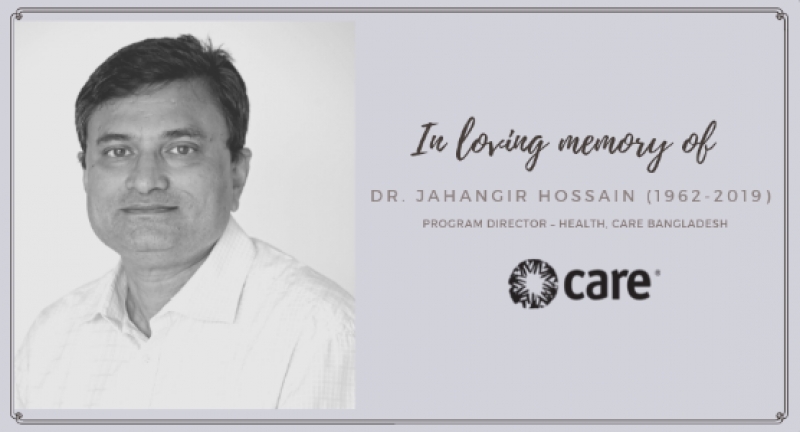 Many of us start working in humanitarian, development or human rights work because we want to change the world or make our country a fairer, better place to live. But in a world where that work is mostly carved up into discrete “projects”, we often end up being satisfied with so much less. If the project we’re working on meets the targets we have agreed with the donor, if an evaluation shows positive change for those we have worked with directly, we have done good work. But is that enough?

Some of the colleagues who most inspire us are those who constantly push further, who try to change the whole system, unsatisfied with smaller-scale change alone. CARE International recently lost a colleague in Bangladesh who did just that, Dr Jahangir Hossain, CARE Bangladesh’s Health Program Director – or Jahangir Bhai as he was affectionately known by his many colleagues and friends, in Bangladesh and around the world.

Here are four examples of where he pushed CARE and our partners’ work to be more strategic and focused on systems-level change.

The Community Support System (CmSS) model was developed in a sub-district of Dinajpur, using community mobilisation and organisation to increase the use of maternal health services. Funded initially by the Japanese Government from 1999, impact evidence showing positive results particularly for poorer and more marginalised groups caught the interest of government and donors, and the model is being replicated in 12,584 community clinic catchment areas across 64 districts throughout the country, covering a total of 81 million people.

The Nutrition at the Centre (N@C) project validated a sub-district, multi-sector approach (Upazila Nutrition Coordinating Committee, or UNCC) to address malnutrition. The project worked directly in 394 communities of Sunamganj district, and contributed to reducing stunting by 14.4% (from 47.2% to 32.8% – a reduction of 2.9 percentage points a year), enabling 3,637 children under 5 to escape stunting. Involving government stakeholders in the development, review and evaluation of the UNCC model has led to its incorporation in the government’s Second National Plan of Action for Nutrition. Over the coming years, the UNCC model will be replicated in 491 sub districts and 4,500 Unions in Bangladesh, reaching a total population of approximately 160 million.

In remote rural areas such as much of Sunamganj district, it is hard to retain or support health staff, so the CARE-GSK Community Health Worker (CHW) Initiative validated a model for private community-based skilled birth attendants. Positive impacts from the pilot phase in 2011-2015, including a four-fold increase in skilled attendance at births from 12% to 49%, has led to the scaling up of the model to the whole district in a second phase (2015-2020). 300 women health entrepreneurs are providing health services that target 1.4 million people, and there is potential the model could reach another 10 million underserved people in 10 hard-to-reach districts.

Following the arrival of more than 700,000 refugees from Myanmar from August 2017 onwards, CARE was approached by UNICEF and the Bangladesh Ministry of Health to act as a resource to improve organisations’ systems for responding to emergency nutrition needs. Rather than directly providing emergency nutrition support to a small subset of the refugees (the 10% of crisis-affected people CARE often targets in an emergency response), CARE provided tools and capacity strengthening support to the whole nutrition sector, improving the quality and coverage for all. This increased our contribution to impact in the nutrition sector from a likely 1,500 to almost 23,000 children – or nearly 15 times the impact!

So, how did Jahangir Bhai and his colleagues do this?

In all cases, the models that were scaled up were developed with strong community involvement, ownership and leadership, which is critical to their long-term success and sustainability. The models targeted specific constraints affecting the most marginalised people in specific local contexts, and worked with community leaders and activists to develop solutions that would address these.

Involve government in review and evaluation and learning

CARE always involved local and senior level government officials, and allies in academia or donors or other NGOs, to help develop the models, oversee pilot projects, and to visit project areas to better understand challenges and successes. Where possible, local officials and leaders would present the model to these visitors, rather than CARE, showing the potential for these to be integrated into government systems and structures.

Dr Hossain understood the importance of careful documentation of impact and purposeful dissemination of results. In the CMSS for example, by tracking each pregnant woman, the community was able to develop a data system that monitored health service utilisation, which provided evidence to demonstrate the impact of the programme. This information was useful locally, but was also shared in national level workshops with donors and policy-makers in order to demonstrate impact on a larger scale. Similar approaches to data and evidence were used in the nutrition and skilled birth-attendance cases.

Jahangir Bhai was very skilled at building positive relations with those he worked with, within CARE and with partners in government, donors or civil society – and always based on mutual recognition and respect.

Roll up your sleeves and get your hands dirty

Supporting scale-up doesn’t stop with adoption of a model in a document. Across these examples, CARE provided practical support to government to adapt and replicate models, from developing guidelines, terms of reference or standard operating procedures, to seconding staff to coordinating units in the Ministry of Health to provide technical support, to training facilitators or ‘trainers of trainers’ to apply the model across the country, or supporting monitoring and data systems to track scale-up.

Think scale from the start

All these cases show how projects were used not as ends in themselves, but as vehicles to test approaches that could eventually contribute to impact at a much greater scale. This was truly planning for scale, from the initial design onwards.

Finally, Dr Hossain was one of the more prolific and most generous sharers of his knowledge in CARE. Both within Bangladesh and at international levels, he frequently presented papers at conferences or in publications, both to share and to inspire others to share their learning too.

Dr Hossain’s legacy is one few may aspire to equal, but it is certainly one that inspires us to think differently about our work, and its potential to make change happen at a larger scale. But perhaps what we will most miss is the example of a colleague who not only went far beyond the expected, beyond the call of duty, but did so in a way that was truly kind, always interested in his colleagues and collaborators as real people. We could all be a bit more Jahangir Bhai.

I joined CARE nearly 20 years ago, in 1999, and have worked managing and leading programs in the UK, Peru and Zambia, and now in the Programmes Team of the International Secretariat. Working from home in the UK, my current role is to support CARE’s teams around the world in generating, sharing and applying knowledge and learning. I coordinate CARE’s efforts to quantify and analyse our global evidence base, towards the global targets for impact we have set ourselves in CARE’s 2020 Program Strategy. But I’m particularly interested in drawing out the learning behind these impact numbers, so as to identify good practices and lessons to be incorporated into our global, regional and country programming strategies. Before working with CARE, I worked with social movements and local NGOs in Central America, and international development and conflict resolution NGOs in the UK.

More in this category: « How Zambia takes out the trash – and provides a model for setting up sustainable services We have a new ILO Violence and Harassment Convention. What happens next? »