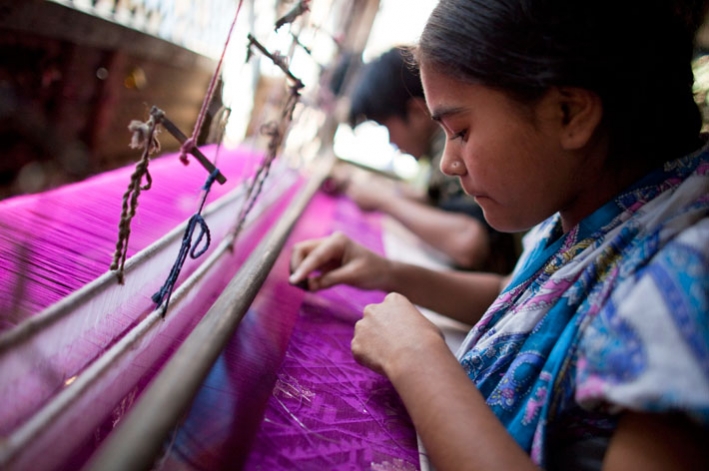 Women working in the garment industry in Bangladesh. © CARE/Josh Estey

This week American stakeholders announced the formation of the Alliance for Bangladesh Worker Safety and signatories to the European Fire and Building Safety Accord released their Implementation Plan. While both agreements represent steps in the right direction, to address the root causes of the Rana Plaza disaster, both initiatives must take further measures to build capacity and political will in the Government of Bangladesh.

International efforts to improve working conditions in Bangladesh following the Rana Plana collapse, which earlier this year killed more than 1100 workers, have focused almost exclusively on pressuring garment companies to sign the largely Europe-centric Accord on Fire and Building Safety, or the related US-based initiative, the Alliance for Bangladesh Worker Safety. Signatories to these agreements have shown leadership by responding with urgency to repeated failures in health and safety standards in the industry.   However, concentrating efforts on getting companies to sign voluntary standards overlooks some of the root causes of the initial collapse: specifically, lack of capacity and political will in the Bangladeshi government to enforce global labour standards.

What the Agreements do well:

From CARE’s perspective, these agreements represent a galvanization of stakeholders across the garment sector to address pervasive and long-standing concerns. They call for actionable improvements drawing on the responsibilities of local and global business and establish protections for workers’ wages while building safety is updated. This is, indeed, a step in the right direction. Designers of the Accord (including the Ethical Trade Initiative, of which CARE International UK is a member) and the Alliance have moved forward largely under the principle that any forward action is better than none. Given the recent news that 300 garment factories may have to close due to safety issues, there is a clear sense of urgency. The agreements come none too soon.

That being said, we have to acknowledge what the Accord and Alliance do not focus on: building the capacity of the government of Bangladesh as a force for change.  Notoriously, workers in Rana Plaza were asked to return to a building with known structural flaws, after other businesses had already evacuated.  In this situation global garment brands can only do so much.  Rather, workers need:

These are all supports that the state, and not global industry, is best equipped to provide.

(To be clear, none of the above should be read as a free pass for the private sector. My colleague Jamie Terzi, Country Director at CARE Bangladesh(http://www.carebangladesh.org/), wrote previously on some actions that companies can and should take to empower workers, including, but by no means limited to, reviewing purchasing practices and strengthening workers’ representation. CARE also collaborates with actors across the sector to empower the largely female workforce and reduce their vulnerability.)

Unfortunately, it is not yet clear how the Accord or the Alliance will engage the Government.  For example, the newly-announced Implementation Plan of the Accord includes a government representative on its Advisory Board, but not on the more influential Steering Committee. The Alliance does not currently include the government in its formal governance structure at all. Both reference the need to build on the Tripartite National Action Plan (NAP) on Fire Safety, but what this means in practice is yet to be determined.  Finally, while the addition of American companies through the Alliance does bring more resources to bear on the issue, having no less than three building safety schemes complicates social auditing and may further detract from government capacity. The need for multi-stakeholder engagement on the ground represents a tall order. For the agreements to really benefit workers in the Bangladeshi garment industry, all actors will need to operationalize their plans collectively.

In essence, these agreements exist due to governmental gaps, which they can only go so far to fill.  However, what the signatories to the agreements can do is to prioritize coordination with, and where possible, build the capacity of, key government institutions, most notably the labour inspectorate. In addition to putting the principal responsibility back where it lies, this approach would mitigate the risks of establishing parallel health and safety systems.

Despite the inherent difficulties of the task, working with the Government of Bangladesh should be a priority for all involved. In the long-term, this is what will protect and empower workers, and this is where the most long-lasting solutions to preventing another Rana Plaza can be found.

More in this category: « Unlocking the potential of some of the poorest people in Bolivia Welcome to... not another development blog?! »