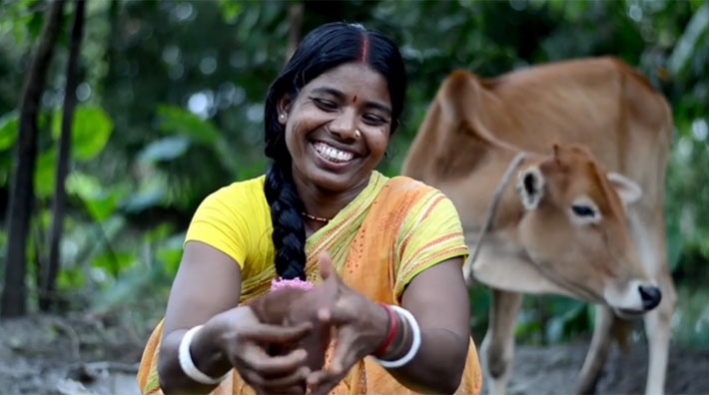 A dairy farmer in Bangladesh © CARE

Many of us dream of a world free from poverty, but how can this be realistically achieved, especially for smallholder farmers who make up the majority of the world’s poor?

Now in its seventh year, the programme has influenced other agricultural value chains in Malawi, Tanzania, Ghana, India and Mali.

It was in Bangladesh’s dairy value chain, however, where CARE first devoted considerable time, energy and resources to incubate and refine its approach to achieving scalable impact for farmers and others in the value chain. Making markets more inclusive takes an in-depth, behind-the-scenes look at what CARE has learned in its journey to reduce poverty through market-based approaches. This book can be of interest to practitioners, funders, companies and governments interested in agricultural value chain development for the benefit of smallholder farmers.

The book is rich in detail and insights, including these top five lessons on how to make markets work:

1. Work along the entire value chain – not just with farmers

Too many NGO value chain initiatives begin and end with the producers. To really get to the heart of improving a value chain, NGOs (or companies or governments) must understand and work along the entire chain from one end to the other. Sometimes the intervention that helps famers most doesn’t lie with the farmers themselves, but rather with other participants at other points along the chain.

For example, even if farmers have all the knowledge and training they need, they still need access to productivity-enhancing inputs, access to markets, and a transparent way of being paid for their milk. Through persistent information-gathering and working with entrepreneurs and companies along the entire value chain, CARE helped remove the most important obstacles to farmers improving their incomes from dairy – but most of these improvements occurred at other points along the chain, beyond direct work with farmers.

Rigidly following plans doesn’t work. If markets and value chains in low-income communities were stable, known and predictable, then developing a plan and tightly following it would be the best way to work. However, neither development work nor markets are static. We usually don’t have (nearly) enough information on the interests, resources and obstacles of everyone along the chain. Therefore, effectively working to enhance markets and value chains requires a different approach that matches the dynamic context.

This approach must be focused on learning from direct experience, from experimentation, from trial and error. Before CARE arrived on the scene, surprisingly little was known about what the dairy value chain looked like, especially from the perspective of smallholder subsistence dairy farmers. Government statistics were inaccurate, out-dated or just not available.

Even after data can be gathered, assumptions and proposed solutions must be tested with pilot projects and experiments. For example, in CARE’s Bangladesh dairy initiative, many plausible ideas existed on paper for how to sell cattle feed and medicines in remote villages so farmers could improve the productivity of their cows. It took three failed experiments, however, before CARE Bangladesh identified a viable solution: microfranchising agricultural input shops. That microfranchising effort today has yielded a growing network of 48 shops under the CARE Bangladesh-owned Krishi Utsho brand. That number is expected to reach 70 by the end of 2015.

At the same time, CARE needed to work with the program’s funder to change its original milestones and deliverables as CARE learned how best to enhance the value chain. The overall objectives didn’t change – but discovering the best way to meet them required much experimentation, openness to learning, and a donor willing to be flexible along the way.

It’s smart economics, and it’s the right thing to do. The Food and Agriculture Organisation of the United Nations estimates that closing the gender gap in access to agricultural inputs alone could lift between 100 million and 150 million people out of hunger. Women provide the majority of agricultural labour in South Asia and sub-Saharan Africa, yet consistently have less access to the resources and opportunities they need to be more productive. Increasing women’s access to land, livestock, education, extension services and technology boost agricultural production, food security and economic growth.

CARE originally thought that farmer groups should be organised with at least one male farmer leader because social norms made it easier for men to travel to markets to buy inputs or sell milk. However, after crunching the extensive data that CARE collected on women’s participation (over 80% of the farmers CARE worked with in northwest Bangladesh were women), CARE found that the most productive and profitable groups had women serving in leadership roles.

4. Design for scale from the start – or risk not making a significant difference

CARE’s project has worked with about 50,000 farmers, as well as hundreds of entrepreneurs and many companies – a fraction, still, of Bangladesh’s 160 million people. From the beginning, CARE sought to reach a level of scale far beyond the farmers and entrepreneurs the organisation worked with directly. In light of Bangladesh’s 160 million population, the 50,000 farmers participating in CARE’s programme did not constitute scale, so CARE sought interventions that would spread through the entire dairy industry, reaching far more people.

For example, in partnership with BRAC Dairy, CARE introduced digital milk fat testing to the country. CARE also orchestrated the Krishi Utsho microfranchising network of nearly 50 input shops, which serve entire regions. Cattle health information cards were also introduced to the sector and have spread through wider adoption. Farmer groups initially organised by CARE are given the tools and training to graduate and become self-sustaining. Designing interventions from the start to harness market forces and leverage the existing interests of value chain participants helps achieve scale for new technologies and practices.

First, markets work more effectively when power relationships are rebalanced in favour of poor producers. This includes enhancements (such as forming producer groups) that give them more bargaining power, freedom and choice.

Second, markets work more effectively for poor producers when those producers have the information they need – both knowledge about dairying practices and information about market prices and opportunities.

Third, markets work for poor producers when they have access to the productivity-enhancing inputs and technologies (such as artificial insemination) that they need to produce more with less.

And fourth, markets work for poor producers when those markets contain lower risk and less uncertainty (both of which we’ve seen as a result of improved fat testing methods).

The extensive work that has gone into making markets work for smallholder farmers in Bangladesh has many lessons that can be applied to other agricultural value chains in other countries. To learn more about CARE’s approach, watch this short video or get more details about the book.

Kevin McKague is Associate Professor of Social Entrepreneurship and Strategy at the Shannon School of Business, Cape Breton University, Canada.

Kevin McKague is Associate Professor of Social Entrepreneurship and Strategy at the Shannon School of Business, Cape Breton University, Canada.

More in this category: « Resilient markets: The key messages from CARE’s new paper From Bad to Extreme – the deteriorating situation for women and girls in South Sudan's war »