CARE event: Panel discussion on child marriage in emergencies at the House of Lords, 2 July

The APPG on Population, Development and Reproductive Health in collaboration with CARE International is holding a panel discussion in the House of Lords on 2 July on talking points and issues from a forthcoming CARE International paper on Child Marriage in Emergencies.

A call to action on gender and humanitarian reform: What happened at the high-level review at the UN General Assembly of the Call to Action?

Yesterday (22 September 2014) at the UN General Assembly in New York, John Kerry, US Secretary of State, convened a ministerial meeting to review progress on the Call to Action on Violence Against Women and Girls in Emergencies. What were the highlights and key points? And what needs to happen to get the Call to Action out of the ‘gender silo’ and into the heart of wider humanitarian reforms ahead of the World Humanitarian Summit in 2016?

Follow the money: How UN commitments to protect women and girls in emergencies can be translated into action

As world leaders meet at the UN General Assembly, US Secretary of State John Kerry is holding a high-level review of the global ‘Call to Action on Violence Against Women and Girls in Emergencies’. But what is the best way to hold donors and aid agencies accountable for the commitments they have made on gender issues?

CARE had a big role at the Global Summit to End Sexual Violence in Conflict in June – and you’ve read on Insights what we think the Summit achieved, and what are the challenges ahead. But what is CARE doing now to turn the talk into action?

Five ways to turn around the debate on migration

CARE's conference on Women, Migration and Development (July 2014), organised in partnership with the Overseas Development Institute, examined the extent to which migrants the world over suffer stigma and discrimination. The conference included a session on the media and its role and responsibility in shaping policy and opinion on migration. Delegates discussed the way in which negative portrayal of migrants in the media contributes significantly to reinforcing prejudices and presents a big obstacle to challenging negative attitudes and stereotyping around migration.

Ending sexual violence: A safe toilet is only one, small piece of the jigsaw

Syrian refugees fleeing the now 3-year-old conflict have faced rape during raids by security forces, and rape and sexual assault is so prevalent that women and girl refugees cited it as the main reason they left their country. Yet when they arrive to their supposed sanctuary and refuge, they are faced with the prospect of sexual violence and harassment at a communal toilet block. 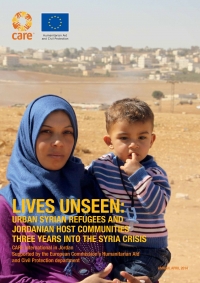 With the Syria crisis entering its fourth year, the resources of many longer term Syrian refugees in Jordan are being depleted, while other Syrians are just arriving—often with few resources. With increasing needs, the capacities of Jordanian service providers, community-based organizations, and humanitarian actors are stretched. Setting the right programme priorities and identifying the most vulnerable households thus is now more important than ever to ensure different groups—particularly the most vulnerable Syrian men, women, girls, and boys—receive the assistance they need while awaiting return.

The present study aims to enhance all stakeholders’ understanding of the needs, vulnerabilities, and capacities of Syrian refugees and vulnerable hostcommunity members across the four urban areas in Jordan that host the largest number of refugees—Amman, Irbid, Mufraq, and Zarqa. The goal is to contribute to the growing data available by providing community views on needs, vulnerabilities, and capacities, as well as by identifying trends by comparing data with results from the two baseline studies that CARE conducted on the situation of urban refugees in Amman (2012) and in Irbid, Madaba, Mufraq, and Zarqa (2013).

With the crisis becoming protracted, the effects on vulnerable host communities and on community relations increasingly demand all stakeholders’ attention. As the present study shows, Syrian refugees and vulnerable Jordanian families often share common concerns and needs, and they frequently extend support to each other. Therefore, midterm program options need to be developed that both help maintain community relations and ensure vulnerable Jordanian and Syrian families receive the support they need and do not feel they are competing over resources and access to services.