Arab Spring or Arab Autumn? The West should support Arab women to speak out 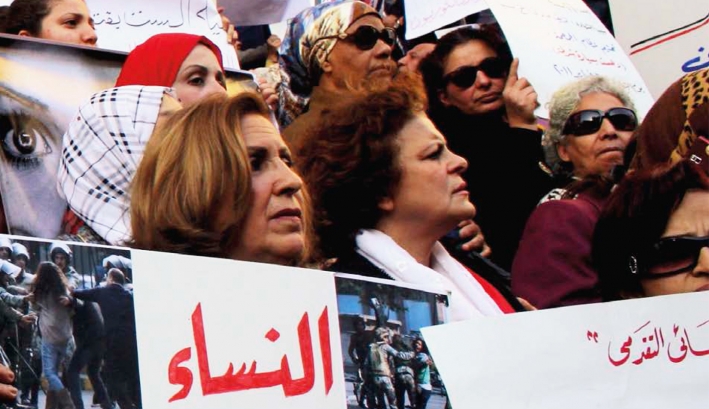 Take a look at news photos of the protests in Egypt that led to the overthrow of the Mubarak regime in February 2011, as I did recently, and it already feels as though you are looking back on a bygone era. At the time, western observers were shocked to see so many women among the protestors. Two and a half years on, nobody is any longer surprised to see women out on the streets, making their voices heard - nor, when demonstrations have been met with violence, to see their names among the lists of dead.

Talk of an 'Arab Spring' has long been replaced by dark warnings of an 'Arab Winter'; in countries where politics have been bent out of shape by decades of authoritarianism, democracy and gender equality have not, alas, appeared overnight. But for western observers to swing from wild hope to fatalistic despair about the future of women's political participation in shaping the Middle East would be wrong.

The uprisings of 2011 were overwhelmingly the work of young men and women with an inclusive, pluralistic vision of how they want their countries to be governed. The experience and idealism of this generation is a rich resource waiting to be tapped. The multitude of small groups that sprung up during the uprisings constitutes a vibrant civil society which western governments and aid organisations should be reaching out to and learning from.

A narrow view of the Middle East

For years Europe and the US have viewed the Middle East through a narrow geostrategic lens that has prioritised 'stability' defined in terms of their security and economic agendas over democracy and human rights. Western governments' pro-democracy initiatives, such as tokenistic funding for civil society groups, have done little more than tinker at the edges of authoritarianism.

The uprisings of 2011 proved that such an approach is destined to fail: no government that ignores the wishes of its people, standing by while inequality deepens and popular discontent grows, can remain stable forever.

If western governments and institutions are serious about encouraging Middle Eastern governments to adopt democratic reforms, they can take a simple step. In their dealings with the new governments of countries like Egypt, Yemen and Tunisia, they can make financial and political support conditional on including young people - especially women, who have historically been the most side-lined group - in the political process.

So why is the west failing to make democracy and women's rights central to aid and trade policies in the region? Why does the EU's aid package to the region - which is supposed to link funding to democratic reform - make no mention of women's rights among the benchmarks governments must meet to keep the money flowing? And why do IMF loans to Middle Eastern governments require them to implement private sector reforms and attract foreign investment but say nothing about democratic reform or women's rights?

An astonishing 60% of people in Arab countries are under 30, and though these young people have not yet succeeded in turning their democratic hopes into reality, they have not gone away.

It is the hope of social justice, that was bravely fought for in 2011, that western powers should support now.

Update: William Hague talks about CARE's recent report on women's political participation in the Arab Spring uprisings and beyond, as well as what the UK Foreign Office and CARE International are doing to fight sexual violence in conflict and achieve full social and political equality for women.

Sherine Ibrahim was formerly Deputy Regional Director for CARE International in the Middle East, responsible for ensuring the quality of CARE’s programmes in the region and working to promote gender equality and girls’ and women’s empowerment. She started her career in international development as a researcher in Egypt on women’s sexual and reproductive health rights. Since then, Sherine has worked extensively in Egypt, South Asia, the US and Middle East. She holds Masters Degrees from the American University in Cairo and from the London School of Economics and Political Science.

More in this category: « Democratic decision-making in global food security policy Recovering after disasters: Why ‘building back safer’ is better than ‘building back better’ »