Home // Development Blog // Follow the money: How UN commitments to protect women and girls in emergencies can be translated into action

Follow the money: How UN commitments to protect women and girls in emergencies can be translated into action 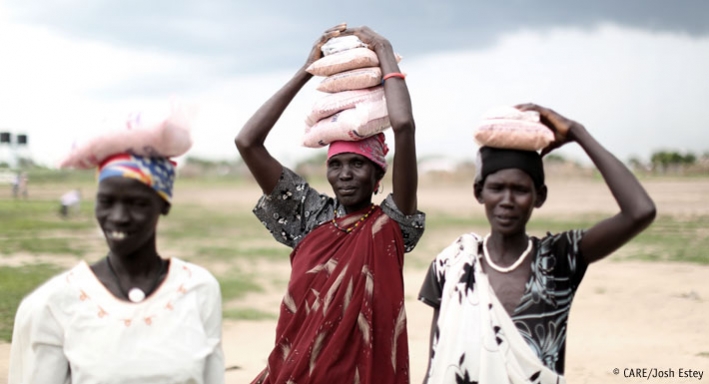 Women carrying seeds distributed by CARE to households in Jonglei, one of the areas most affected by the conflict in South Sudan © CARE/Josh Estey

As world leaders meet at the UN General Assembly, US Secretary of State John Kerry is holding a high-level review of the global ‘Call to Action on Violence Against Women and Girls in Emergencies’. But what is the best way to hold donors and aid agencies accountable for the commitments they have made on gender issues?

We know that when conflicts or natural disasters strike, the impact on women and girls is shaped in specific and different ways by their gender. We know what the risks are – from rape and sexual violence, to lack of adequate health care (one in five women displaced as a result of war, famine or natural disaster is likely to be pregnant). So why, despite all the high-level events and political declarations on these issues, are we still not doing enough for women and girls when we respond to emergencies?

At a meeting of the UN General Assembly today (22 September), US Secretary of State John Kerry is holding a high-level review of global commitments made to protect women and girls in emergencies. One of those commitments – made in the ‘Keep Her Safe’ Call to Action issued in November 2013 – was for institutions to hold themselves accountable for addressing gender equity and gender-based violence in emergencies.

That’s all well and good, but vague. The commitment is there, but a coherent global approach to follow through on it is lacking.

Yet the opportunity to do so is clear. One of the simplest ways to hold any institution accountable is to monitor how and where it spends money. The humanitarian system actually has a tool to do this called the ‘Gender Marker.’ The tool categorises at the proposal stage whether emergency projects seek to address a specific gender objective (such as addressing violence against women and girls) as their primary goal; mainstream gender amongst other objectives; or appear effectively gender-blind.

The problem is simply that the tool is a rather blunt one and does not capture the different aspects of a gender approach in an emergency response. Furthermore, it is not used very consistently.

To coincide with today’s review of the Call to Action at the UN, CARE International, for which I am the Humanitarian Director, and a research institute, Development Initiatives, are publishing research analysing global humanitarian funding using the Gender Marker. Alas, the findings are pretty shocking. Last year, research by CARE found that 54% of humanitarian projects in the Democratic Republic of Congo (DRC) were rated ‘gender blind’ using the UN system. The new research from Development Initiatives suggests that, as of September 2014, 80% of funding to the DRC is currently categorised as ‘unspecified’ – meaning that we don’t know if it is addressing gender-based needs, or not.

Given the huge amount of political and media attention directed to the problem of gender-based violence in the DRC, these statistics are worrying. If we are not getting this right in the DRC, then how are we doing elsewhere?

CARE International believes that to hold aid agencies accountable, we need a Gender Marker system that goes beyond the project proposal stage to influence what actually happens when aid is delivered on the ground. To make sure we are actually following through on our commitments, CARE has been trying out a new approach to Gender Marking in our responses to the crises in Syria and the Sahel region of sub-Saharan Africa. We call this the ‘Gender Marker ++’ system because it scrutinises not just how we address gender in the design of projects, but also throughout their implementation, monitoring and evaluation.

Six months into this experiment and the results are promising. An independent review has found the Gender Marker ++ is making a real difference by making gender a priority in decision-making by our staff and civil society partner organisations on the ground. For example, in our support for communities affected by the Syrian crisis, we provided gender-specific dignity kits, including sanitary towels, which are often not included in emergency aid packages.

We don’t claim to have all the answers and are still working out how to best assess our gender efforts at different stages of a crisis. We all know that the dynamics of an emergency response are inevitably different at the six-week, three-month and six-month stages, for example. But from what we’ve seen so far, we believe a Gender Marker ++ system could be a big step towards making sure that the needs of women and girls (and of men and boys who are also vulnerable to gender-based violence during crisis situations) are met by global emergency responses.

The right help where it is needed

Following pressure from parliaments, the public and agencies like my own, donor governments are starting to use Gender Markers and similar tools to demonstrate accountability for their commitments on gender. Making sure this translates into delivering the right help where it is needed should be a priority not just for the few donors and NGOs interested in gender, but for the humanitarian sector as a whole. For this reason, clarifying a global approach to Gender Markers should also be integrated into the wider deliberations on aid effectiveness leading up to the 2016 World Humanitarian Summit.

Five days before the Call to Action was first launched back in November 2013, Typhoon Haiyan struck the Philippines. Donor governments and UN agencies met shortly afterwards to discuss how to deliver the Call to Action commitments in the international response to the typhoon. A review this June found that funding and experts to address gender were indeed mobilised. Perhaps as a consequence of this, the UN Gender Marker system suggests that the response scores high on gender at the proposal stage. Yet the review also found that the overwhelming scale of the crisis meant humanitarian agencies struggled to consistently factor the specific risks faced by women and girls into their efforts on the ground. Addressing gender in emergency response efforts needs to become systematic. While it’s not a silver bullet, a Gender Marker ++ system should definitively be part of a more comprehensive approach.

So as John Kerry and many other important leaders convene in New York today, we hope the next phase of the Call to Action translates the global commitment on accountability into action on the ground, and that a Gender Marker ++ is a critical piece at the heart of these efforts.