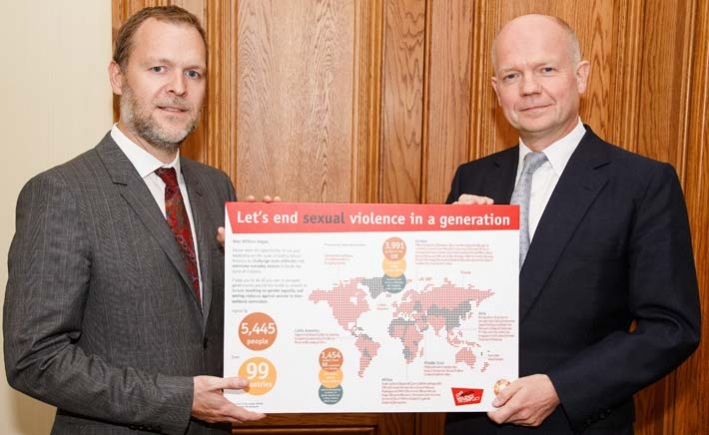 CARE had a big role at the Global Summit to End Sexual Violence in Conflict in June – and you’ve read on Insights what we think the Summit achieved, and what are the challenges ahead. But what is CARE doing now to turn the talk into action?

On 10 June 2014, CARE International UK’s chief executive, Laurie Lee, handed a petition to William Hague, Leader of the House of Commons and Prime Minister’s Special Representative on Ending Sexual Violence in Conflict, calling on the British Government to champion efforts to bring the engagement of men and boys in preventing gender violence into the national education curricula of countries worldwide.

Over 5,400 activists from 99 countries around the world signed the petition. CARE partnered with Laura Bates of the Everyday Sexism project to rally support for the cause, and many of the signatories are activists in women’s rights groups and networks – people on the frontline of combating gender-based violence whether in the UK or in conflict affected states.

William Hague said: “I am delighted to receive this petition. The number of signatories and the breadth of countries show the strength of support around the world for ending both sexual violence in conflict and tackling violence against women and girls. Education is a key to all of our efforts. I strongly welcome CARE International’s work in this area, as well as their commitment to the Preventing Sexual Violence Initiative, which has helped to generate a powerful global momentum for change.”

Following the petition handover, Hague and Lee followed up on the issues raised by the petition in a meeting of the Steering Board on the British government’s Preventing Sexual Violence Initiative. CARE has been on the Steering Board to the Hague-led Preventing Sexual Violence Initiative (PSVI) from the outset. In 2013 William Hague and Angelina Jolie visited a CARE run refugee camp in the DRC, escorted by CARE DRC Country Director Yawo Douvon.

In the discussion on 10 June, CARE shared proposals on how experience in the Balkans on bringing gender equality and violence reduction into the curriculum might be adapted and piloted in other contexts, including the Great Lakes region in Africa. Already initial contacts with the Ministry of Gender, the Family and the Child in the DRC and elsewhere in that region has indicated a willingness from government and civil society contacts to explore these ideas. CARE looks forward to further collaboration both with the British government’s PSVI team and with states and activists in countries affected by war to translate this call for action on engaging men and boys on gender violence into reality.

CARE has for many years worked to support survivors of gender-based violence in countries torn apart by war, and we played a lead role in feeding in perspectives from field staff in the run-up to the landmark UN Security Council Resolution 1820 on conflict-related sexual violence, which was seen as bringing a humanitarian perspective to the process. We are now currently playing a lead role in global inter-agency efforts to catalyse follow-up to the Call to Action on Violence Against Women and Girls in Emergencies. We are pushing for an EU roundtable in November on EU member state and ECHO (European Commission – Humanitarian Aid and Civil Protection) implementation of the Call to Action. And we are feeding into a position paper for the global GBV Area of Responsibility (GBV AoR) on the Call to Action, which is the main UN-NGO coordination body on the humanitarian GBV response, prior to the US-hosted High-Level Review at the UN General Assembly later this month.

More in this category: « What your BOP strategy is missing: A gender lens Follow the money: How UN commitments to protect women and girls in emergencies can be translated into action »