Thanks for the ESVC Summit Mr Hague and Ms Jolie, but did we get what we hoped for? 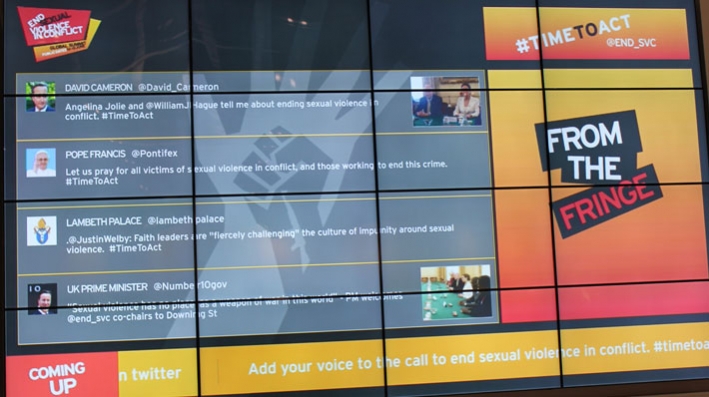 An electronic display board at the Global Summit © CARE

Two weeks on from the summit to End Sexual Violence in Conflict and the dust is starting to settle. The positives outweigh the negatives so what next for the issue of gender-based violence and conflict, and what next for CARE?

Summit outcomes – More of the same or something new?

The Global Summit brought together over 1,000 activists, experts, donors and government representatives in a huge surge of energy, promises and pledges on the issue of tackling sexual violence in conflict. Prior to the event, some had warned of a sense of déja vu, with past experiences at global summits showing that talk is always cheaper and easier to deliver than the change required on the ground.

By contrast I was perhaps more optimistic, hoping that the mixing of activists and policy-makers, and the demonstration of political will, would if nothing else give us the chance to hold people in power to account and stand as a milestone in the struggle to tackle the phenomenon of rape and sexual violence in conflict. So what in fact happened, who was right?

Actions from the summit

In the end both views have some weight to them. Specific actions were agreed, with over 120 countries and 80 ministers coming together and showing support for the new international protocol on documenting and investigating sexual violence in conflict – the first of its kind.

Six non-OECD countries (Liberia, Mexico, Morocco, Occupied Palestinian Territories, Senegal and South Korea) signed up to the Call to Action, which pushes 12 specific ways of preventing and responding to violence against women and girls in emergencies. This now goes forward to the UN General Assembly in September under the leadership of the USA.

Equally, individual countries announced specific actions they would take, from giving more funding, to new strategies to tackle sexual and gender-based violence such as those detailed by Somalia and the DRC. According to the session with the government of Somalia, it seems women will no longer be subject to arrest for simply reporting the crime of rape.

In terms of accountability – as my colleague Howard Mollett wrote on this blog live from the closing plenary – there was a noticeable openness by policy-makers to meet and mingle with activists, which felt distinctly different from other similar events. Our staff from Ecuador and Sri Lanka for instance had unique access to high-level officials and took the opportunity to press their points in private.

However, with so many of the best minds in the world gathered together it was a shame that so few concrete actions emerged from the summit. Perhaps more experts could have fed into the ministerial sessions directly.

That said, I heard time and again from experts of all types saying that we already have the knowledge and the skills, we just lack the political will to make the changes happen. If nothing else the summit showed that many politicians from all parts of the world are willing to speak out in public and invest their time and political capital in getting things done.

Will this then be the sea-change we were hoping for? Only time will tell. Summits will always be a ‘talk shop’ first and foremost. It now falls to activists, NGOs, the media and voters to make sure the promises are upheld.

For CARE, the successes will also take some time to play out. We always thought that it was unlikely governments would immediately commit to our petition request for gender equality and respect in relationships to feature on the national curricula of all countries. Over 5,000 signatures on the petition is a huge first step but we also met or heard from organisations such as UNICEF and Sonke Gender Justice who have similar goals, and identified countries such as the DRC, Rwanda and Burundi where the governments are warm to the idea.

Our next step is to focus the campaign to these local contexts with a group of partners and take it forward there. Also in the Great Lakes region, civil society organisations including CARE will soon be presenting evidence to the ICGLR (International Conference on the Great Lakes Region) heads of state on how far their countries have come in implementing the Kampala declaration. Accountability never sleeps.

At the global level, we will continue to champion the Call to Action, through CARE USA ahead of the UN General Assembly in September; and when the Preventing Sexual Violence Initiative is reviewed by the G8 under the presidency of Germany in 2015, we will be there again to ensure the tough questions are asked and gaps discussed.

Internally we learnt some important lessons. Our big social media push was a first and we were right to use our global presence to bring staff and partners from around the world to London so they could speak from the platform offered by the summit. Using our reach we succeeded in getting our messages to delegations from Asia to Latin America before they arrived in London, and we used the summit space to multiply the impact of our individual advocacy efforts by working together as a federation and speaking with one voice.

This is not the end

The posters have come down, the delegates have left, and the rooms at the ExCeL centre are back to being used for business conferences for insurers and auditors. The immediate attention will now shift to New York in September, but for CARE the work on the ground never stops. Next week I fly to South Sudan to a context where rape is once again being used as a weapon in a conflict. In the final analysis, the summit was about ending suffering from conflict-related sexual violence both now and in the future. On this basis, there is still much work to be done.

More in this category: « My vision for the future of the mining industry Modelling social accountability in the Global Goals: Citizen-led measurement in Bangladesh »