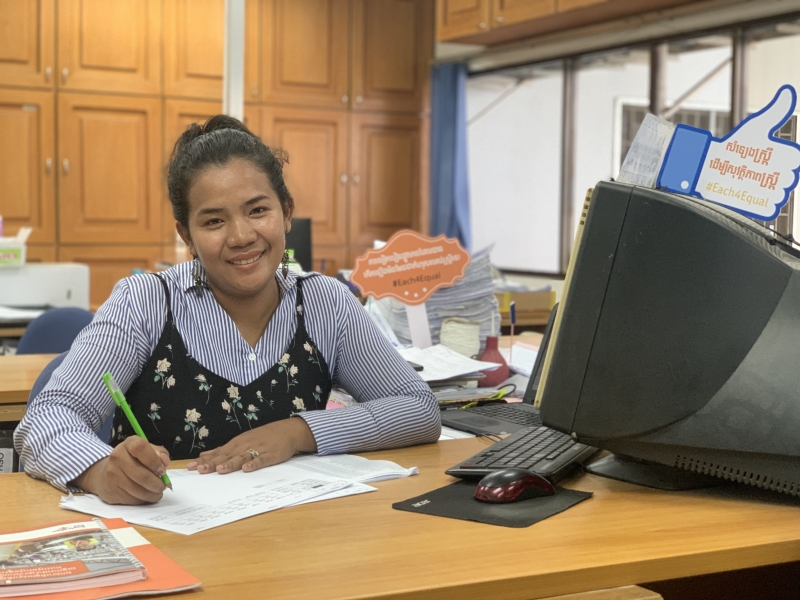 Chakrya, a compliance officer at a factory in Cambodia, is also a member of the factory's sexual harassment committee

“I felt humiliated and could not focus on my work after I was harassed by my co-worker. I decided to report to the sexual harassment prevention committee because I trust them.” Pha*, a garment worker in Cambodia, is employed by a factory which has been working with CARE to improve how they respond to reports of workplace sexual harassment. We helped them build an environment where gender-based violence is not tolerated and women are more confident to report incidents of abuse.

Nearly 1 in 2 women working in garment factories in South-East Asia have been sexually harassed in their workplaces, while commuting and in worker communities. Sexual harassment has a massive cost to national economies, industry and individual businesses—research in Cambodia estimated the productivity costs of sexual harassment could be as much as USD $89 million per year.

The solution may sound simple and unexciting but is proving effective: better workplace policies, clearer guidelines and comprehensive mechanisms for reporting and responding to incidents.

The Enhancing Women’s Voice to STOP Sexual Harassment (STOP) project, funded by the Australian Government, has worked to address sexual harassment in the garment sector since 2017. Taking the Sexual Harassment Prevention package originally developed with industry in Cambodia and expanding this to Laos, Myanmar and Vietnam, the project worked with 42 factories in four countries to reach more than 150,000 people.

How did it happen?

STOP’s Regional Reflection report was launched at the recent Learning Summit on new tools to address gender-based violence and harassment in garment supply chains, organised by CARE and Better Work. Visit the event site for links to a recording of the session and further resources.

The full Regional Reflection report and the Regional Impact Summary are available at care.org.au/stop.