Ratifying Convention 190 – how countries are encouraging action on workplace violence 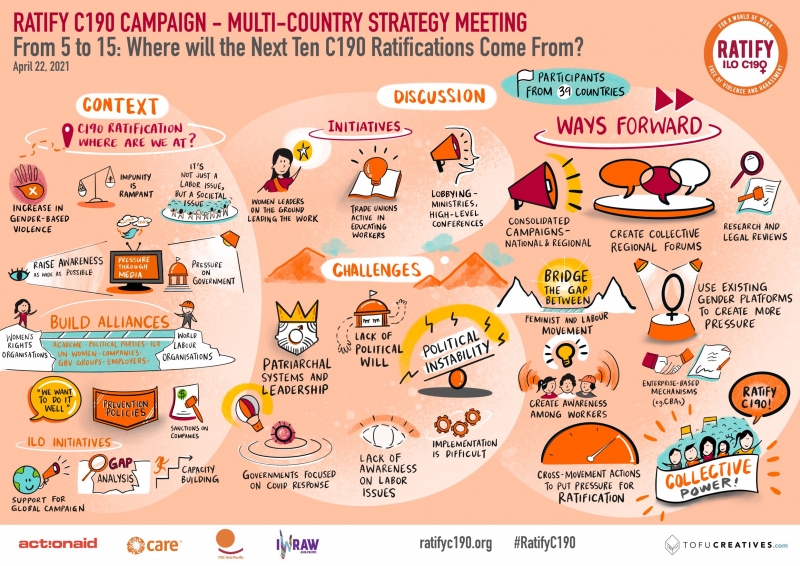 Event summary - Where will the next 10 C190 ratifications come from?

Violence and harassment in the world of work is not just a labour issue but a societal issue, particularly given the ‘shadow pandemic’ of gender-based violence resulting from the COVID-19 pandemic. How are national and regional organisations taking action to ensure workers are protected from violence—and what has been learnt about what works?

Earlier this year, CARE’s Senior Economic Advisor Hester Le Roux wrote about the significance of ILO Convention 190, adopted in June 2019, for addressing this issue. The Convention recognises the right of everyone to work free from violence and harassment; however we now need governments to ratify this international labour standard if it is to make a difference to workers on the ground. So far only five countries have ratified (Uruguay, Fiji, Namibia, Argentina and Somalia) and two more have secured approval for ratification through national-level votes (Ecuador and Italy).

The Ratify C190 campaign wants to maintain this momentum, aiming to take the number of ratifications from five to 15 and beyond. A variety of organisations are already taking action in many countries, creating opportunities to support and amplify their efforts. In late April 2021 more than 100 people from 39 countries came together to share strategies for encouraging their country to ratify the Convention, building relationships with others working towards the same goal. This collaboration helped paint a picture of progress and highlight the key tactics being used.

We are already seeing strong national movements which speak with a unified voice on the importance of ratification in countries such as Pakistan, Nepal and Indonesia. Some of these are already actively engaged in influencing governments, employers and workers’ organisations—the tripartite actors acknowledged to be crucial for achieving ratification. However, representatives from many other countries noted that while there are various organisations working independently to push for ratification, these efforts could be stronger if they work together. The RatifyC190 campaign’s online hub aims to bring together more organisations to make this collaboration a reality.

In some countries, there are also varying levels of awareness on the opportunities the Convention presents, with many stakeholders such as CSOs and worker organisations unclear on the ratification process and what this means. Building national alliances and sharing resources can support greater understanding and engagement. For example, while there is not yet a formalised cross-country movement in Bangladesh, a number of organisations focused on gender are exploring opportunities for collaborating further to conduct a national C190 Ratification Campaign.

Seeking out multiple perspectives to build the evidence base

Collaboration which brings together a diverse range of partners with a variety of perspectives on violence and harassment in the world of work is helping build a strong case for ratification. A diverse range of partners enables coalitions to highlight multiple dimensions of the issue—particularly important as workplace harassment has such clear implications for both labour rights and gender equality.

For example, emphasising the specific needs of particular sectors or demographics, such as domestic workers or informal workers, helps increase understanding of the harmful impacts of workplace violence and harassment. Research on prevalence and the economic cost of harassment to specific sectors helps build the overall evidence base justifying the need for action.

There are many examples of organisations building the national and global evidence base to support ratification through both in-depth research and qualitative case studies. In Cambodia, ActionAid are collecting case studies on harassment and violence of workers in the entertainment sector, while CARE has anlaysed the productivity cost of sexual harassment to the garment industry. In Nepal, CARE and HomeNet Nepal are collecting cases and analysing the political economy to support a position paper to influence government. In Malaysia, research is being conducted on the economic harm to workers from harassment in global supply chains and on migrant workers in the garment industry.

The context of the world of work is also constantly evolving because of the COVID-19 pandemic. The European Trade Union Confederation (ETUC) published survey findings which show the need for updated policies to reflect the realities of working from home and the additional threats workers experience as a result of COVID-19.

Relevant research is already available through the RatifyC190 campaign’s online hub; organisations are encouraged to share further research via the website to add to the overall evidence base.

At national level, many organisations are contributing to overall understanding of the Convention and what it means for their country by linking this with existing laws. At minimum, organisations are translating the Convention to facilitate wider understanding. Legal gap analyses are a useful tool for assessing how the provisions in relevant national laws relating to labour and gender-based violence already align with Convention 190 and what gaps exist. Analysis such as this provides entry points for discussion – both on how the country is already addressing the principles of the Convention and where further action is needed.

In some countries this analysis has already taken place. For example, a 2018 analysis of legal frameworks across the Mekong sub-region highlighted existing laws and regulations relating to sexual harassment in the workplace and their relevance to garment supply chains. In Bangladesh, ActionAid, CARE and the Bangladesh Institute of Labour Studies (BILS) are conducting a legal gap analysis aligned with C190, looking especially at provisions to address Gender-Based Violence and Harassment in the World of Work in Bangladesh’s Labour Act. Organisations in other countries have indicated their desire to start this process—something which the ILO can support. The RatifyC190 campaign is keen to consolidate resources such as these to avoid duplication of effort within countries, share effective methodologies to inspire action in other contexts, and ensure tools are available to as many partners as possible.

In some contexts, the existence of a Convention on violence and harassment in the world of work provides recognised global standards which can be helpful when advocating for these concerns in other policy reforms which will benefit workers. For example, a coordinated influencing campaign in Vietnam helped secure inclusion of sexual harassment prevention provisions in the Revised Labor Code. In Cambodia, CARE focused on the third National Action Plan for Prevention of Violence Against Women, ensuring this included reference to development of minimum standards for addressing workplace sexual harassment. The more that current national policies align with Convention 190, the stronger the case for countries to then ratify it.

Many countries have already seen a wide range of initiatives to raise awareness and encourage ratification.

Some of this has focused on engaging directly with employers and trade unions to build support. In Bangladesh, policy briefs and toolkits have targeted employers in the ready-made garment sector, with training conducted for mid-level management and brands. In Timor Leste, trade unions are doing capacity building for leaders to raise awareness of the Convention. In Pakistan, CARE, ILO Pakistan and the National Commission on the Status of Women led provincial consultations encouraging ratification of Convention 190, which saw active participation from the Pakistan Workers Federation and Employers Federation.

In other contexts, campaigns are focused on sensitizing government. In India, awareness efforts were supported through a national-level consultation with participation of relevant stakeholders from the government, employers, workers’ unions, and CSOs, which progressed to state and local levels through gender champions and organisations’ existing relationships with communities.

Broader campaigns are building awareness to catalyse action. Some of these have focussed on mass engagement using social media. In Timor Leste, trade unions and CSOs are campaigning online; in Pakistan, an online signature campaign was organised by the Pakistan Workers Federation, Chamber of Commerce and Industry, National Commission on the Status of Women and CARE.

A challenge for organisations in many countries is that the issue of Convention 190 ratification is less of a priority for governments given the impacts of the global COVID-19 pandemic. This has stalled many plans as CSOs intensify their negotiation with the government. Political instability and interim governments in a number of countries is also hindering progress.

But despite the extreme challenges the world is facing from COVID-19, its impact on workers makes ratification even more important than ever. In particular, the implications of the shadow pandemic highlight the need to increase protections from violence and harassment in the world of work. The coalition of organisations driving the RatifyC190 campaign aim to maintain momentum to ensure Convention 190 remains a priority and drive the next wave of ratifications.

More in this category: « ILO Violence and Harassment Convention: Taking stock of progress in the Asia-Pacific region How one factory initiative to keep women safe inspired industry-wide standards »