Home // Development Blog // International Women’s Day: What needs to happen on #BalanceforBetter in the humanitarian sector

International Women’s Day: What needs to happen on #BalanceforBetter in the humanitarian sector 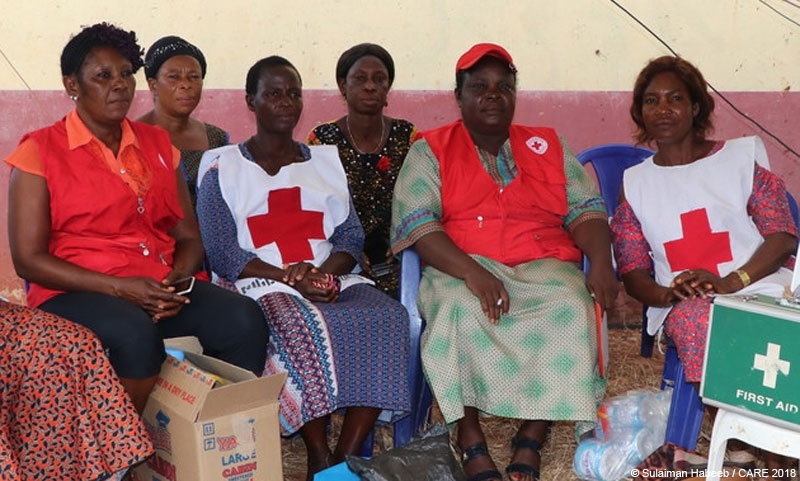 This year’s theme for International Women’s Day is #BalanceforBetter – a call-to-action for driving gender balance across the world. Working for CARE’s humanitarian team, we know all too well the very specific challenges facing #BalanceforBetter in life-saving emergency response, write Isadora Quay and Howard Mollett.

As Salama Mubarak, a Yemeni Humanitarian Practitioner, shared at a recent event to discuss these issues, hosted by CARE in Geneva:

“The mothers of detainees association in Yemen achieved more with very little resources than the entire UN system could to secure the release of detainees. Women-led groups have got aid into Taiz, Aden and elsewhere. They risk their lives, but the traditional humanitarian system doesn’t support them enough. In seven years of humanitarian work in Yemen, I participated in only two sessions that raised the issue of harassment or the other challenges such women face.”

For a long time, many in humanitarian agencies argued that faced with the vast and devastating impacts of tsunamis, earthquakes and violent conflict, there simply isn’t the time to think about the complexities of ensuring a gender-balanced humanitarian workforce. When people are dying in their thousands, everything needs to focus on hiring in engineers, logisticians, medics and others who can help save lives.

While saving lives has to be paramount, it has become increasingly obvious that humanitarian agencies cannot just put gender balance into the ‘too difficult’ or ‘leave it to later’ boxes.

Nothing has made this more obvious than the incidents of sexual exploitation, harassment and abuse which came into the spotlight over the past year. While the head offices of many aid organisations are staffed largely by women, in emergency contexts, humanitarian teams are often largely dominated by men. And whilst gender balance is not the only way to help prevent or respond to incidents of harassment, it has to be a key part of addressing the problem.

Importantly, when we talk to female staff of CARE and women in crisis-affected communities, it becomes clear that gender balance needs to be accompanied by a wider effort to address diversity, inclusion and organisational accountability in aid agencies. More white, middle-class women from the global north is not diversity. And tackling gender equity, diversity, inclusion and accountability is a real challenge for individual aid agencies, but also for the wider humanitarian system.

Start at the top

When he came into his role, UN Secretary General Antonio Guterres made gender balance a priority for the UN system, which is great. Scandals that emerged over recent years about abusive behaviours within the UN system mean it’s no easy task. The UN Strategy on Gender Parity sets targets and monitors progress in areas like recruitment and retention, and creating an enabling environment.

In terms of the UN’s humanitarian work, he could start at the top. In each country affected by a crisis, the UN deploys a ‘Humanitarian Coordinator’ (HC). At present, the terms of reference for HCs do not mention gender issues (whilst the equivalent UN role on development issues, the ‘Resident Coordinators’, do). This clearly needs to change.

But focusing at the senior level is not enough. There needs to be a longer-term investment in giving women from the global south, and especially those from less privileged backgrounds, opportunities to rise up the career ladder. It is telling that a recent review of efforts by the UN GenCap (Gender Standby Capacity Project) team – which is linked to UN OCHA (Office of the Coordinator for Humanitarian Assistance) and responsible for deploying gender advisors to humanitarian responses – found that they struggled to recruit candidates with a suitable level of experience to take up GenCap roles.

That struggle does not mean there is a lack of smart, capable women from diverse backgrounds with valuable experience in crisis response. It is rather that the humanitarian sector has not invested in those women to get them to this level.

So what has CARE been doing, and what do we think the humanitarian sector as a whole should be doing?

CARE, together with Action Aid, published a report in 2017 – How can humanitarian organisations encourage more women in surge? – outlining key measures to achieve gender parity in the humanitarian sector. Our standing Global Rapid Response Team is currently 11 women and 9 men, and our wider emergency roster split is 292 men (56%) and 228 women (44%). In 2018 our emergency deployments were actually 52% women, 48% men.

Requests to deploy Gender in Emergencies and Gender-Based Violence (GBV) specialists into our responses has grown significantly. We have more women deploying in ‘non-traditional’ sectors like water/sanitation and shelter. And in our recent process to recruit a global Safety and Security Manager, we hired a recruitment agency with a reputation for addressing diversity; but even they came back to us with an initially all-male list of candidates. So we sent that list back and worked with them to take additional steps to get a gender-balanced pool. The person appointed is a woman.

Our progress has been slower at the national level in our Country Offices around the world. Much of this comes down to social norms about what a woman’s role is, and assumptions about what skills are required to staff humanitarian work. In contexts as varied as London to Kigali, we are investing in multi-year processes to promote organisational change to address gender equity and diversity.

Part of this involves putting all staff in two-day workshops to work through assumptions and experiences which shape beliefs and practices in each context. In addition, each office must undertake audits and develop action plans to enable gender equity and diversity.

Another important part of our work has been to invest in growing partnerships with women’s rights organisations – to both challenge us on our practices, and to explore how we might work together to address shared objectives like tackling gender-based violence.

We are quite excited about a recent effort to pilot partnerships on humanitarian response with local women’s rights groups in countries as diverse as Afghanistan, Greece, Lebanon, Jordan and Pakistan. Some of this work was kick-started through a grant from Hogan Lovells – a legal firm with a strong commitment to tackling gender-based violence. Combined with other funds, we tested-out new partnerships to explore what working with local women’s rights groups could look like in countries hosting refugees and affected by war.

The learning went in both directions. For example, with RDFL, a Lebanese NGO, we provided funding and technical advice to support their staff in dealing with the often stressful nature of providing assistance to refugees, including survivors of GBV. In Greece, we partnered with the Melissa Network of Migrant Women, and learned from them about their approaches to creating safe spaces for refugee and migrant women. This included creative, art-based activities that allow refugee women and girls to talk about their often traumatic experiences. Some of these women went on to tell their stories through advocacy and media opportunities; to shine a light on their situation and challenge government policies denying them a place of refuge.

Last but not least, we are changing how we work on gender and power in humanitarian decision-making through what we are calling ‘Women Lead in Emergencies’ piloting. This puts decision-making and money in the hands of groups of women directly affected by crisis so that they can themselves decide how best to advance women’s voice, influence and agendas. This is being piloted in Tonga, Uganda and Niger.

What needs to change?

So how does the wider humanitarian sector need to change on #BalanceforBetter?

Together with allies in the UN OCHA, UN Women, Plan International and the International Migration Organisation (IOM), we organised a workshop in Geneva on 6 February to discuss ways forward on gender in humanitarian action. The recommendations identified on humanitarian staffing were as follows:

The #BalanceforBetter conversation is a great opportunity to take stock. So any feedback on the options above or other suggestions from readers much appreciated. Here’s wishing you all an inspiring International Women’s Day, as well as the energy to translate ideas into action in the days to come!

Isadora Quay is Gender in Emergencies Coordinator for CARE International.