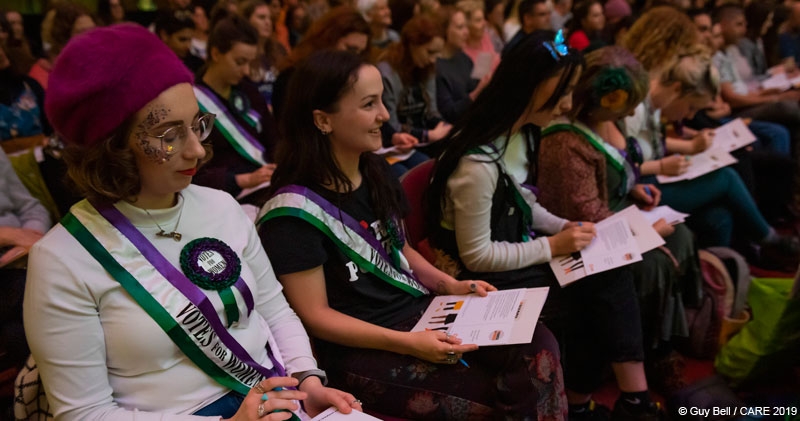 Participants at the #March4Women event in London signing postcards to Alok Sharma, UK Minister for Employment, to demand a strong ILO convention

This International Women’s Day, CARE International and our corporate partners Avon, Diageo, M&S and Unilever are commited to calling for a strong and progressive ILO Convention to end violence and harassment in the world of work. This letter is co-signed by Amy Greene (Avon), Mairead Nayager (Diageo), Fiona Sadler (M&S) and Laurie Lee (CARE International UK).

This statement has also been endorsed by business organisations Business Fights Poverty, B Team and BSR (on 10 June 2019, to mark the start of the International Labour Conference 10-21 June 2019).

As the world marks International Women’s Day, we are reminded of the great strides that have been made towards achieving gender equality. However, we also recognise that much more needs to be done to truly achieve equality as envisaged in the UN Sustainable Development Goals. We, the undersigned representatives of some of the world’s leading businesses, publicly reaffirm our commitment to use our access and resources to support progress towards gender equality.

Violence and harassment also persist in the workplace. 40% of women in the UK have experienced unwanted sexual behaviour in the workplace. Finding ways to prevent and better respond to gender-based violence is high on the agenda of many businesses: not only because it is the right thing to do, but also because there is a clear business case for taking action. Violence and harassment reduces productivity, increases employee cost and turnover and creates reputational risk. Productivity losses due to sexual harassment in the Cambodian garment industry amounts to USD 89 million every year.

To truly move the needle on ending gender-based violence we need global action. Over one-third of countries still do not have any laws prohibiting sexual harassment at work. An international standard is needed which will compel governments and employers around the world to provide workers with protection against violence and harassment.

That is why we call on our governments and representative employer organisations to support the new International Labour Organisation Convention to end violence and harassment in the world of work. A strong and progressive ILO Convention and accompanying Recommendation are needed as the first step to building global accountability on this issue. The final round of negotiations on this Convention will take place at the International Labour Conference in June. We urge all parties to the Conference to increase their efforts to reach agreement on a robust and inclusive new international labour standard which will help eradicate this unacceptable behaviour.

More in this category: « International Women’s Day: What needs to happen on #BalanceforBetter in the humanitarian sector Brussels conference III: #InvestinHumanity and long-term solutions for the Syrian people »