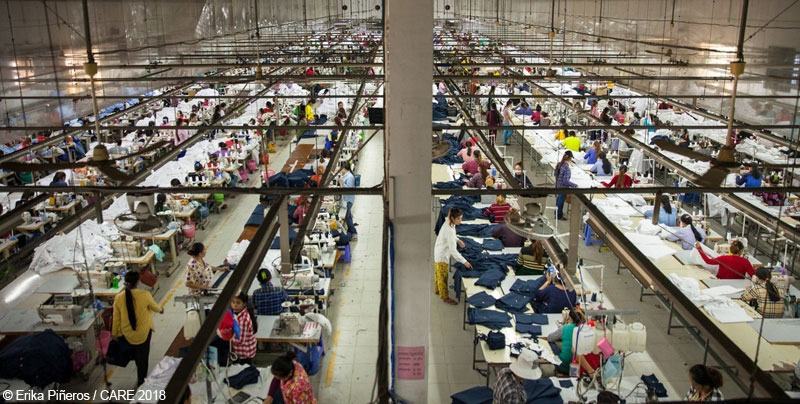 The CEO Agenda 2019 was launched at DAVOS by a number of leading fashion brands, with support from Global Fashion Agenda. It’s good to see major brands trying to tackle the ethical and environmental challenges facing the sector – and society more broadly – but the experience of CARE and our partners in civil society and the trade union movement demonstrates a number of important gaps in this Agenda and limitations to what it can achieve in its current form.

The Agenda sets out 8 priorities for the fashion industry to tackle.

We welcome CEOs stepping up to outline a unifying Agenda for the industry. Too often conversations with fashion brands and retailers about human rights and environmental sustainability are conducted at lower levels in the company, with individuals and teams who do not really have the power to make business decisions. However, the Agenda has some notable gaps, lacks detail and avoids tying brands to any commitments.

Eight priorities – but where is gender?

Gender is a glaring gap that the authors and leaders of the CEO Agenda need to rectify. CARE believes that respect for human rights is not possible without gender justice. 75% of garment workers around the world are women, but the CEO Agenda is noticeably gender blind.

The Agenda includes one reference to gender discrimination – that women workers in Pakistan are far less likely to be paid the legal minimum wage than their male counterparts – yet overt discrimination is just the tip of the iceberg. Women workers face systematic denial of their rights across a number of the priorities identified by the Agenda:

A herd of elephants in the room

It is great to see respect for human rights and better wage systems pulled out explicitly within the Agenda. However, it is noticeable that the Agenda skirts a number of core concepts and ideas which are widely agreed to be central to achieving respect for labour rights and environmental sustainability:

The fashion industry faces complex challenges, many of which are beyond the ability of brands and retailers to tackle alone. The Agenda frequently focuses most strongly on the importance of strengthening laws, regulatory environments and wage-setting mechanisms within garment sourcing countries in order to achieve change. Whilst this change is undoubtedly needed, it is only one part of the puzzle, and the Agenda appears to neatly side-step the reality that the fashion industry has played a central role in encouraging governments in sourcing countries to compete to be the most ‘business friendly’. For example:

The Agenda is correct to push for systemic solutions but in doing so appears to have side-stepped the central role that brands and retailers still need to play in transforming their own business model.

From an Agenda to a committed roadmap

The introduction to the Agenda makes it clear that the document only serves as ‘support for the dialogue in the industry to move in this direction,’ it is not a ‘commitment… to solve the issues listed within a given timeframe’. It does not provide a roadmap for how the industry would progress towards the proposed outcomes: lack of detail, no public commitments and no measurable targets means the Agenda lacks teeth. The Ethical Trading Initiative has provided clear recommendations for how the Agenda could be developed into a more meaningful, measurable vision; this feels like the right way forward.

The CEO Agenda is welcome in highlighting some key priorities for the fashion industry to address and starting to map out a vision that the industry could align behind. Nevertheless, the Agenda would benefit from being developed through more direct dialogue with other stakeholders, including trade unions and civil society, and with all levels of the fashion value chain. This would require the fashion industry to face up to some difficult truths about its existing business model and supply chain practices, but would lead the way to a more transformational vision and roadmap for the future.

I provide technical expertise for CARE globally on Dignified Work – CARE’s strategy for promoting access to gender-equitable, economically empowering jobs for women – with a focus on Asia. I joined CARE in 2016 and have led the development of our theory of change for Dignified Work and a regional Dignified Work strategy for Asia. I support CARE’s country offices with strategy development, new partnerships, programme design, knowledge management and learning.

Before joining CARE, I worked as an ethical trade consultant for three years, managing programmes across Asia and Africa to improve working conditions in global supply chains including: garments, footwear, electronics, home-furnishings and horticulture. I started my career in the international trade union movement, providing research support to global and national level trade unions.

My current priority is launching our new strategy on Dignified Work in Asia, focusing on improving women’s leadership, collective voice and representation in the garment industry.

There are a few books I always refer back to whenever I feel too caught up in the detail to see the broader picture. Ha-Joon Chang’s Bad Samaritans: The myth of free trade and the secret history of capitalism debunks the myth of free trade as a model for economic development; whilst Ronaldo Munck’s Globalisation and labour: The new “Great Transformation” is essential reading for anybody who wants to understand the impact of globalisation on work, economics and politics.

More in this category: « Offering insurance to help poor households with disaster risk management – reflections from CARE’s experience International Women’s Day: What needs to happen on #BalanceforBetter in the humanitarian sector »