Home // Development Blog // Involving communities in peace-building: why the next peace process in South Sudan must not repeat the mistakes of the past

Involving communities in peace-building: why the next peace process in South Sudan must not repeat the mistakes of the past 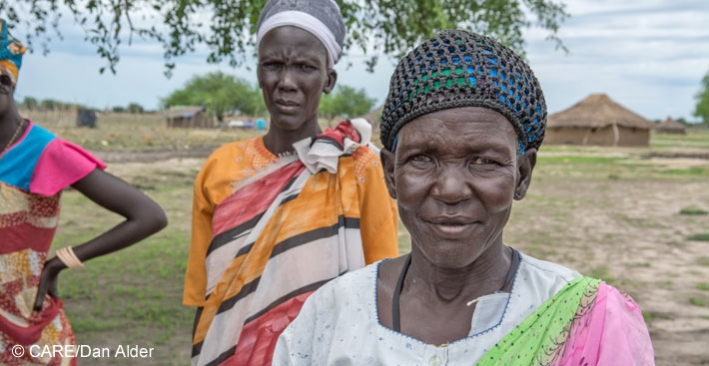 Aluat Deng Gach, widow and mother of 7, arriving at a meeting about a CARE livelihoods project in her village in Jonglei State © CARE/Dan Alder

Simon Chol is a peace-building advisor for CARE South Sudan and former combatant in the fight for independence. Three years after independence for South Sudan, Simon asks what went wrong, and how the same mistakes can be avoided again.

Independence for South Sudan came with high expectations. People hoped that peace would allow them to live their lives and go about their normal business, with children going to schools, or farmers working the fields. They hoped that the Comprehensive Peace Agreement that ended a decade of conflict with the North would offer a real opportunity for national healing and reconciliation.

Unfortunately, it was an opportunity wasted.

Experience over the many years of conflict has shown that political agreements seem mainly to benefit only political leaders. Communities are left out of the peace process, and when tensions rise again old wounds reopen. Past memories are triggered and blame and destruction can follow swiftly.

For instance, the need for grassroots peace-building and reconciliation was overlooked in 1991 when political tensions among the leadership of the independence movement led to clashes and killing between communities. While the political leadership agreed to share power and end the fighting, communities were never given the support to heal or come back together. A huge opportunity for long term peace was missed.

I believe this kind of gap, repeated many times over, laid the foundations for the violence which erupted in December 2013, and which has seen thousands of lives lost, massive destruction, and millions of people forced from their homes.

Given the scale of the destruction and the growing food crisis, I appreciate the initiative of the Addis Ababa peace talks between the government and the opposition, aimed at stopping the conflict and paving the way for peace. However, I am afraid that it may still end up as a political settlement between the politicians and will leave the gravely affected communities alone once again with their trauma and pain, and once again left out of the peace.

Instead I want to see real and sustainable peace in my country. Here are six things that must happen if we are to avoid future tensions leading to conflict again.

Without involving local communities in the peace process, peace-building and reconciliation will always be difficult in South Sudan, because local people and communities are the ones most affected by conflict, and the ones left with the pain of loss after the conflict ends. Working with grassroots communities would lay a solid foundation for the rebuilding of the broken relationships and trust that these communities once had.

Throughout the peace period, prior to joining CARE, I worked a lot with communities surrounding oil producing areas, and saw firsthand how the failure to address frustrations around resource management was part of a wider picture of division and tensions at the community levels that were being ignored.

Once the history and nature of the tensions between communities are understood, different activities should follow to help bridge the divide and heal wounds. These include inter-communal dialogues, trust- and relationship-building activities, investment in joint enterprises that bring communities together, trauma healing and counseling, and joint economic opportunities. Initiatives like these offer a great space for reconciliation and should not be forgotten.

2. Engage and include women’s groups

Without women over half the population are left out of any settlement, weakening it from the beginning. But engaging women in the peace-building and reconciliation process can lay strong foundations for peace.

Strong cultural values, especially in the countryside, marginalise women from participation in any level of political activity or decision-making. At the same time women hold an important place in South Sudanese society. Women are perceived as neutral and seen as natural reconciliators with influence over sons and brothers directly involved in the fighting. A significant number of women in South Sudan participated in drafting the Comprehensive Peace Agreement in 2005. They are an important capacity for peace as well as key actors who should have an equal say in the political decisions of the country. Without women there can be no peace.

Experience from the last decades of war has shown that youth are among the primary victims of conflict because they are a target for manipulation by leaders and recruitment into armed groups, and many of them miss out on school, potentially destroying their future, because the conflict overwhelms the education system.

Former child soldiers and other conflict-affected youth need to be given a voice in the peace discussion, as well as the support they need to overcome the trauma of their experiences. Supporting debates between youth, dialogue and exchange visits could all help make their voices more powerful and ensure they contribute to national reconciliation. Ignoring youth instead could lay the seeds for future tension as once again the real anger and frustrations of the country are ignored.

4. Give a role to faith-based organisations

The moral and spiritual values of faith-based organisations can be a gateway to building peace and reconciliation by appealing to people on either side of the political divide by pointing to their common religious beliefs and faith. Previous reconciliation committees involving church leaders have failed because they have not been listened to by the political leadership. This time faith groups should play a central role in convening civil society, and stewarding national healing.

As long as the civilian population remains armed, it will always remain difficult to bring sustained peace to South Sudan. The continued wide availability of arms presents an ever-present threat to the local population, encouraging cattle raiding, increasing the likelihood of inter-ethnic fighting, and affecting food security by preventing people from working on their farms. Conducting comprehensive and simultaneous disarmament in South Sudan is therefore vital. To achieve this we need the neighbouring countries and the wider region to support disarmament with a crackdown on illegal arms smuggling to prevent the spread of weapons from other conflict-affected states in the region.

6. Capacity-building for the police

This time around, a stronger focus needs to be placed on building the capacity of the police to be able to respond to and prevent violence as well as relate to the concerns of the people, both men and women. For this to happen we need to build the trust and legitimacy of the police. In turn this will encourage people to put down their weapons if they believe they can be assured of their safety.

Simon Chol Mialith is Peace Building and Conflict Mitigation Coordinator for CARE South Sudan. Simon has written about his experience ‘From child soldier to peace builder’ in a blog for the global CARE website.

More in this category: « On International Women's Day, is gender equality India's next competitive advantage? Transforming our world by 2030: Why must we care? What must we do? »