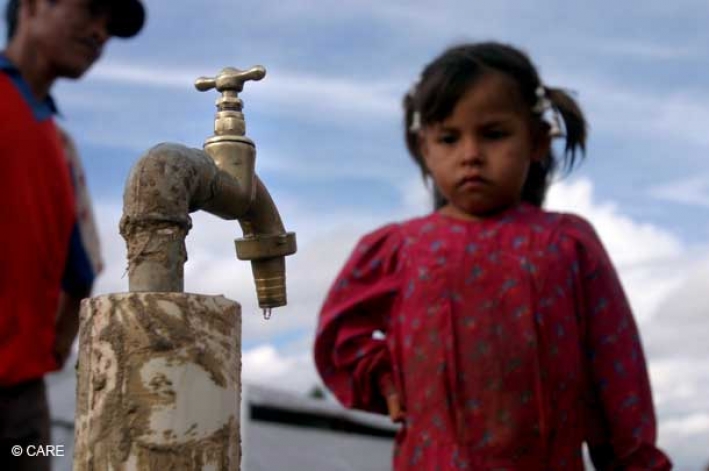 You may think the title of this blog is a terrible pun but, nonetheless, it is time we started to care more about about care work, writes Tom Aston, CARE's Governance Advisor who's currently based in Bolivia.

Recently, a mountain of work has been produced by the UN, IDS, Oxfam and Action Aid on the importance of valuing unpaid care work – cooking, cleaning, caring for children, sick and elderly family members, etc. This work means that many women (and some men) are ‘time poor’.

• They have less time for paid work: half of women in Latin America haven’t entered the labour force due to their domestic responsibilities (ECLAC, 2007)

• They have less time for education: in Bolivia, girls under 14 spent more than 20 hours a week carrying wood, fetching water, washing and ironing clothes (ECLAC, 2007)

As we all benefit from unpaid care work, it ought to be a shared responsibility by all (state, the private sector and individual households). However, because this work is carried out in the private sphere, it is invisible, undervalued and unregulated. States around the world typically invest little in the provision of day care services or elderly care. Private sector actors invest little in crèches, which would allow women and girls to go to school or enter the paid labour force. This means that the burden of care is left to individual households.

Given the enormous levels of inequality in many developing countries, a substantial number of middle and upper income households have enough money that they are able to employ a domestic worker to carry this burden. Money buys them time so that they can go to work to make more money. In this way, paid domestic workers subsidise middle and upper income households, lower the cost that employers must sustain to maintain employees and their families, and reduce public sector spending in providing care services that might otherwise be a state responsibility.

As I pointed out in a previous blog, this subsidy comes at a serious personal cost. Domestic workers have exceptionally low salaries1 , they often have no established working hours, and few receive paid annual leave or basic social security. You might be thinking “This doesn’t apply to me,” but there are around 138,000 domestic workers in the UK (ILO, 2013), and recent stories in New York and Hong Kong show that abuse behind closed doors can happen anywhere.

A fair deal for domestic workers

New legislation through ILO Convention 189 is designed to get states to commit to minimum standards for domestic workers and, as a rights-based organisation, CARE stands firmly behind this agenda. Yet, only 11 countries have ratified the convention to date, and the United Kingdom is not one of them.

Since 16 June 2011, when the convention was signed, CARE has been working with domestic workers organisations in the Andes to ratify the convention. Both Bolivia and Ecuador have now ratified, and in Bolivia a tri-partite working group (government, FENATRAHOB2 and the Housewives´ League) has been established to enact commitments in the convention. The working group currently has three priorities: a framework for written contracts, a published pay scale and social security provisions. So far, it has committed to publish the contract framework.

There are more than 137,000 domestic workers in Bolivia. Three quarters haven’t finished primary school and Bolivian domestic workers have the lowest average salaries in the region, around $134 per month (Encuesta de Hogares, 2011).

I employ one of these workers; her name is Doña Charo. Her story is pretty common. She dropped out of primary school because she had to work shifts in a factory to help her mother make ends meet after her father was killed. Her night shifts meant that she was never able to return to school and thus allow her to get a decent education and earn a good salary.

My housemate and I pay her $US15 per day, around double the legal minimum salary, but she has no written contract, so she has no real job security. When I suggested that she have one, she told me “I don’t need one, I’m fine,” and when I wanted to talk to her about raising her salary, she told me “Whatever works for you.”

This shows clearly how domestic workers ‘naturalise’ job insecurity and how unequal pay negotiation is for these workers. Nine out of 10 domestic workers in the country have no written contract, and partly as a result, 8 out of 10 earn less than the legal minimum salary.

A contract framework and a pay scale can go some way to change this, but neither the Labour Ministry nor the Ombudsmen has the capacity to carry out oversight to make sure that workers have contracts and receive fair pay. This means that FENATRAHOB and other non-governmental organisations such as CARE need to step in to support these oversight efforts and make sure that commitments become reality.

More in this category: « The madness of climate change inaction The Philippines after Typhoon Haiyan: Exposing ‘middle-income’ country realities »