Can more gender equality boost the competitiveness of the PNG coffee industry? 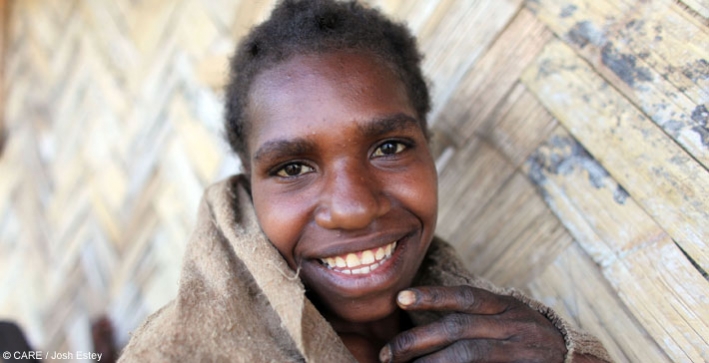 A young woman in the PNG Highlands (photographed in 2011)

When I arrived in Yasubi, a small and industrious village in the Okapa district of the Papua New Guinea highlands, I could see that most of the services we normally take for granted – like electricity, running water, accessible roads – were absent. Most of the hard-working, coffee-producing families live in traditional round huts, with smoke from a wood fire rising through the grass roof so that, from outside, the structure looks like some huge vegetable just pulled out of a pot of hot water.

As a striking contrast, on flat ground a few hundred metres away from the houses, a large metal and concrete structure stands empty: it will shelter a coffee processing facility that a local group of farmers (Roots Number One) managed to set up thanks to a loan obtained from an International coffee trader, Monpi.[1]

Outside, men and women are grouped in different places, each busy in activities mostly dictated by the cultural gender division of labour. While I watched the scene, I started to mentally track the life of a coffee grain from the tree until it leaves the community, based on the information obtained during my conversations there and in Goroka (the main town in the highlands region).

Much of the preparation work like weeding, pruning, fertilising is done by men – but with substantial support from women. Most of the harvesting, pulping, wet processing and drying is done by women and, unfortunately, quite often by children.

Even though the coffee grains are mainly handled by female hands and their final quality largely depends upon women’s work, men would sell the end product and decide how to spend the money. Women normally manage much smaller amounts of cash from their hard work in food gardens and from the sale of vegetables at the local market.

This form of household financial management, where women have very limited decision-making power but nevertheless are responsible for production and domestic activities, often generates tensions between wives and husbands – and in a society with huge and ingrained problems of gender inequality and gender-based violence,[2] these conflicts will often end up in violence against women.

Add to this the fact that most of the technical training and extension services that smallholder farmers receive are delivered only to men, by male extension officers, and the consequence is that women, according to some of the interviews I carried out during my visit, often become quite unwilling to spend time on coffee production. Although some women are still forced to work coffee despite the lack of incentives, they prefer to focus on less profitable activities where they have better control of the production process and resulting income. Thus, many coffee cherries end up rotting on the trees.

According to CARE PNG’s analysis conducted for the Coffee Industry Support Programme (CISP) project design, gender inequality is one of the reasons why the coffee industry in PNG does not take off, and most of the smallholder producers continue to live in poverty despite the fact that conditions exist to produce one the highest quality coffees in the world; that coffee is the main cash crop involving around one third of the population; and that millions of dollars in development projects are pumped each year into the local coffee industry.

Thanks to the support of the Australian Government, CARE started the Coffee Industry Support Programme in 2013, whose design aims to correct the gender bias existing in coffee production and to increase productivity and quality. The basic assumptions are that: 1) if women have better access to extension services and training, 2) if the workload is shared in a more equitable way in the family, and 3) if financial management becomes a joint responsibility, then smallholder families will: 1) reduce internal conflicts and gender-based violence, 2) they will increase their income, and 3) the quality and quantity of coffee production will improve as well (because families should work together more effectively as men will value the role their wives play, and women will apply learned technical information to the key coffee activities that impact quality).

This set of assumptions and expected outcomes is pretty bold, especially in a country where there is a variety of other serious constraints along the coffee value chain including very poor road infrastructure, limited coverage of extension services, low level of education, lack of basic services in the communities, and poor governance, which of course is the underlying cause of all the above.[3]

Investing in women in the coffee industry

Despite the additional structural constraints in the industry, CARE managed to convince the main coffee traders in PNG, the coffee government agency (the CIC) and important civil society organisations, including the umbrella organization PNG Women in Coffee, that this approach is one worth investing in. The result is that most of the existing extension services in the country now have become accessible to women and the first two female extension officers are working in a local cooperative (HOAC).

This is a significant advance in a country where gender inequality is ingrained, and where there is a high level of sexual violence against women. As Miriam (pictured right), one of the female extension officers, a young, skilled college graduate, explained, when she goes to work in remote rural areas she needs to be permanently escorted by a male family member because of concerns for her safety, and especially because of gender-based violence and in particular the risk of rape. Despite this fact, and despite the fact that she has other job opportunities in the city nearby, she expressed her enthusiasm to help women in the rural areas together with her colleague Ronah and explained that they have quickly gained respect from male producers as well.

The coffee traders’ extension officers are now delivering the so called Family Business Management Trainings (FBMTs) to coffee smallholders’ households, besides the normal technical support. The FBMT is at the core of CARE PNG’s gender strategy as it is a workshop that combines elements of financial management, business management and gender equality inside the households, involving both wife and husband.

Some of the men who I talked to recognised that the way they were behaving with their wives before the workshop was – in their own words – “not good”. Following the training they started to help with domestic tasks like cooking and even washing women’s clothes, normally considered as a taboo activity for men. Some of them mentioned that because of sharing the financial responsibility, they were managing to save more money and spend more wisely.

According to one of the participants, before the training he made the decisions on how to spend money and his wife wouldn’t help him prune the coffee garden, pretending that she was sick. After they started to manage the budget together and he started helping in domestic tasks, she would be no longer “sick” when the time to prune arrived and they would do it together. Other men candidly mentioned that they drank and gambled less after the training.

Only a first step

Of course, it is always difficult to distinguish facts from half-truths told to please the supporting NGO – and these training sessions are only a first step in addressing the deep-rooted social, cultural and historical factors that make gender-based violence such a prevalent feature of PNG society. Nevertheless, the fact that men and women who didn’t participate in the training wanted to have it, is a positive indicator in itself.

The project is relatively recent and we still are in the process of collecting evidence; detailed quantitative data around overall outreach and productivity gains will be available next year. Nevertheless it is a great example of how CARE combines the essential bottom-up changes involving the whole household, with a top-down strategy in partnership with the private sector to bring about industry-wide changes and women’s economic empowerment.

[1] Monpi Coffee Exports Ltd and with the help of community extension support through SMS-PNG.
[2] See, for example, figures cited by the PNG Health Minister Michael Malabag in 2013, reported on the PNG Facts website; a 2013 report by ChildFund Australia, New ChildFund report reveals shocking levels of violence against women and children in Papua New Guinea; and a 2013 UN survey which found in representative study sites in PNG that one in five women’s first experience of sex is rape.
[3] PNG’s Human Development Index (HDI) continues to fall – it was positioned 157 out of 187 countries in 2014 by the UNDP. Corruption remains a huge development hurdle for PNG, and in 2014 PNG was ranked 145 out of 174 by Transparency International.