Home // Development Blog // The UK government is at risk of failing our first 100 day tests on equality, climate and development

The UK government is at risk of failing our first 100 day tests on equality, climate and development 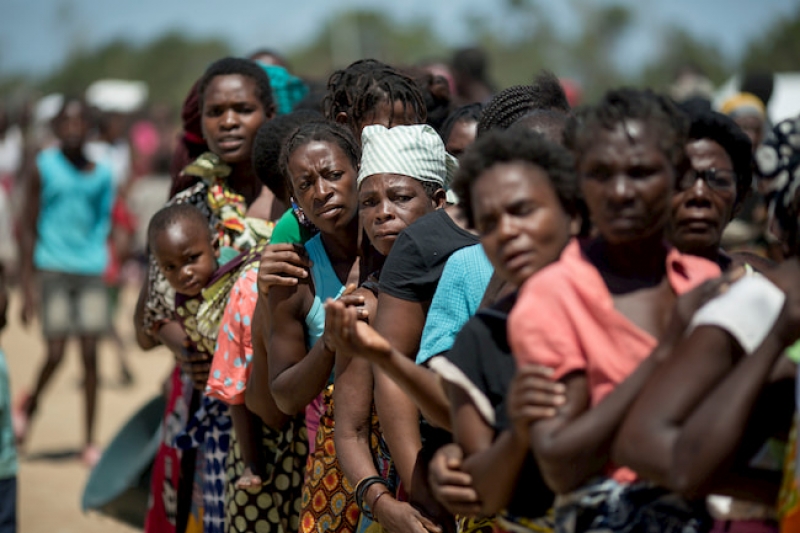 Women on the frontlines of the climate emergency queue for supplies following Cyclone Idai in Mozambique. Josh Estey 2019.

When this new government was elected, CARE International UK and our supporters called for four actions in their first 100 days that would demonstrate their commitment to gender equality, tackling climate change and spearheading international development.

Now, over two-thirds of the way through we are at risk of missing these critical targets. Targets that would drive the direction of travel that we so desperately need on areas like climate change. Let me outline what we see and how urgent action might bring about improvements.

On December 13th we set out the following asks:

So how has the government faired by day 67 and counting?

On a gender equal cabinet, the government has some way to go. The reshuffle last week saw seven of the 25 senior Cabinet roles going to women – less than a third. Overall, 36 of 117 ministerial and government roles went to women, again less than a third. It is far from the gender equal Cabinets championed by governments around the world that we aspire to. Globally, SDG 5 has a target to Ensure women’s full and effective participation and equal opportunities for leadership at all levels of decision-making in political, economic and public life. The government has stated its intention to invest in new talent, but we do not believe this Cabinet meets an appropriate ambition for gender equality.

On Climate Change the government has had a mixed start. The government made critical commitments to net Zero by 2050 earlier last year with announcements to end the sale of petrol and diesel cars by 2035. However, we are concerned that the government is well off its target to meet carbon reductions. In particular, the need to cut at least half emissions by 2030.

The removal of COP26 President and former UK Climate and Energy Minister, Claire Perry-O’Neill, has rocked preparations for the critical global summit to be hosted in Glasgow in November. This role has been given to incoming Secretary of State at BEIS, Alok Sharma, a former Secretary of State for International Development. In that role, he has seen first hand the impact climate change is having on the poorest and hardest hit communities around the world including those where CARE works. We urge Secretary of State Alok Sharma to prioritise making progress through ambition-building diplomacy to ensure that the goals of COP26 can be achieved.

The government has yet to appoint a Gender Champion for COP26. From our work on the frontline of the Climate Emergency CARE sees the disproportionate impact of climate change on the most marginalised and exposed, particularly women and girls. We see the critical role women leaders and organisers play in creating solutions and believe a Gender Champion at COP26 is critical to harness these solutions. This is why the focus of our event on International Women’s Day this year (#March4Women) recognises the gender impact of climate change and calls for urgent action to ensure carbon reductions are sufficient to meet the commitment to prevent temperature rise beyond 1.5 degrees.

On the independence of the Department for International Development we were pleased to see the appointment of a Secretary of State for DFID reporting to the Cabinet and to note that Anne-Marie Trevelyan becomes one of seven women taking senior ministerial roles. There had been reports that DFID was to be subsumed within the Foreign Commonwealth Office, a suggestion that we challenged, along with individuals such as former ministers William Hague and Andrew Mitchell, experts on defence and foreign policy and the former Archbishop of Canterbury Rowan Williams.

So while we were pleased to see that DFID remains an independent department, we are concerned that all junior ministers within DFID have a dual role with the FCO. With a combined junior ministerial team it remains to be seen how management will retain the critical quality and independence of international aid that has made the UK the global aid superpower of the last 20 years.

With the 100 day mark rapidly approaching we urge the government to pursue the following actions:

And for those that want to join CARE for our call to action on gender and climate change, please join us on Sunday 8thMarch at the WOW festival and then at #March4Women to follow in the footsteps of the suffragettes and call for government action for women affected by climate change and leading responses to the crises around the world. For more information go to https://www.careinternational.org.uk/march4women

I became Chair of the Board of Trustees of CARE International UK on 1 January 2019, after spending 5 years on the board. I am inspired every day by CARE’s commitment to making a lasting difference to those who need it most, particularly women affected by humanitarian crisis, whether they be caused through natural disasters or conflict. I’ve been actively involved in international aid for almost 20 years in a number of non-executive roles.

I lived and worked in Mongolia for three years establishing the first professional services firm in the country, during which time I worked with government and multi-national agencies to identify solutions to development issues.

Professionally I specialise in all aspects of governance, risk and assurance, with a particular focus on the impact of culture and behaviours. Until recently I was the Group Head of Audit, Risk and Control at Centrica plc. Prior to this I spent almost 20 years with PwC, latterly as a Partner.

More in this category: « Transforming the future of work for gender equality: What’s happening in Asia? What we’ve learned about adaptive management from our Somalia education programming »