Home // Development Blog // Engaging men and boys in Rwanda: why we need to view men not just as perpetrators, but as partners in ending sexual violence

Engaging men and boys in Rwanda: why we need to view men not just as perpetrators, but as partners in ending sexual violence 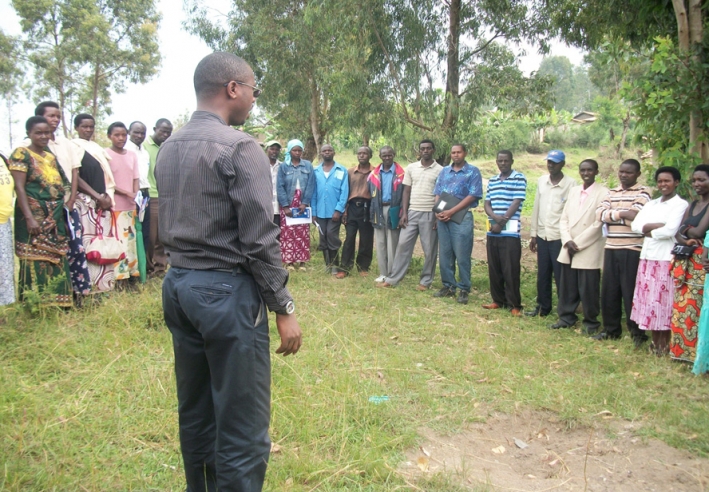 Couples participating in a 'journeys of transformation' gender workshop in Rwanda

CARE called on the Global Summit to End Sexual Violence in Conflict to tackle the root causes by supporting and scaling up innovative programmes to engage men and boys on gender equality and gender-based violence prevention. At a CARE panel event at the Summit, Edouard Munyamaliza described how CARE partner organisation RWAMREC has been doing this in Rwanda since 2006. So what has RWAMREC achieved, and what can we learn from it?

As one of the nine positive-minded men who founded the Rwanda Men’s Resource Center (RWAMREC) in 2006, I believe that while women and children are the main (but not the only) victims of sexual violence, for real change to happen men should be seen not only as perpetrators, but also as change agents. And since RWAMREC was set up, we’ve shown what engaging men and boys in tackling gender-based violence can achieve.

Why we set up RWAMREC

The first reason: An endemic prevalence of men’s violence against women and children stemming from our recent history of genocide, rigid traditional norms, religious beliefs, and negative modeling of power in the education system. We needed a way to help men to themselves become non-violent, and then reach out to other men and influence them for positive change.

The third reason: Masculine behaviours and practices were affecting negatively the lives and wellbeing of men. For example, men would be involved in risky behaviours, and unless they were in a critical condition, some men would not seek health services, or participate in the health of their family members, for fear of being seen as engaging in women’s activities.

Therefore, there was a huge need to promote positive and non-violent forms of masculinity in Rwanda so that men can be positive to themselves and their family members, their spouses and neighbours. Negative masculinities can be seen as violence directed against oneself, and it is obvious that nobody can be positive to others before being positive to themself. Promoting positive forms of masculinities can also help to expose some hidden (unreported due to cultural norms) gender-based violence (GBV) against men, and thus design appropriate GBV response and elimination strategies.

Experience has shown that punishment has made a positive contribution in preventing sexual and gender-based violence (SGBV), but that punishment alone will not end SGBV. Instead of dealing constantly with the consequences of offences already committed, an effective strategy to end SGBV would involve engaging men to influence or prevent their peers from committing the offence. Thus, RWAMREC promotes the idea of ‘bringing all men on board’ in the fight against SGBV. Our goal is to change the mindset of men and women, and to turn men into role models so that they work hand in hand with women to break the cycle of sexual and gender-based violence in Rwanda.

As well as empowering men to reach out to other men to promote positive masculine behaviours, we need to enhance men’s understanding of and support to women’s empowerment initiatives, and build partnerships with women to promote gender equitable norms, behaviours and practices. RWAMREC’s work involves building community movements that can help to change the collective perception of gender relations, and ensuring synergies with women’s organisations in advocacy work at national level.

RWAMREC engages with the central government and other development partners to ensure gender-transformative formulation of policies and strategies including the policy on prevention of SGBV, the revision of the Family Policy and Law, the national strategy on HIV/AIDS and SGBV responses, among others. RWAMREC has also carried out nationwide research on SGBV for advocacy and programming purposes, including the 2010 research on masculinities and gender-based violence in Rwanda, the 2012 policy analysis on engaging men strategies with the health sector, the 2013 gender-based violence baseline study, and the 2013 gender assessment in the national strategic plan on HIV/AIDS response in conjunction with the Rwanda Bio-Medical Centre and UNAIDS in Rwanda.

RWAMREC has worked to strengthen the capacity of sister organisations and government institutions to mainstream and implement gender responsive programs that use MenEngage approaches, and appropriate tools are availed for this purpose. Highlights include:

The ‘journeys of transformation’ model

It is a public perception in Rwanda that a woman should not earn more than her husband, and as a consequence, GBV on women increases as their economic capacities increase. A programme of Voluntary Savings and Loans (VSL) schemes for economically vulnerable women was being blocked, or not supported, by men. RWAMREC in partnership with CARE and Promundo introduced the ‘journeys of transformation’ model to engage men to become positive and supportive of women participating in the VSL economic empowerment programme.

The model consists of a 17-week programme of empowerment workshops that bring together couples identified from the VSL. So far, 2,310 couples have been empowered so that they can reach out to the other members of their VSLs, and put in place men’s reflection and community mobilisation groups. These groups are continually empowered in order to have adequate skills they can share with the rest of the community members.

The national youth council and the national women’s council – both of which have structures from the national to the village levels – were involved in order to increase ownership and sustainability.

This project has yielded positive results beyond successful and sustainable VSLs: an end to GBV amongst the households trained; greatly improved marital (including sexual) relationships; shared power in taking family decisions; progressive change to the gender division of labour in the family setting; and increased capacity to reach out to other community members for individual and collective positive change to end SGBV.

Together, these initiatives show the real gains that can be made in ending sexual and gender-based violence by taking a comprehensive and wide-ranging approach that fully engages men and boys.

Edouard Munyamaliza is Executive Secretary of the Rwanda Men's Resource Centre (RWAMREC), a CARE partner organisation that has been promoting positive forms of masculinities in Rwanda and engaging men in ending gender-based violence since 2006. He is also a commissioner in the National Unity and Reconciliation Committee promoting peacebuilding in Rwanda, and is chair of the Rwanda Civil Society Platform.

More in this category: « We need a new deal for refugees and refugee-hosting nations and we need it now Reaching the Summit – a celebration, and a massive to do list – Part 1 »