Home // Development Blog // Reaching the Summit – a celebration, and a massive to do list – Part 1

Reaching the Summit – a celebration, and a massive to do list – Part 1 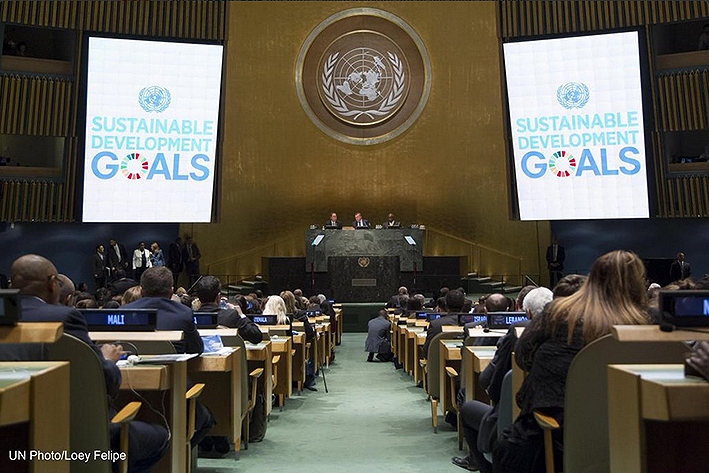 So we did it. On Friday the world gathered in New York, flags were raised for 193 countries including Palestine and the Vatican for the first time, and to universal acclamation the new Sustainable Development Goals were gavelled into existence. What had taken three years of hard negotiation, impassioned argument and long technical nit-picking were suddenly a reality.

Sitting opposite the building in CARE’s office, taking photos and being stared at by snipers, this is how I reported the moment.

#globalgoals formally adopted by acclamation. The whole world with one common agenda. That's an achievement.

But what were the other highlights of the SDG summit and the launch of the 2030 agenda?

There was the Light The Way worldwide moment on the eve of the SDGs, that spanned New Zealand to Nairobi to New York.

Although turnout was quite small, there were genuine moments of feeling when social rights activists from New York took the stage and made the universal goals feel incredibly local and relevant to their #blacklivesmatter and minimum wage campaigns.

This showed the potential for how this new universal agenda will break down the old North vs South dichotomy to empower rights activists to challenge power holders in their local communities everywhere.

Earlier that day the #FemForum had gathered leading feminists to reaffirm the women’s rights and gender dimensions of the new goals. It was both a celebration and also a rallying call for further action.

@AWID Child 'Marriage' is certified abuse of girls on a mass scale-Est 15m a yr in Africa @End2ChildAbuse #FemForum pic.twitter.com/atDZ62ILRU

@tomsessionsreported from the B Team event:

It's time for business to stand up to corruption and improve transparency. @Mo_IbrahimFdn #BTeamLive @richardbranson pic.twitter.com/bPbkg4rAo7

Then came the start of the summit proper on Friday. There was this ‘We The People’ video:

We were reminded of where we were 15 years ago:

Malalah stood with 193 youth to make a powerful call for change and a focus on education as the change:

And of course, in another remarkable moment, Pope Francis called for action on climate change, equating harm to the environment as harm to humanity. Too much talking? Then perhaps you’ll prefer Shakira channelling her inner John Lennon.

For CARE, Friday was all about three key side events we’d spent the last two months preparing for. Both different but emphasising two of our strategic priority areas, they were part of the 200 plus side events that turn the UN General Assembly and this year’s SDG summit into the Edinburgh Festival of international development.

First came a signing and formal handing over of our Savings Charter to the UNCDF supporting the continued campaign for financial inclusion for the last 2 billion without formal access to bank accounts.

Honored to join other organizations and be an implementer of the Linking for Change Charter http://t.co/jp4F0rRlFO pic.twitter.com/bxlde7d7UZ

Next came the Transforming Economies: Empowering Women event, hosted by Justine Greening of DFID and UN Women and moderated by Nick Kristof.

CARE’s Michelle Nunn announced our aim of massively scaling up our economic empowerment work and influencing others to do the same and CARE partner JITA’s CEO Saif Rashid planned to double their rural sales force of women in Bangladesh to 6,000 workers in the next year.

Saif Rashid: we've doubled income for the women that work with us. Now we want to double that again. #EmpowerWomen pic.twitter.com/4FOAklLpPF

Ten other CEOs and governments made powerful commitments to take the SDGs forward as a movement encompassing business, civil society and states. As Justine Greening put it, if we’re not winning the battle on gender equality we’re losing. There is no stopping. For more on the event check out @christinesvarer who was in the second row and caught all the action.

Later, on a rooftop terrace underneath the lights of the Empire State building.

Citizen 2.0 explored how we should be using data from ordinary people to truly judge the progress of the next 15 years, rather than relying on official data.

New tech, data revolution & spread of mobiles has made mass participation monitoring of #SDGs a reality within... http://t.co/yimDFgHc5i

With so many thinking about this issue, we brought together donors, civil society and tech companies to work out how to move forward. It also brought a useful counter to the complaint that the conversation on the SDGs was missing a discussion on power.

By bringing in citizen voice we have the chance to shame, provoke and incentivise power-holders into action, while also reinforcing the mobilisation of grassroots activism. Knowledge is after all power.

Not enough power in SDGs?http://t.co/EaglHowKcH Lets add it with #peoplesdata Bringing tech, social acctblty and data together #citizen2.0

More in this category: « Engaging men and boys in Rwanda: why we need to view men not just as perpetrators, but as partners in ending sexual violence Shelter in emergencies: What we can learn from self-recovery in Vanuatu? »