Home // Development Blog // Frontier healthcare in a frontier market: Why social investment is good for business, too

Frontier healthcare in a frontier market: Why social investment is good for business, too 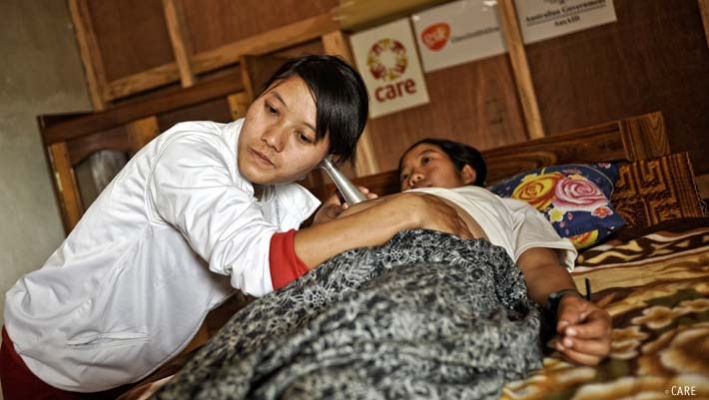 An auxiliary midwife in Lashio, Myanmar

For some of the world’s frontier markets, such as in Myanmar (formerly Burma), the risks of accelerated growth are that many of the country’s poorest get left behind. But as CARE’s experience creating ‘frontier healthcare’ in partnership with GSK shows, businesses that target social benefits above and beyond their immediate commercial interests are not just making a social investment – it’s good for future business, too.

Last week, I travelled to Myanmar to see for myself how CARE has been collaborating with one of the world’s largest pharmaceutical companies, GSK (GlaxoSmithKline), on an initiative which involves GSK investing back 20% of their consumer healthcare profits from the Asia Pacific region into improving community healthcare services for some of the region’s most vulnerable citizens.

To paint the briefest of pictures first, the context within Myanmar is unique. You’d be hard pushed to find a more economically vibrant, politically charged and socially dynamic country in Asia than this one. Surrounded by the region’s heavyweight nations, Myanmar is the second largest country in South-east Asia, home to 50 million citizens, and a hybrid mix of Buddhist, Muslim and Christian followers.

Since sanctions were lifted in 2010, many large corporations have been ready to open up businesses in Myanmar and reach out to Burmese consumers, suppliers and local producers. Year-on-year growth for the country is spiking upwards, foreign direct investment is strong, hordes of tourists are queuing up to visit – but will the country’s predicted growth leave the majority of its citizens behind? Myanmar already has one of the highest levels of inequality in the world, and this could easily widen still more in the future.

With limited public services reaching the poorest and most isolated communities, and with ongoing internal conflict and displacements happening in the very same villages, CARE believes engagement with companies such as GSK is one of the best ways to address, over the longer term and at scale, the raft of social access barriers which hold people back from living more empowered day-to-day lives.

The intervention funded by GSK is targeting expectant mothers and child health. One of the most frequent causes of maternal mortality and neo-natal death is a lack of on-hand midwives and, more generally, poor standards of medical services. With GSK’s investment alongside CARE, these gaps are being addressed via the training and recruitment of a wave of new Auxiliary Midwives (AMWs) working as volunteers alongside government-paid midwives.

The AMWs are selected with input from Village Development Committees (VDCs) and after their training are able to carry out most of the duties that a normal midwife would – before, during and after the birth.

Additionally, in each community, our programme has established a referral fund, managed by the VDC and used to financially support the healthcare needs of expectant mothers.

Empowering the most marginalised

We met several AMWs, all under 30 years old and each explaining how the new role they play in their communities gives them (as young women predominantly still living with their parents) a higher degree of respect and recognition within communities which are traditionally led by the male members, and by elders. Nang Myat Myat Hlwe (aged 21), one of the AMWs we met, told us: “Before I was trained as an AMW I was not seen to have much to offer the community because I am young, but now people listen to me and accept me as having something to offer.”

All of these impacts have obvious benefits for local Burmese communities, but what about GSK?

What struck us from visiting the Lashio programme was how GSK’s investment has not directly targeted their core business (selling pharmaceutical products) but instead focused on improving ‘common goods’ at the local level – funding training courses and new medical clinics, establishing the referral funds, and even looking at how water and sanitation facilities at the local level can be improved.

Whilst GSK’s return on investment seems on the surface of things to be less obvious, it is clear that – in a competitive market such as the pharmaceutical industry – the more that citizens in places such as Lashio have an improved understanding about nutrition and healthcare issues, then the more informed a market will develop in Myanmar for the types of products GSK manufactures.

There are gains to be had in the long term for companies prepared to financially invest their businesses with social purpose outcomes, and also do this in collaboration with civil society and NGO partners. GSK’s ‘20% reinvestment’ initiative has set out to do just this, whilst CARE’s commitment is to ensure the resulting programme is delivered in a way that is both socially responsible and in demand at the local level in the first place.

Government, NGOs and companies working together

What our colleagues in Myanmar were clear on next was how these outputs must link up with the government health systems, and in doing so catalyse engagement between public, private and NGO stakeholders.

Returning from Lashio, we met with GSK at their head office in Yangon, and the perspectives shared by their General Manager there, Maung Maung Naing, echoed ours. “Aligning this investment to the government’s National Plans for public health services is key,” Maung Maung explained. It’s hoped that these early interventions, created together, could start to have a ripple effect in influencing changes in the government’s investment in pre- and post-natal healthcare services in Myanmar – for example, through more funding and support for the emerging AMW network.

The opportunity to engage more efficiently and effectively across all sectors may yet unlock the right type of answers, and avoid the risk of seeing yet more ‘exclusive’ and unequal growth taking place in a country which promises so much for its future generations.

Read more about the partnership between CARE and GSK on careinternational.org.uk

More in this category: « Three key reasons for bringing the private sector into peacebuilding efforts CARE event on Resilient Markets, 8 December: Join us to discuss how to strengthen women’s economic empowerment in fragile settings »