Maternal health care in Bihar: One born every two seconds 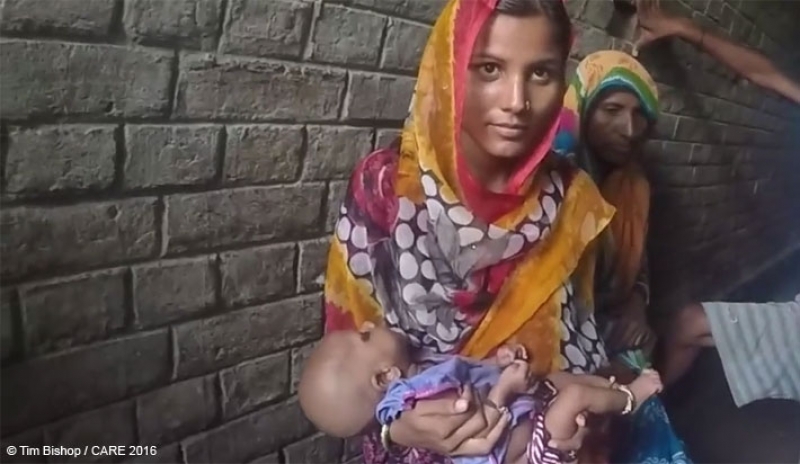 Ruby and baby Ruksiba were helped by CARE-trained staff with guidance on breastfeeding, nutrition and vaccinations

Her first four children each died of asphyxiation during delivery. The 30-year-old’s fifth – a baby girl – was born safely at home, and against all odds. When the same expectant mother entered Bihar’s district hospital to deliver her sixth baby, she was hoping for a boy. She entered the hospital carrying the hopes and dreams of the many family members waiting outside for the news and, as I bore witness to, her prayers were answered.

Through CARE International’s influence within the health sector of Bihar (one of India’s most populated states with 110 million citizens) this mother had been encouraged to deliver her sixth baby in hospital, rather than at home. A decision which instantly improved her and her baby’s chance of survival.

I was visiting the hospital with the local CARE team at the time, and I saw how CARE is helping transform the state’s healthcare system, and improve the quality of the services available.

Bihar is home to millions of people living on or below the poverty line – estimates vary depending on the criteria used – however, in rural parts, it can be up to 60%. Maternal and child mortality rates are higher than the national average – equating to approximately 2 mothers out of 1,000 dying in childbirth, and 4 child deaths out of every 100 born.

The solution: systems, facilities, and training and support

Since 2010, various government and international aid investments in Bihar have accelerated change in vital areas of healthcare. This includes furnishing Community Health Centres (which are facilities containing six beds) as well as smaller, local clinics with more up-to-date equipment, and providing healthcare workers with more structured training. This enables workers to offer up many of the skills they need in order to be able to have a real influence on lowering the rates of maternal and child mortality.

As CARE’s Dr Hemant Shah explained to me from his office in Patna, the state capital, it is by focusing on three complementary areas of the sector – the systems, the facilities, and the out-reach support – that CARE is working with the Government and with partner organisations to help bring about change in Bihar.

If more citizens, previously cut off from healthcare services, can be reached, and if the quality of healthcare facilities is improved, alongside changes being made ‘vertically’ in how the system itself functions, Dr Hemant is convinced that more positive advancements can be made in Bihar in the years to come.

When the work started in 2011, a high percentage of premature babies were not surviving at birth. Most of the state of Bihar is home to subsistence, agriculture based communities and, all too often, mothers from these often marginalised rural communities experience premature deliveries at home due to stress. Before CARE’s programme was launched, they simply had very limited support or erratic services on which to rely.

Through a combination of CARE’s engagement at a grassroots level, as well as through an incentive scheme offered by the government to encourage mothers to deliver at Community Health Clinics (each receives USD$23 per baby delivered) where CARE has trained front line workers, these statistics have quite rapidly started to change.

In some cases, the mortality rate for low birth weight babies during their first 28 days (across the 8 districts in Bihar where the programme is being implemented) has now reduced to between 10-15% where previously in specific areas it had been recorded as high as 55%.

One of the most important frontline workers in CARE’s cadre is the village ASHA (Accredited Social Health Activist), a critical out-reach function that has helped reduce the gap between rural communities and the various healthcare services available to them.

“We instruct those who have no access to hospitals about delivery and child care at home,” says one ASHA we met. “I also tell them about tuberculosis and leprosy and other illnesses. I ask them to come to government hospital either with me or by themselves, because in government hospital they receive free treatment. If the disease is serious, they can get some money for the treatment, too.”

Two other ASHAs who spoke to us, Mamta Devi and Nazma Khatoon, from Rampur and Naraharpur villages, reinforced the importance of the newborn care services they offer in their roles: “We visit every house and advise people to come to hospital for vaccinations,” Mamta explains. Nazma adds: “The first dose of BCG, OPV and Hepatitis injections are given within 24 hours of delivery, and then for other vaccines like measles, we spread awareness in the community and ask mothers to visit the healthcare centres.”

In addition to vaccinations, front line workers also play a key role instructing the families of pregnant women on birth preparedness, sanitation and keeping properly washed and dried clothes for the newborn babies. Nazma stresses how important it is that they also “advise families to have extra money in hand for any emergencies… Because of our efforts, fewer newborn deaths are happening. Even physical defects such as polio have reduced.”

Advice is also made available through a twice weekly “Village Health Nutrition and Sanitation Day” event to which CARE gives operational support. These events bring new mothers together to learn about complementary feeding, to receive vaccinations, and to learn about how to give their babies the healthy start in life they need.

We also heard from the frontline workers not just about the positive effects on new mothers, but also about some of the things they as workers had been empowered to do, following CARE’s intervention and training. And, ultimately, how this has instilled in them a sense of pride and appreciation for the jobs they are carrying out and their own career paths.

“We have started focusing on sterilising medical equipment. Earlier it was not a priority for us,” commented Suganthi, one of the programme’s Auxiliary Nurse Midwives based at Jalalpur Community Health Centre in Chapra. “We are now providing proper care to new born babies. We track the low birth weight of babies in the community where earlier we were not able to do this or to diagnose complicated cases. Following the training, we have started diagnosing complications and referring them to higher centres where appropriate.”

Overcoming complexity with a simple goal in sight

This blog cannot incorporate the myriad of complexities, cultural norms, and underlying causes of poverty which permeate in a country such as India. However, in the face of the many obstacles facing frontline workers and local communities, this work in Bihar highlights some of the significant and positive changes and shifts in norms which are taking place each day.

CARE is playing its role in this complex eco-system, and hopes to remain active for years to come – for the change that women and their families deserve will not happen overnight.

More in this category: « “Reconstruction of Syria cannot be a real estate industry”: Civil society’s challenge to the Brussels Conference on Syria How to measure Value for Money in delivering aid »