“Reconstruction of Syria cannot be a real estate industry”: Civil society’s challenge to the Brussels Conference on Syria 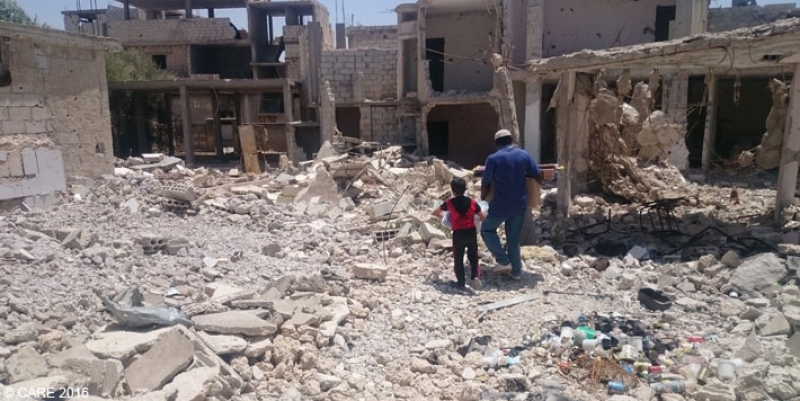 Today, ministers and senior diplomats from around the world meet with the UN, EU and states involved in the Syrian conflict for a high-level Conference (5 April) to identify ways forward on the crisis. This happens as news from Khan Sheikhoun in southern Idlib in Syria suggests that an aerial bombardment using chemical weapons has left over 50 dead, and the situation escalates across multiple besieged areas across the country. At the top of the agenda is the question of ‘reconstruction’ – yet what does ‘reconstruction’ mean in a country still at war?

Speaking to Syrian activist, Tamara Rifai, this weekend, she laid out the challenge clearly and starkly:

“Reconstruction in Syria isn’t a real estate industry. In the absence of a meaningful political settlement or human rights guarantees, it’ll just be another front in the war economy and lead to further rounds of violence.”

As the Syrian crisis enters its 7th year and the political will of other nations to host refugees from the conflict falters, a major concern for humanitarian and human rights groups is that ‘reconstruction’ – with funding and the political process tied to that – becomes a euphemism for pushing displaced Syrians back into Syria, or trapping those stuck there within its borders, whatever the cost, financial or human.

So far, diplomats from the European Union have said they will not fund reconstruction in Syria until a comprehensive political settlement has been agreed. In the Council Conclusions of 16 January 2017, European Foreign Ministers confirmed readiness to support reconstruction in Syria “once a credible political transition is firmly underway”. One central question over what this precisely means relates to whether or not the President of Syria remains in power or not, and whether this is for a transitional period or longer. Contradictory statements on these issues from the US Government have generated further confusion.

Reports have emerged that some donor governments are already reframing their aid funding to the crisis in ways that lay the groundwork for ‘reconstruction’ and returns of refugees in the absence of any clarity on the political process, consensus over what a ‘political transition’ might look like, or hope of peace. For example, one peer agency told us a major donor had reframed funding for ‘support to civil society’ as ‘peace-building’ with a focus on facilitating negotiations with the Government of Syria.

A recent report by a Dutch NGO which specialises in conflict analysis and human rights, PAX, alleges that the UN agencies and others risk becoming complicit in forced displacement of the local population in Homs by investing in reconstruction efforts in the city despite the lack of progress in peace negotiations at the national level, and without adequate guarantees to ensure that people displaced from the city can return or access their property safely. A couple of examples from Homs illustrate the political sensitivities at stake in reconstruction. The PAX report alleges that: “the Christian majority neighborhood of Hamidieh is one of the few where people have been allowed to come back and one of the first to be addressed in UN-supported rehabilitation projects has deepened sectarian resentments among the displaced.” In contrast: “road repaving had begun to reach many parts of the Old City, but for some inexplicable reason the neighborhood of Bab Hood – a strategically-located former opposition stronghold – had been skipped over.”

Analysis from others has highlighted that the space for independent local civil society or INGOs to operate in areas that have recently fallen under the Government of Syria’s control remains either zero or close to zero. Interesting differences have emerged in different areas that have undergone what some call ‘ceasefires’ and ‘reconciliation’, and others have branded the ‘siege, starve and surrender’ strategy. Once areas come under the Government’s control, a structure called the “baladiya” is established – a local municipal authority responsible for the coordination of public service provision, local property registration, local economic regulation and registration, and in some cases forming security committees responsible for coordinating local police, security and military forces.

In Madamiyet Elsham, for example, there are reports that the local council and some of the local civil society networks which provided relief during the siege have been able to continue their work. In contrast, in other areas, anonymous sources have reported that the “local council was almost entirely evacuated from the town, negatively impacting local service provision and governance in the community.” Across the country, powerful figures, linked to factions involved in the conflict, continue to exercise control of the economy. As such, it appears the war economy persists despite nominal local ‘reconciliations’ in places.

CARE is supporting some of its Syrian civil society partners to share their recommendations with officials in Brussels around the Conference. One of their main messages is that, whatever direction the political negotiations take, the space for independent Syrian civil society organisations needs to be opened up. At present, they are under attack, literally saving lives in bunkers underground and going about their work in fear of arrest or targeting from the skies. [1] They highlight that any eventual reconstruction must benefit all Syrians across the whole country, and avoid becoming a financial tool for forced displacement or other political agendas.

Taking the situation of the many millions of people displaced inside Syria and refugees pushed out of the country, another Syrian activist in Brussels shared:

“Who will adjudicate disputes over property or land ownership? Institutions that have credibility will need to be created to oversee this, which is not possible if the current violence continues.”

“At the moment, most women refugees have lost everything. They cannot even afford moving from a tent to rented accommodation in Lebanon. How are they going to afford to buy back property that was taken from them? Reconstruction must be about restitution and reparation, more than bricks and concrete.”

As one of CARE’s partners delivering life-saving aid inside the country told us last week:

“The Syrian people are being bled out slowly and painfully, while the world watches and the international community throws money at the problem rather than putting real pressure on those powers dropping bombs.”

Our hope is that the Brussels Conference identifies concrete steps to reverse this situation. In the absence of military intervention aimed at preventing attacks on civilians, the one point of leverage that European and other donors have is financial. If the Brussels Conference emphasises how protection of civilians and human rights guarantees must underpin any future funding for reconstruction, then perhaps this is something. With more than 600,000 trapped in at least 13 besieged areas across Syria, any leverage is important. But for the people of Khan Sheikhoun today, it comes too late.

[1] Another concern raised by international NGOs, including CARE, towards the Conference is the containment of Syrians displaced by the violence into so-called ‘safe zones’ inside Syria at the borders with Lebanon, Jordan and Turkey. At one point, Syrian human rights activists had campaigned for external military intervention to help safeguard civilians in parts of the country under aerial bombardment, primarily from the Syrian government and its allies. However, despite much rhetoric from Western officials, no action was taken to end the barrel bombs and other attacks, both targeted and indiscriminate on civilian areas. Now both countries neighbouring Syria and Western states, including the USA, have talked-up the idea of ‘safe zones’ as a means of preventing flows of refugees out of the country. The Syria INGO Forum position on these issues, which CARE endorses, puts it succinctly: “no place (inside Syria) can be considered safe for civilians at this time.” Whether and how this gets raised at the Brussels Conference remains to be seen.

More in this category: « Five ways East Africa is leading the world on financial inclusion through savings groups Maternal health care in Bihar: One born every two seconds »