Brussels Conference on Syria: Three priorities for strengthening a gendered response to the crisis 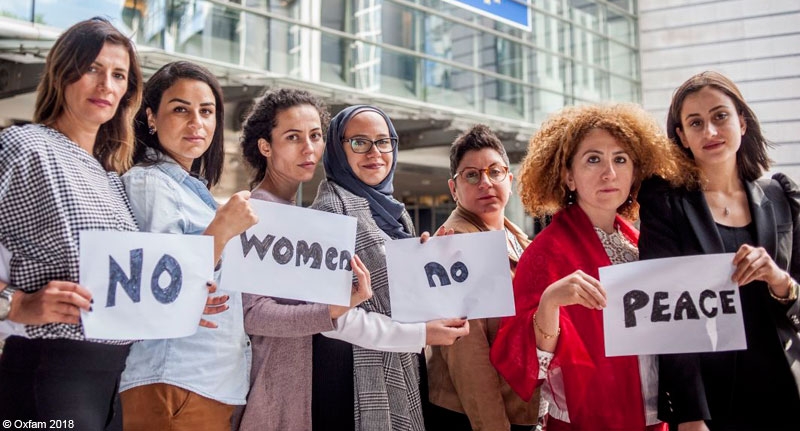 As the Brussels II Conference on Supporting the Future of Syria and the Region gets underway, CARE International is partnering with UN Women, UNFPA, WILPF, Kvinna Til Kvinna, Oxfam and the Swedish government to host an event for Syrian women to share their priorities with ministers and senior officials. This blog outlines three suggestions from CARE to strengthen efforts to address gender and women’s rights in the Syrian crisis response.

Gendered impacts of the Syrian war are multiple and complex. Inside Syria, violations of women’s rights have been used as tactics of warfare by multiple parties to the conflict. Economic deprivation has led to unprecedented levels of child marriage. Siege and starvation tactics and the deliberate targeting of health services have worsened maternal and child mortality. Men and boys have also suffered gendered impacts of the crisis, including sexual violence and other rights violations.

Here are three ways for the international community to engage both at the Brussels Conference and beyond:

A technical challenge that policy makers in Brussels should recognise is that grassroots women’s groups do not fit easily into the classic humanitarian sectoral boxes which frame donor funding. Whilst numerous NGOs ‘talk the talk’ of gender mainstreaming, there are very few genuinely dedicated to bringing a more transformative approach to protect and empower women. So how to support the groups which do?

Speaking recently with staff at Women Now For Development Syria, they were critical of the tendency for international actors to frame Syrian women as victims; preferring to emphasise their dignity and agency. As one of them put it:

“Aid agencies shouldn’t ask us what the gaps in our needs are, but rather what are our skills and capacities and how can we support you on these? We don’t want to be put in the position of saying ‘we need’, we want to be able to say ‘we do’.”

Yet whilst donor commitments made at the London Conference on Syria in 2016 on multi-year funding have started to benefit UN and INGO partners, this is yet to translate into multi-year, flexible support for local groups.

The political space for independent civil society is also increasingly fraught across Syria, especially as control of different areas changes. Arguably groups addressing women’s rights face even greater risks given the sensitive nature of their work, as highlighted by a recent statement issued by women in Idlib.

Policy makers should use Brussels to send a clear signal that the space for independent civil society groups, including women’s groups, is a key indicator of positive peace.

It should be a central tenet of any peace agreement, and – as such – one of the benchmarks for the provision of reconstruction support for Syria.

In countries neighbouring Syria, the space for Syrians, including women, to legally register and operate CSOs is also constrained. In Jordan, CARE has therefore sought to expand the space for Syrian women to have a voice in decision making through establishing ‘Syrian Women Leadership Councils’.

Currently present in four urban locations across the country, the women on these councils receive training and mentoring to take on roles in community outreach and gathering feedback on the quality of aid programmes they access.

In time, CARE hopes for the Women Leadership Councils to also engage Syrian women and girls as participants in policy decision making and accountability efforts.

With UNHCR having recently adopted a revised global action plan to implement its five Commitments to Refugee Women and an updated UNHCR Age, Gender and Diversity policy, we are hopeful that the Syrian Women Leadership Council is the kind of initiative which can be scaled-up. The coming year will also see the roll-out of a new UN Inter-Agency Standing Committee (IASC) accountability framework on gender in the humanitarian system, detailing responsibilities for gender at different levels of humanitarian leadership and coordination.

At Brussels and beyond, donors should review funds they provide and their political engagement in the region to press for accountability and accelerate progress on these efforts.

At the London Conference on Syria in 2016, commitments were made to open up work permits for refugees. Yet we know that in Jordan only 4% of work permits issued to Syrian refugees have gone to women.

Research by CARE and institutions like the International Labour Organisation is also pretty consistent in showing what the challenges are. Where refugee women are dependent on the local employer to access a work permit, this puts them in a situation of dependency and at heightened risk of exploitation. Refugee women also commonly have serious concerns about travelling long distances to workplaces, and prefer home-based income-generating opportunities. The sectors open to refugees are also generally not those which women can so easily participate in (eg construction).

All of this requires both policy change and action to overcome these risks and obstacles by host governments, as well as political, technical and financial support from the international community.

Similarly, inside Syria, the effects of the conflict on men – conscription, arrest, displacement, and death – has meant that more women have become the sole bread winner of the family. Donors increasingly frame funding in terms of resilience, including livelihoods. Recent analysis by the Syria Resilience Consortium, which CARE hosts, highlights how women face different constraints and obstacles in accessing livelihoods (eg access to childcare and cultural norms).

In the words of Maha Al Nimer, a CARE gender advisor:

“Assessment of women’s inclusion in livelihoods programmes needs to shift beyond numerical inclusion. It cannot remain at the level of 'X number of women participated in Y number of trainings'. We need to see a more substantive assessment of their participation and the outcomes of this for them, and we should focus more on women’s leadership.”

The international community has made a range of commitments on addressing gender-based violence (GBV) and sexual and reproductive health (SRH) in emergencies, including the Call To Action on Protection from GBV in Emergencies and the 2017 Family Planning Summit agenda on humanitarian SRH efforts.

This started to translate into increased funding to GBV response in the Syrian response, but funding remains inadequate. Even less progress has been made on GBV prevention and the challenge here is in tackling social norms.

In Lebanon, CARE has partnered with ABAAD to bring experience from our work, in the Balkans and other contexts, on engaging with men and boys on gender issues to open up conversations about the rights and needs of both men and boys, and women and girls, in the home and the community.

These kinds of strategies are key to tackling the social norms preventing access to family planning or driving child marriage. At Brussels, donors and host governments could commit to scaling-up these kinds of initiatives.

On both SRH and GBV in Lebanon, Turkey and Jordan, there remain also important policy related obstacles.

For example, earlier this year, the Government of Jordan announced that subsidised medical fees, including access to reproductive healthcare, would cease for refugees. Obviously higher fees can force families to postpone treatment or deprive them of it. Costs involved can also lead to debt and/or damaging coping strategies like child labour or early marriage.

Recent studies show that the heath sector has suffered from chronic underfunding in Jordan, which could explain the pressures that inform the government’s announcement. So Brussels could provide an opportunity for donors and the Jordanian government to reassess the levels of funding provided to health, and how to ensure refugees can access the services they need.

Dialogue between the international community and host governments at Brussels and beyond could contribute to positive change.

When it comes to GBV, the past year has seen Lebanon and Jordan take important steps on legislation, notably repealing in Lebanon the so-called ‘Marry Your Rapist’ law. Yet there remain numerous legal obstacles in refugee-hosting countries to protecting women from violence, including both Personal Status Laws, which have implications for child marriage, and challenges that refugee women face as they often lack basic civil documentation, such as marriage and birth certificates.

More in this category: « Islamic microfinance: Shari’ah compliant and sustainable? Global Findex shows 1.2bn increase in people with bank accounts – but where are the women? »