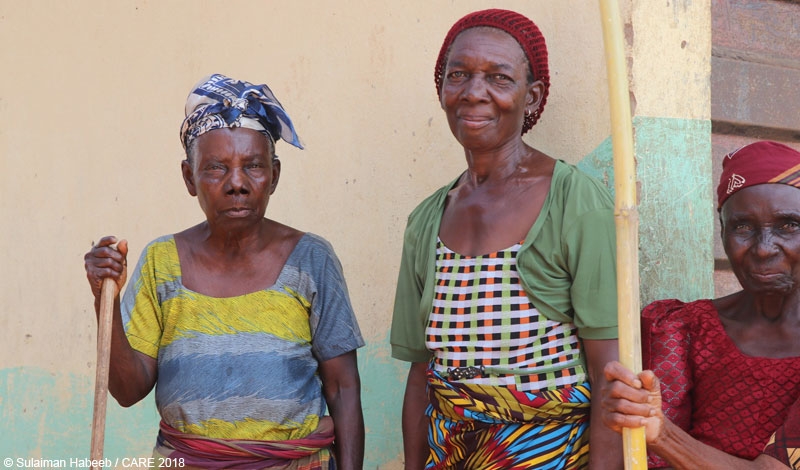 Women in Anambra State, Nigeria, at a building used as a temporary shelter following flash floods that displaced them from their homes

January is an excuse for New Year’s resolutions and ambitious plans that may, or may not, translate into reality. So we at the CARE Gender in Emergencies team thought we’d share our top three hopes for 2019 too!

1. The outrage over safeguarding failures last year translates into sustained, deeper and longer-term action to protect and empower women in crisis response.

Last year, attention to incidents of sexual harassment, exploitation and abuse was a wake-up call that ‘business as usual’ cannot and must not continue. Action on the gendered ways in which people are vulnerable to exploitation in times of crisis cannot be put in the ‘too difficult’ box or ignored until the crisis is over.

High-level events and declarations convened by Canada, the UK and others helped to focus minds, in particular on steps to ensure abusers cannot work for aid agencies. But CARE and others also highlighted how deeper efforts are required to ensure that such violations are prevented and/or more effectively addressed.

Over the course of this year, several moments could lend themselves as opportunities to rally donors, UN agencies, NGOs and others on longer-term actions to address these issues. For example, June 2019 will be the ‘one year on’ moment from the G7 Whistler Declaration on Gender Equality in Humanitarian Action and a G7 Whistler Declaration on Prevention of Sexual Exploitation and Abuse. A high-level event is planned, at which agencies could outline more detailed steps they will take.

What could sustained, deeper and longer-term action on these issues look like? As CARE we just put out a policy discussion paper outlining options on this. For example, we know that the problems that need addressing go beyond the level of individual projects or agencies, and require action at an organisational and inter-agency level. So donors, UN agencies and NGOs need to shift beyond the current focus on project-level accountability for gender towards creating a process to measure and hold ourselves accountable for organisational-level change on gender, inclusion and accountability.

The ICRC has already taken some very encouraging steps forward on this towards creating a more “diverse, gender-balanced workforce” as summarised in a blog by its director, Yves Daccord. The International Federation of the Red Cross and Red Crescent launched new commitments to increase women’s leadership over the next four years last November. So we hope all humanitarian agencies spell out similar steps in 2019 to address gender, inclusion and accountability.

2. Whatever the future for Syria and other contexts affected by forced population displacement, there is no compromise on the rights of refugee women.

At the end of 2018, governments around the world – with the exception of the USA and Hungary – endorsed the new UN Global Compact on Refugees. The Compact aims at rallying governments and others to a more effective and joined-up approach to assisting and protecting refugees. CARE welcomed the Compact’s attention to issues like protection from gender-based violence, and the access of refugee women and girls to education, livelihoods and other basic forms of assistance.

Sadly, it is not yet clear whether commitments in the Compact will translate into action on the ground. The shameful global trend towards erecting barriers – both legal ones and literal physical walls – to deny people a place of refuge from violence and persecution is likely to continue into 2019. For example, there will likely be increasing pressure to expedite the return of refugees to Syria even in advance of effective guarantees that they can live there in dignity or safety.

So at CARE, we will look for opportunities to work with others to translate the Global Compact on Refugees into practice in a way that puts the protection and empowerment of refugee women and girls at its heart.

3. The humanitarian system learns to systematically involve local women and local women’s groups in work on the ground, not just tokenistic events around International Women’s Day.

The international community has now talked-up its commitment to the ‘localisation’ of humanitarian action for several years. The increasingly prominent roles played by local women’s civil society groups in many of the current major crises (Syria, Yemen, DRC) can no longer be ignored. Female civil society leaders have risked their lives at the frontlines of conflict, and some like Malak Khoubia of Women Now in Syria lost their lives doing so.

So in 2019, we want to see efforts by donors, UN agencies and INGOs shift beyond rhetorical recognition of those efforts to practical action in solidarity and support of them.

One exciting opportunity on this front which CARE is supporting is a new ‘Task Team on Localisation’ under the GBV Area of Responsibility, which in turn sits within the Global Protection Cluster. Through the Task Team, we’ll be supporting a whole series of regional processes (in the Middle East, Asia and sub-Saharan Africa) to outreach to local civil society, UN agencies and NGOs to identify ways to more meaningfully engage local CSOs in protection and GBV efforts.

Very tangible options could include UN agencies and INGOs ‘buddying up’ with local women-led CSOs to support them to engage on a sectoral basis, such as through needs assessments, cluster processes and input to the UN Humanitarian Response Plan in each context. A review could also be undertaken to identify ways in which local women’s groups can better access funding through the UN Pooled Funding mechanisms. Whatever happens, we need to shift during 2019 from generalised debate over the roles of local women’s groups to specific, practical actions to support them.

Gloomy or optimistic for 2019?

From some perspectives, it’s hard to avoid a gloomy outlook for 2019. As powerful leaders in government or the media argue against human rights and emphasise very narrow concepts of the national self-interest, then women’s rights inevitably suffer around the world.

Yet every day at CARE, we have the privilege of working with women and girls living in some of the most dangerous and dire circumstances, but who persevere and take steps to improve their conditions, and those of people around them. Their dignity is inspiring. So our three hopes for 2019 are shared in the spirit of starting this year with eyes open to the risks we all face, but with minds open to the options we have to navigate them.

More in this category: « What happens when you think of poor women as economic powerhouses? The world changes. Offering insurance to help poor households with disaster risk management – reflections from CARE’s experience »