It’s time to focus on child marriage in emergencies 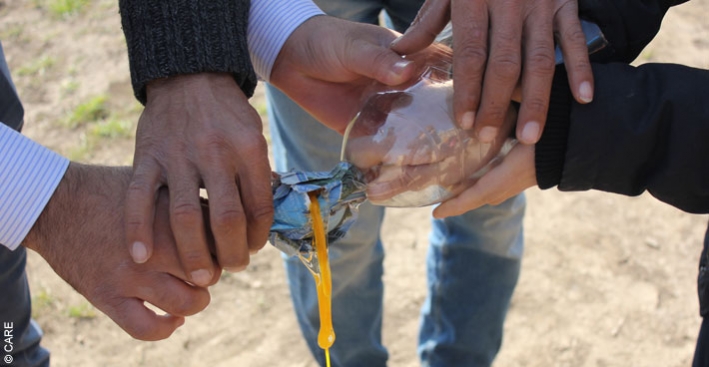 Information Volunteers, who work with Syrian refugees in Turkey to raise awareness on the issue of child marriage, demonstrate the risks of child-birth by girls with under-developed pelvises by attempting to push a wrapped-up egg through a bottle

Over the past 20 years much has been done to ensure that responses to sexual violence in emergencies are put in place. Years of advocacy, lobbying and implementation on a shoe-string have ensured that gender-based and sexual violence is at least being talked about in the right places and at the right level (such as last year’s Global Summit to End Sexual Violence in Conflict, led by William Hague and Angelina Jolie). But are we turning a blind eye to one of the biggest, and most silent, human rights violations of our time?

Gender-based violence in its multiple forms increases during emergencies and in humanitarian contexts. During the early stages of a response, the focus for most GBV actors has been on responding to sexual violence through healthcare as a life-saving measure. However, this has meant that in humanitarian contexts we are not responding to the crucial issue of child marriage in emergencies.

Child marriage is a form of slavery, a form of protracted sexual violence, and a cause and effect of other forms of GBV (such as physical, sexual and emotional violence within relationships, denial of inheritance and education). The time has come for the humanitarian community to join together to prevent child marriage in emergency contexts, before inaction results in exponential increases in incidents and catastrophic effects on the child, her current and future family, her community and society as a whole.

The biggest gap in humanitarian programming

Since the report was written, further evidence has been published which supports the report’s simple statement: we are turning a blind eye to the protracted sexual slavery and life-endangering nature of child marriage in emergencies. The Global Child Protection Working Group released a compendium of child protection indicators from across 42 countries which have a Humanitarian Coordinator or were on the Inter-Agency Standing Committee’s Early Warning Early Action list (up until March 2015). By taking the figures from those 42 countries (which include countries in East and West Africa, Eastern Europe, the Middle East and North Africa, and Latin America) for child marriage, we see that of these 42 humanitarian contexts, just two countries had no registered child marriages (Libya and Myanmar). On average the percentage of children in each country married before the age of 15 was 10% and those married before the age of 18 (but over the age of 15) was 34%. Although CARE’s report focuses on the Syrian context, child marriage in emergencies is an issue which is prevalent in a lot of the places humanitarians work.

If you are thinking of implementing a child marriage in emergencies intervention (and I implore you to do so), you might need some stock answers to barriers presented by the people in the field who might not be as convinced as you are.

Some stock answers to some stock barriers

“It’s a part of people’s culture, we don’t need to get involved”

This is not about preaching to people on how to live their lives. CARE believes that the life-saving, far-reaching outcomes of preventing child marriage in emergency contexts far outweigh the barriers to implementing this programming. Just because something is difficult, doesn’t mean we shouldn’t do it.

“It isn’t a priority”

In the words of one of our Information Volunteers in Turkey (more on them below), “We cannot wait until it is a bigger problem – our girls should be protected from the destiny of early marriage.”

“Isn’t it all about bride price/dowry? How are we supposed to tackle that in an emergency?”

Our study indicates that raising money from bride price is not the primary motivation for most families who marry their children. In our focus discussion groups and interviews, child marriage was seen as a form of ‘protection’ and a way for families to keep the ‘honour’ of their daughters. It was also seen as a way to reduce the number of people in a household and the related economic burden of feeding their child, clothing her, etc. Older unmarried girls start to feel the rejection from their families as they are seen as an added burden to protect and a source of worry regarding their so-called ‘honour’. Therefore, with this knowledge, there are specific, targeted interventions which can take place to prevent the triggers for increase child marriage.

“If it protects her, isn’t it better for her?”

A concerning short-term issue stemming from non-registered marriages in Syria is that a man may argue that the couple were not officially married at all and send the girl back to her family after they have had sexual intercourse. In these cases the girl would be incredibly unlikely to marry again and the girl’s and the family’s reputation would be damaged by the associated stigma. The issues presented above about the health and social impacts of child marriage may also be used to address this barrier.

Rape Child marriage as a weapon of war

For many years, the international community has focused on the heinous crime of rape and sexual assault during emergencies – an issue that Angelina Jolie and William Hague have spearheaded international attention on. It is therefore important to note that if the international community continue to focus on one classification of gender-based violence in isolation and as the only life-threatening issue, huge pieces of the puzzle will be missed, as will important opportunities to prevent all forms of GBV by addressing the root causes, rather than the consequences.

“OK, I’m convinced. Let’s try to get some funding”

Here, the international community needs some support from donors.

Despite the heightened fervour from the international community and press surrounding the issue of child marriage in the Syrian context, inside Syria:

Donors must lead the way in providing significant funding for child marriage prevention and response work in emergencies.

As child marriage: (1) is a gateway to other forms of GBV both before the girl is married (boy child preference, denial of education) and after the girl is married; (2) has life-long impact on the individual, the family, the community and society; and (3) contributes to fatalities of young girls and their babies, especially in contexts with poor health care – it is vital that child marriage is addressed in emergency-affected communities from the onset of crisis and that this important prevention work continues throughout and beyond the emergency response.

Without donor leadership, agencies will be unable to put interventions in place, even if agencies are able to get to a place where we can implement.

There is scope for a range of interventions to take place in the same context – from mainstreaming the prevention of child marriage into other sectors, to stand-alone primary prevention.

“To protect her honour” was inspired by our new Information Volunteers programme which is being piloted in Turkey and, since the completion of the report, in Nepal too. The programme was originally created in response to the influx of refugees from Kobane into Turkey towards the end of 2014.

CARE’s Kobane refugee response acted quickly, through our Information Volunteers programme, to inform the displaced community about the physical and social impacts of child marriage. We did this with the full knowledge that:

The programme is in its infancy, but already we have feedback from the communities we work in, in Turkey, that the work of the Information Volunteers is preventing child marriage – after all, Syrian families don’t want to purposefully put their girls in danger.

In addition, the Information Volunteers are engaged in working on promoting referral pathways for GBV and in psychological first aid (PFA) which allows the Information Volunteers to become entry points for case management, to support the community psychosocially through activities and events, and to enable them to become opinion leaders in their communities. These are skills which they can take back to Kobane when the time comes to return, and thus we expect that this simple programme will have longer-term, lasting impact – certainly on the lives of the girls who will now not be forced into marriage.

Let’s hope that in the next emergency, those agencies responding will work together from the very start, to ensure that girls and women don’t have to tell the same story again and again.

More in this category: « Putting the EMPHASIS on migration: What do you think are the priorities for the women, migration and development agenda? Climate change resilience: How a baseline study sets the framework for achieving impact »