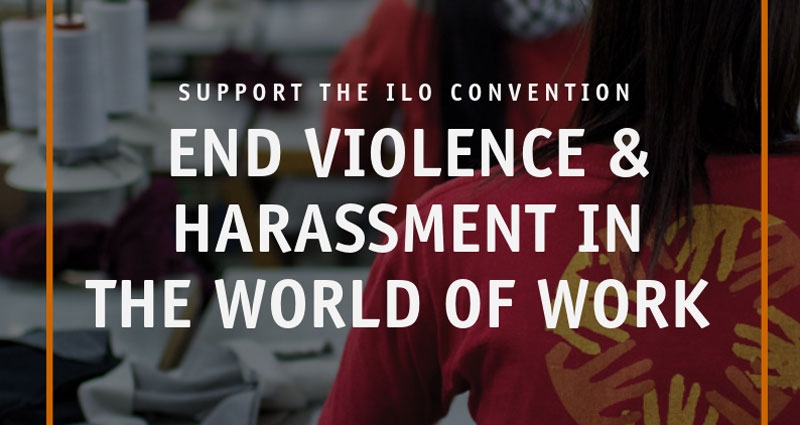 Movements like #MeToo, #YoTambién, #BalanceTonPorc, #NiUnaMenos and others have sparked widespread debate; violence and harassment against women is being exposed in more sectors, and the violence endured by women who are often less visible is gaining more attention. But there’s one debate taking place that more people should know about – here’s 5 reasons why...

A global treaty for a worldwide problem

More than one-third of the world’s countries have no laws prohibiting sexual harassment at work, leaving nearly 235 million working women vulnerable. Gender-based violence and harassment encompasses unwanted behaviour at work or on the way to and from work. Behaviours include physical, verbal and sexist abuse along with bullying, stalking, and others. It’s one of the most widespread rights abuses and every country is falling short in addressing it. During these #16Days of Activism against Gender-Based Violence CARE is joining forces to call for a global treaty by the International Labour Organisation (ILO) to help make the world of work safer for women everywhere, in every sector. We are adding our voice to those saying #HearMeToo loud and clear and to the many others saying #Thisisnotworking and you can join us @CAREGlobal.

The ILO is the only ‘tripartite’ agency of the UN (made up of government, employers, and workers’ representatives). This means governments and their social partners in the economy can develop labour standards and policies together. Its Conventions outline the tenets of healthy working conditions. Way back in 1919, the first Convention limited hours of work for the safety and health of workers. Now, 100 years later, an equally ground-breaking Convention is in sight: one on violence and harassment. This ILO Convention is the first-ever global attempt to try and tackle this shocking reality; if adopted, the Convention (the latest text of which is here – see pages 15-23) will mark agreement by governments, employers and workers on the first internationally binding commitment on ending violence and harassment in the world of work.

The time for action is now

Six months from now, from 10-21 June 2019, governments, employers and workers’ representatives will meet at the International Labour Conference – the highest decision-making body of the ILO. They have the opportunity to agree to a new global treaty – an ILO Convention – and guidelines (a ‘Recommendation’ in ILO-speak) to address violence and harassment in the world of work. At present, most governments have publicly declared their support for a treaty, but until the text of a strong ILO Convention is agreed and adopted, it’s time to put the spotlight and pressure on, to make sure that all governments – joined by businesses and trade unions – negotiate the best treaty there can be.

Leave No One Behind

For a Convention to be effective, it must be inclusive. That means everyone should have a voice in deciding what it looks like and what it covers. This includes the workforce itself (through trade union representatives), business (through employer bodies), national legislators, and civil society including women’s organisations. The ILO Convention discussions should involve all of these actors. As important is that the ILO Convention itself does not leave anyone behind. That means agreeing a definition of violence and harassment that covers all situations and a definition of “worker” and an agreed scope of “world of work” that means the standards will protect all workers whatever work they do. And while no Convention will be perfect, a strong framework should set standards to eliminate violence and harassment in the world of work, not for some but for all.

A global agreement that works in practice nationally

Adoption of an ILO Convention in June 2019 would be the first step to building accountability on this issue globally – and changing the narrative for women everywhere. Signatories to this Convention would need to step up and address these matters, making responsibilities clear for all sectors. Global standards are what countries must adhere to, and that means governments implementing legislation against violence and harassment in the world of work at a national level. A government ratifying an ILO Convention commits to applying it in national law and practice, and reporting regularly on its application. The bar can be raised to protect even more women in countries across the world. This is why it is so important to act in solidarity for this global agreement and to join with others for national change: for ratification of the ILO Convention, for new policy and better practice, and for a new culture of respect for the right to work free from violence and harassment.