Home // Development Blog // Refugees: A spiralling politics of fear and the imperative for compassion

Refugees: A spiralling politics of fear and the imperative for compassion 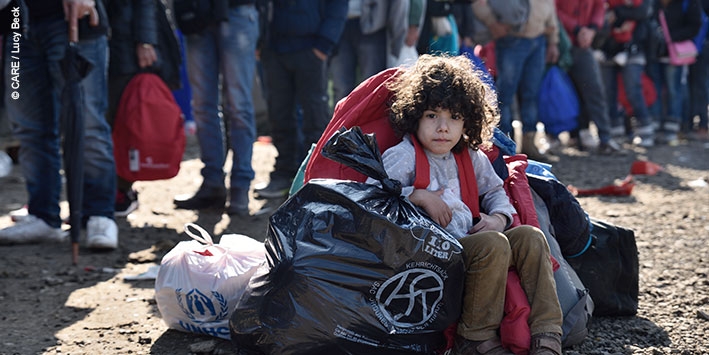 Chloe Day, Programme Manager for CARE International’s refugee response in Turkey, explains how a language and environment of fear around the refugee crisis is undermining our humanity.

When I read the news about Jo Cox last week, something inside me broke. I don’t know exactly why and I don’t know what it was but I don’t think it was my heart.

I used to think that heartbreak was something that happened in an instant – a dramatic, cymbal-crash of a reaction; and it can be that. But being an aid worker in the Syria crisis response has taught me that there’s another way your heart can be broken: bit by bit; story by story; bombed hospital by bombed hospital; family by family, trapped, abandoned, ignored, betrayed.

I’ve learnt that it’s not always the most obviously tragic things that have a lasting effect on you. Actually, it can be hard to fully comprehend the weight of the worst things or hard to find the time or space or words to process them, amidst an aid worker’s busy days. Sometimes it’s the understated things with more symbolic meaning that linger in your thoughts.

Last month, I met a little boy called Hussein who found refuge with his extended family and older brother in southern Turkey, where CARE is providing humanitarian assistance to Syrian refugees. Hussein’s mum and dad are still in Syria. He doesn’t go to school because his brother doesn’t think it’s safe and he left Syria to find work to help support his family back home. Hussein used to like math. When asked what he wants to be when he grows up, he said: "I just want to work. Whatever work there is, I'll do it." He’s 12 years old.

Can you imagine what those sentences really mean and how many children’s lost hopes and dreams they represent?

I know that I have an unusual standpoint and that, in life, we tend to surround ourselves with people who think in the same ways we do. But in reflecting on Hussein’s story, I find the debate on the existential threats posed by refugees hard to stomach. Showing human compassion and allowing refugees their right to seek asylum in numbers that western countries can cope with, is not something that will leave us at significant risk of extremism.

The people so many countries want to keep out are those already fleeing extremists. Leaving refugee children to grow up in dire conditions in overburdened countries neighbouring the very conflict they fled, where they desperately search for work, hoping to feed their families and so cannot receive the education they have a right to, hearing stories of Western politicians and people in the media speaking of them as “cockroaches”, coming in “swarms”, running away when they “should be staying to fight”, and using the language of hate – this is what creates the anger, desperation and disenfranchisement that make people vulnerable to extremist recruitment. And we’re doing that to far more people than our countries are allowing in.

People have genuine concerns about strain on resources, particularly in times of austerity; I understand that and I think they need to be recognised and responded to. What frustrates me is the unwillingness of our politicians to engage in meaningful, informed conversation, to even try to overcome those fears; to stand up for what is right and actually communicate with, and change the minds of, their electorates. Instead, these fears are twisted and stoked for political gain.

More than 80 percent of displaced people in the world are living in developing countries. Turkey is hosting over three million Syrian refugees. A quarter of Lebanon’s population are now Syrian refugees. The “refugee crisis” in Europe is only a crisis because of the way the EU has chosen to deal with it, by turning its back and sealing its borders instead of developing a coordinated and effective system for responding to refugee arrivals in Europe, allowing for safe transit routes that avoid unnecessary risk to personal safety or of exploitation.

In the globalised world everything is interconnected. By closing their borders, the EU has put the countries neighbouring the conflict in a position where they must seal their borders with Syria. This means that there are hundreds of thousands of men, women, girls and boys we have abandoned with nowhere to flee. They are trapped, right now, at the borders with no access to safety.

Geopolitics and electoral fear are being allowed to render international law meaningless. We are undermining the very pillars that enshrine our rights as humans. I believe that in the future, when the war in Syria is over, we will look back on the crimes we allowed to happen with the same shame we should feel about Bosnia and Rwanda. To recognise this as it is happening is something extremely hard to cope with.

While I wasn’t lucky enough to know Jo Cox, we are from the same place and, from what I know of her, I care about the things she cared about. CARE colleagues who worked with her in London describe someone who was incredibly selfless and genuinely driven by the causes she believed in, often arranging opportunities for CARE and other NGOs to support Syrian voices being heard in Parliament.

I don’t think we know enough yet about the motives of the person who killed her to really make any judgments about what it means, but I do know how it makes me and many other people feel and I know that the power of those emotions left me weeping. It makes me feel lost and demoralised and afraid for our future.

While the UK is my home, I think this currently applies to many so-called “developed” countries. This trend of a politics of fear and division, that lacks any meaningful conversation, has to be stopped. It can only force a negative spiral that will leave all of us worse off than we are now, no matter what “now” looks like for you.

I don’t want to feel that my faith in humanity is unfounded. I want to be able to stop feeling ashamed.

Chloe was Programme Manager for CARE’s Refugee Response in Turkey from 2014 to 2017, managing the Refugee Team and overseesing CARE’s activities across four provinces. Previously she was a Humanitarian Programme Coordinator, working with CARE country offices responding to the Syria crisis, and supporting the CARE-led Integrated Emergency Response Programme for Yemen, a consortium of five INGOs. Before joining CARE in 2012, she worked in East and West Africa, and with health NGOs in the Democratic Republic of Congo and the West Bank.

More in this category: « Dear Daddy is a wake-up call to the good guys – the struggle for gender equality and a life free from violence needs all of us The MasterCard Foundation: Why we’re signing the Linking for Change Savings Charter »