Home // Development Blog // Ten years on from the Indian Ocean tsunami: The challenges and priorities for humanitarian action

Ten years on from the Indian Ocean tsunami: The challenges and priorities for humanitarian action 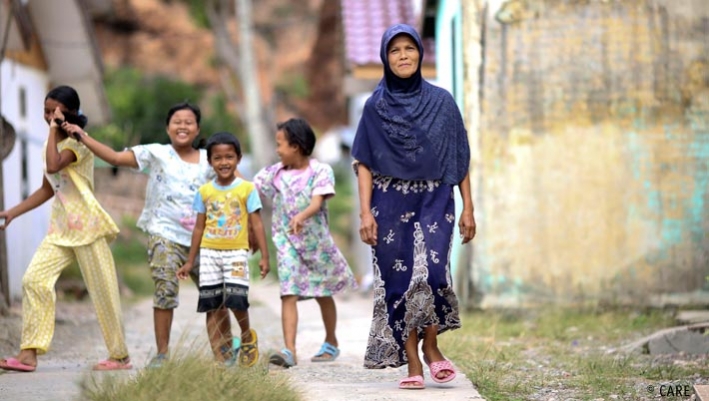 Ernawati, a woman in Indonesia who in the aftermath of the tsunami received a Family Survival Kit from CARE, and support in starting a small business which is now thriving

Ten years ago on Boxing Day, the Indian Ocean tsunamis crashed into the shorelines of 14 countries, killing more than 228,000 people and making almost two million more people homeless and bereaved. The scale of the disaster and the speed with which entire towns and communities were swept away was something the modern world had never seen before. This was to change the way we prepare for and respond to crises forever.

At the time, I was working in 10 Downing Street, preparing for 2005, the Year of Africa, Make Poverty History and the Gleneagles G8 Summit. One of my grisly responsibilities was to update the Prime Minister on the number of British Casualties, as they gradually crept up and up eventually to 149. One of those who died was Robin Needham, who had worked for CARE since 1980. Robin was on a family holiday, but it was in character that he should die helping others; he was last seen shepherding people to safety on a remote island in southern Thailand, before he was swept away.

In my role working in 10 Downing Street, I accompanied the Prime Minister to the Disasters Emergency Committee headquarters to thank them and the British public for raising £392m to respond to this totally unprecedented emergency. CARE, of which I am now the Chief Executive, is a member of the Disasters Emergency Committee and so was one of the British NGOs which used that money to help people in the aftermath of the tsunami.

More than a decade on from the Indian Ocean tsunami, CARE finds itself responding to more frequent and complex humanitarian crises in a world that is increasingly dynamic and unpredictable. In this year alone, the number of people displaced by conflict or disaster – 51.2 million – is higher than at any time since the end of World War II. We still draw on the lessons from the Boxing Day tsunami and apply them today.

Many more of today’s humanitarian crises are linked to conflict, invariably making the delivery of aid to those who need it the most, more difficult and treacherous. In growing numbers of contexts armed groups no longer respect the neutrality of humanitarian agencies and aid workers have become increasingly targeted, as have the civilians we are trying to serve. This affects how we work, where we can work, and the cost of saving lives.

Human-induced climate change is changing patterns of extreme weather, including floods, cyclones and droughts, making them more intense, more frequent, more widespread, less predictable and longer lasting. Climate change magnifies the risk of disasters everywhere, particularly in those parts of the world where people are already poor and vulnerable and where extreme weather events tend to occur.

In 2007, the world’s demographic scale tipped: for the first time in history more than half the human population, 3.3 billion people, resided in cities. By 2050 this number is predicted to reach 6.25 billion, with 80% of the increase concentrated in less developed countries, particularly in Asia and Africa. Unless decisive action is taken it is projected that, of those 6.25 billion, nearly half will live in disease-ridden slums and be extremely poor, malnourished and vulnerable to the smallest of shocks. Social vulnerabilities will be heightened because inequalities can also trigger exploitation and violence.

To meet these growing challenges, the humanitarian world has had to overhaul its response.

How we respond more effectively

Vitally, we listen to and respond to the needs of the people we serve. Across CARE’s responses, accountability, particularly to people in crises, is now firmly embedded. Central to CARE’s emergency response ethos is ensuring that those in crisis have a say in planning, implementing and evaluating CARE’s work. In post-tsunami Indonesia, CARE’s outreach teams met daily with survivors to share information and receive feedback. There were also complaints hotlines, information boards and suggestion boxes.

CARE’s work has a special focus on women and girls who are disproportionately affected by disasters. We partner with all sectors of society to empower women, not just in the home, but financially, so that they are able to start their own businesses and can afford to send their children to school, and politically, so that they can participate in making key decisions for their communities or even country. We work closely with men and boys to bring about changes in traditional attitudes so that fewer women suffer sexual violence.

We build strong relationships with local partners. Their local knowledge means we are better able to understand the context in which we work which makes us better equipped to respond. They have greater access which means we are able to get assistance to people more quickly.

But we also go deeper than that. We don’t just help communities recover after an emergency; we build their resilience so that they are more prepared and more able to cope when the next one comes, as it inevitably will. We aim to tackle the underlying causes of crises and strive to protect the most vulnerable.

The reality is that humanitarian crises are rarely one-off events; they are both causes and consequences of poverty and vulnerability. CARE plans its responses, therefore, not as brief exercises in aid delivery alone, but with deliberate intent to build resilience, empower communities to lead their own recovery and combat social injustice and gender inequality.

CARE recognises the private sector is an increasingly prominent actor in emergencies, offering services and inputs such as mobile phone-based early warning systems, and harnessing private resources to respond to local needs in a way that traditional non-governmental organisations cannot.

Following the tsunami, the ‘cluster’ system emerged, which brings together UN and non-UN agencies to coordinate a humanitarian response, according to capacities and expertise. This has enabled us to avoid duplication and to meet more of the affected population’s needs, more efficiently.

Looking ahead, CARE strives to continue to improve its efforts and work more closely with new and existing partners to share resources, experience and expertise.

A significant opportunity for this is the upcoming World Humanitarian Summit in 2016. Organised by the United Nations, it is a global initiative to bring together the views, concerns and expertise of all stakeholders, from communities and local businesses, to governments and the UN, to international aid agencies and local civil society groups.

Among our recommendations will be the need to advocate strongly for women and girls, ensuring that their needs and rights are fully integrated in emergency preparedness and response; and investing in lasting impact in emergency response – not only saving lives and building back safer, but empowering vulnerable people.

More in this category: « Women must have a voice in the post-2015 MDGs Five reasons to apply for an Advocacy Internship at CARE International UK »