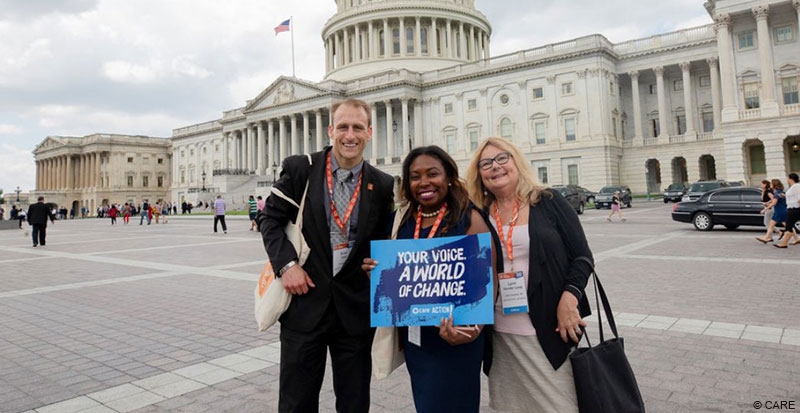 CARE Action campaigners in the USA

For the first time in history, the United States has elected a woman of colour as Vice-President. It’s a historic moment for celebration. But the election also showed that America is a country deeply divided, with a lot of work ahead of us to make sure Americans are all constructively working for a better future – a just future – for everyone. As often happens, I find hope for that future in the amazing stories from CARE around the world, and the people who have found ways through divisive conflict. As always, Americans can learn a lot from people in all parts of the world. They show us it’s possible.

Hanaa in Lebanon is hosting Syrian refugees –something that puts stress on her neighbourhood and isn’t always popular. She says:

“These are people who have lost everything and had to flee their country because of war. Isn’t all that enough? Shouldn’t we try to help them instead of adding to their misery?”

Lebanon isn’t the only country building paths for the future in the middle of a scary situation. CARE has 272 projects working on governance, civil society, and peacebuilding that reach 11.1 million people directly and 39 million indirectly. Take a look at the hope those projects provide.

Conflicts are going down

In Uganda’s Women Lead in Emergencies project, women organised inter-ethnic peace groups to overcome conflict in their communities and convinced their community leaders to reconcile between tribes. One participant said:

“I initially felt uncomfortable sitting next to the tribes we have been fighting with back at home but I realise I have been holding a grudge with the warring tribe for too long and yet we are all facing the same displacement problems. Now I am more confident to relate as well as eat with the same tribe and this is a great transformation in my attitude.”

In Papua New Guinea’s BECOMES project, the biggest impact communities report is an improvement in conflict-resolution skills. Community groups report being more functional, and they are more likely to include women and youth. In DR Congo’s Tufaidike Wote project, people were 26% more likely to feel that their communities had made progress towards peaceful conflict resolution.

People are more optimistic about the future

In Egypt’s Local Partnership for Accountability project, many people who were skeptical of the project said that their fears turned into optimism after they saw how the project worked. 65% of youth think services have improved, and 54% say they have a better relationship with service providers.

79% of people in Cambodia’s Implementing Social Accountability Framework project say the government is more responsive to their needs. 98% of minorities, women, and youth report improvements in services and lower discrimination.

Listen most to the people who suffer the most harm

Get the media involved

Palestine’s PEACE II project convened eight media groups to have a collective strategy to raise the profile of women in politics and to publish more content on women’s political participation. Listen to Bujar Hoxha in Lebanon, or Salah Hamwi in Turkey, talk about how critical it is to work with the media to diffuse social tension.

Cambodia’s Implementing Social Accountability Framework saw leadership change from a decision-making process that was made up of 100% men from ethnic majorities; now in target districts, 58% of women, 38% of youth, and 38% of ethnic minorities are participating in governance.

The Catholic church in DR Congo is adopting CARE’s sex-education course material into its pre-marital counselling sessions because they see the value for communities and for couples in the long term.

In Sri Lanka, the team convinced local tea plantation managers to adopt Community Development Forums that enabled them to spend 16 fewer hours resolving disputes than their counterparts. They also usually avoided strikes, which saved up to $13,300 per estate per day.

In Yemen’s Foundation for Peace project, 78% of decision-makers in the programme area said that the 4,050 youth who participated in district dialogues actually influenced their decisions. 89% of youth felt that they were able to better influence decisions in their communities.

In the autonomous region of Bougainville in Papua New Guinea, a region which has previously experienced decades of civil conflict, a CARE community resilience project worked with children in schools to spread the message and come up with solutions. One woman who participated in the project said:

“A big part of the change has been youth coming together in project activities, working in groups in trainings, supporting one another and listening to another and sharing ideas. They are building a lot of respect for each other, and they are more confident too.”

In the Jordan Urban Livelihoods project, 84% of participants said the programme changed their lives for the better because it allowed them to meet new people and learn new cultures. Women especially said they built friendships with other people in their class and were able to work together to solve their problems.

More in this category: « CARE: Five demands for climate justice to COP26 (if it had taken place in 2020) The importance of a faith-inclusive approach to development »