Home // Development Blog // Banks are targeting the ‘missing middle’ in developing countries – but should they be reaching further down the financial pyramid?

Banks are targeting the ‘missing middle’ in developing countries – but should they be reaching further down the financial pyramid? 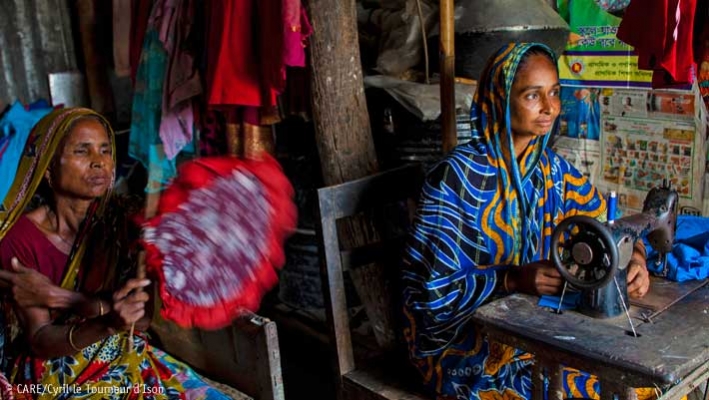 Asiya (right) has revived her dressmaking business thanks to a loan from her village savings group (Bangladesh, 2013)

I have just spent a few days in Dhaka talking to the Bangladesh Central Bank and a number of the key commercial banks in the country, as part of a research project into the role of banks in furthering financial inclusion. At CARE International, our focus is on the poorest people at the ‘bottom of the pyramid’, and the research so far has posed a key question – what do we think of banks placing a strong emphasis on the Small and Medium Enterprise (SME) market, rather than reaching further down the pyramid?

CARE’s engagement in financial inclusion is based on our model of Village Savings and Loan Associations (VSLAs), where a group of people in a poor community come together to save and to lend to one another. We’re now working to link these groups to the formal financial sector as their needs for financial services become more pressing and more sophisticated. So our approach to financial inclusion is quite strongly focused on bridging the gap between ‘bottom of the pyramid’ individuals, particularly women, and the commercial banks.

The problem of the ‘missing middle’

The research which CARE International UK is currently doing with Accenture, the global consulting firm, aims to uncover key trends in the role of banks in furthering financial inclusion in developing countries, with a particular emphasis on women living in poverty. However, we’re finding that some banks, both under central bank guidance and operating from their own commercial interests, are taking a specific interest in providing banking services to previously unbanked small businesses.

These businesses, sometimes sole practitioners but often having a small number of employees, are not among the poorest people in the countries where the banks work. But they are an important sector whose needs are widely recognised in the development community as not being met by the commercial banking sector. The lack of banks providing credit and services to these businesses is often characterised as the ‘missing middle’.

The challenge for our research

The question that we as a research team face is how much credit (sorry for the pun) we should give to banks which have a very strong commitment to this generally under-served and important market, but which may be doing very little for micro-enterprises, individuals and savings groups.

The reason for asking is that in two of the countries which I have now visited for our research, there is a strong emphasis, and a lot of innovation, from banks in reaching out to the small enterprises that comprise the ‘missing middle’. New products are being developed, new sales channels are being established, and banks are competing on convenience, rates, value-added services offered and brand positioning.

What I think we should do

It seems to me that we should be supportive of these efforts to address the ‘missing middle’, particularly when the businesses being supported by the banks are rural and/or run by women – traditionally the two most egregiously under-served market sectors.

However, we must continue to challenge the banks to reach even further down the pyramid, to the one person micro-enterprises, and indeed to people living in poverty who do not even have the opportunity to build a livelihood enterprise. Many banks will argue that this is the role of microfinance institutions: in a future blog I will pick up that challenge and attempt to explain why we still think the banks have a key role to play, even at the very ‘bottom’ of the pyramid.

More in this category: « Allies not leaders – How we work with men in support of gender equality Three key reasons for bringing the private sector into peacebuilding efforts »