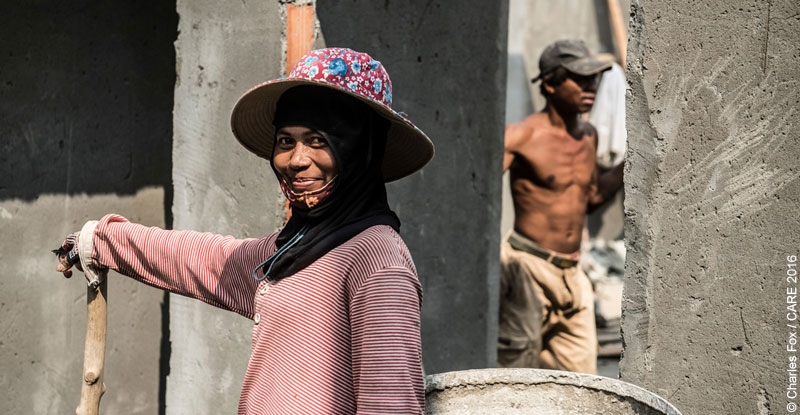 A female construction worker on a building site in Cambodia

The International Labour Organisation (ILO) has recently published its ‘Yellow Report’ on the input from states, employers, unions and civil society to the proposed new Convention on ending violence and harassment in the world of work. The Yellow Report’s wide-ranging provisions are welcome – but there are key areas that still need to be addressed in the lead up to, and during, the 2018 International Labour Conference (ILC) in May/June in Geneva.

1. Ensure that we don’t just have a “recommendation”

ILO ‘instruments’ are primarily of two types: Conventions and Recommendations.

A Convention is a legally binding international treaty. When ILO member states ratify a Convention, they commit themselves to applying the Convention in national law and practice and reporting its application at regular intervals; in addition, complaints can be made against countries for violations of a Convention they have ratified, through the ILO’s supervisory procedures.

On the other hand, a Recommendation is a non-binding guideline which either: supplements a Convention by providing more detailed guidelines on how it could be applied; or stands on its own (ie, is not linked to any Convention). (See the ITUC campaign toolkit on the ILO Convention.) And as the ILO Office themselves say in the Yellow Report: “a Recommendation carries no substantive obligations and is framed on the basis that States will apply it as appropriate to their own circumstances.” (ILO Report, p4)

Currently the ILO Office (ie, the international ‘civil servants’ who sit at the centre of the ILO’s operations) has suggested that the ILC endorse a Convention and a Recommendation. This is the most powerful structure of ILO instruments providing a mechanism for national and international legal status and fairly detailed guidance on how these legal commitments should be achieved.

OK, so those ‘voting figures’ are quite complex, but the key points are:

Therefore a key concern is that at the ILC there will be insufficient support for a Convention, thus not giving legal status to the wide-ranging and sophisticated measures that the Yellow Report sets out.

Much of CARE International’s response to the earlier ILO Questionnaire was around ensuring that worker groups who are currently poorly protected against violence and harassment (eg domestic workers, workers in politics, sex workers) would be included within the Convention, by explicitly listing them in the document where other worker ‘types’ are mentioned.

An initial reading of the ILO Office’s explanation of how they see the wording of the Convention working implies that these groups will be covered by the Convention. The Office says: “international labour Conventions and Recommendations use the verb ‘include’ or the terms ‘including’, ‘such as’, or ‘inter alia’ to introduce a non-exhaustive list of items or considerations. Therefore, in the text, the terms ‘including’, ‘that includes’ or ‘should include’, wherever they appear in the proposed Conclusions, should be understood as referring to a non-exhaustive list.” (ILO Report, p4)

And the definitions in the proposed Convention, such as “‘worker’ should cover persons in all sectors, both in the formal and informal economy, and whether in urban or rural areas” plus “the workplace, including public and private spaces where they are a place of work” look like they are wide enough to cover the workers we are concerned about.

However, the thought remains that while this wording does, as a matter of logical and legal interpretation, cover those workers, the fact that to date they have had little protection and little voice may mean that we are simply postponing the fight to have their rights organised until later in the process when states have to ratify, legislate and implement the Convention. So to get the best results for these most vulnerable workers, I would like to see them explicitly included in the Convention.

3. Include unpaid care workers under the Convention

On a generous interpretation, then, the Convention could cover many of the workers about whom we are concerned. However, one group that still seems some way off from recognition are unpaid care workers. Unpaid care work is largely carried out by women and its critical role in supporting the economy is poorly recognised (see, for instance, the report Underpaid and undervalued: How inequality defines women’s work in Asia). Therefore unpaid care work, whether in regard to children, the elderly, the sick or the disabled, is not widely seen as ‘the world of work’.

CARE International’s response to the ILO Questionnaire highlighted this group: “There should be acknowledgement of unpaid care workers as a group under the coverage of the instrument or instruments. Although the instrument or instruments would be applicable to ‘the physical workplace, including public and domestic spaces where they are a place of work’ this category of workers should be explicitly mentioned considering that such workers have not usually been under the coverage of ILO instruments.” The Yellow Report however does not really discuss the issue, merely mentioning in passing the requests from a number of unions to include it. There is no ILO Office response to these requests and the concept of unpaid care is not discussed in the suggested text of the Convention and Recommendation.

Also missing from the Yellow Report and the suggested Convention and Recommendation is the concept of corporate value chains or supply chains. CARE suggested referencing the UN Guiding Principles on Business and Human Rights (UNGP) in the Preamble to the Convention: the Guiding Principles already set out that, for companies, “The responsibility to respect human rights requires that business enterprises… Avoid causing or contributing to adverse human rights impacts through their own activities, and address such impacts when they occur” and that “adverse human rights impacts that are directly linked to their operations, products or services by their business relationships” are included (Paragraph 13), thus bringing into the sphere of responsibility their value chains.

The proposed Convention is very clear that “violence and harassment in the world of work is a human rights violation”, therefore the overlap with the UNGP seems clear. Yet, despite listing in the proposed Convention Preamble a large number of other international instruments, the UNGP are not mentioned and there is no reference in the Yellow Report. This leaves open the possibility that companies can argue that they do not have responsibility for violence and harassment in the world of work in their value chains, and may even, on a negative reading, undermine the UNGP in that a Convention has greater legal status than the UNGP.

Yet we know that the policies and practices of companies at the top of value chains drive levels of violence and harassment across the chains, impacting workers in many countries. For instance, research by CARE in the garment industry in Cambodia showed that nearly one in three women garment factory workers report experiencing sexually harassing behaviours in the workplace over the last 12 months. The Ethical Trade Initiative’s (ETI) Guide to Buying Responsibly shows clearly the link from poor purchasing practices by companies at the top of the value chain to “harassment and abuse [of workers] from management”.

This is a significant gap in the suggested Convention and surprising given the ILO’s engagement elsewhere with the issues of ‘transnational’ enterprises, as for instance set out in the ILO’s “Tripartite Declaration of Principles concerning Multinational Enterprises and Social Policy” which explicitly recognise the role of the UNGP and further, that “Governments should ensure that both multinational and national enterprises… provide adequate safety and health standards… This would include steps to combat workplace violence against women and men.”

This major gap needs to be addressed by the International Labour Conference.

More in this category: « Four suggestions on how Doing Development Differently can better listen to and engage Southern civil society CARE's response to the parliamentary inquiry into sexual exploitation and abuse in the aid sector »