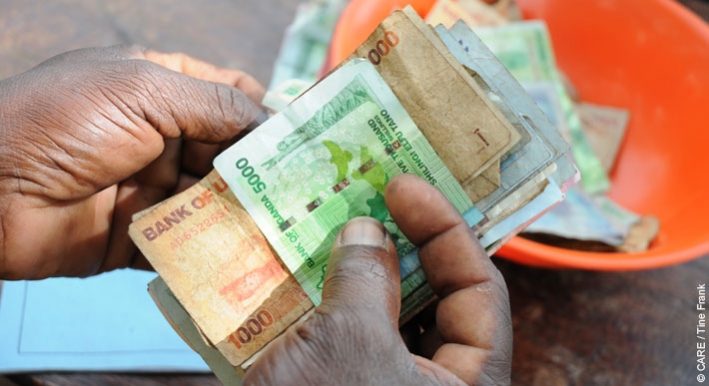 Counting money at a VSLA meeting in Uganda

The Financing for Development Conference in Addis Ababa from 13 to 16 July could be a key moment to build a framework for financing the work needed to eradicate poverty by 2030, and so build confidence for the effective pursuit of the Sustainable Development Goals and for a fair and ambitious climate agreement.

Central to any framework should be the mobilisation of domestic resources in developing countries themselves. We believe financial inclusion can play a key role in providing access to approximately US$100bn of new funding for development:

Savings-led financial inclusion, where the previously unbanked are brought into the formal financial system, can play an immediate role in bringing new resources into more productive use. Money previously held as small amounts of cash, often literally kept under the bed, is introduced into the banking system providing additional liquidity for lending, often in remote rural areas where micro and small enterprises find it hardest to access credit. This new liquidity is one of the cheapest and lowest risk forms of funding available to banks.

Research for the Banking on Change partnership between CARE, Barclays and Plan revealed that members of savings and loan groups (75% of whom are women) – once the group reached maturity (usually after about three years) and became linked to a bank – each had savings on average of $58 per year. Given that most of the two billion unbanked people identified by the most recent Global Findex Report live in developing countries, that means there is approximately $116 billion per year available for savings – an amount in the same order of magnitude as the total amount of Official Development Assistance for 2014, $134 billion, as measured by the OECD.

The path to formality and taxation

From CARE’s long experience of financial inclusion, we know that savings are frequently used by women to develop micro-enterprises, some of which grow substantially larger, requiring access to more sophisticated financial products from the formal sector. We also know that this engagement with the formal financial sector is a key step for micro-enterprises on the path to formality, in which taxes are paid and domestic resources are strengthened.

The role of financial inclusion

We therefore encourage the Conference to highlight the important role that financial inclusion can play, and recommend that governments develop inclusive financial strategies that reach the poorest members of society – we know that even those on less than $2/day can save, that those savings can empower them to build a better life, and that by bringing those savings into the formal financial sector, countries can have access to relatively low cost and low risk funds for development via mainstream banking.

Donor support is still required for the process of developing financial literacy – and therefore demand for financial services – among those living in poverty, and the process of providing people with access to those formal financial services. However, reaching the previously unbanked is becoming increasingly commercially attractive to banks, both because of the spread of very cost-effective mobile money accounts and through linking with savings and loan groups, both of which substantially cut the costs of providing formal financial services in remote and poor communities.

Also, we believe that banks will be increasingly willing to pay customer acquisition costs to link to the savings and loan groups when they are mature, since they represent high quality customers with an established track record. If this is correct, there is now an opportunity to fund financial inclusion and linkage to the formal sector on a ‘returnable capital’ basis, where ultimately the banks bear a substantial element of the costs of recruiting new customers.

We urge the UK and other donors/governments to seriously consider these options. The Conference negotiations look like they may be difficult, but almost all parties (donors, UN, World Bank, many Southern national governments, the private sector) are agreed that financial inclusion works. It should therefore be a key part of the discussions.

This blog was first published on the Business Fights Poverty website

More in this category: « Financial inclusion in developing countries: the alarm bells should be ringing for banks Private sector partnerships: getting to the heart of the matter »