Home // Development Blog // ‘Gender is not Summit-worthy’? – Five ideas for empowering women at the World Humanitarian Summit and beyond

‘Gender is not Summit-worthy’? – Five ideas for empowering women at the World Humanitarian Summit and beyond 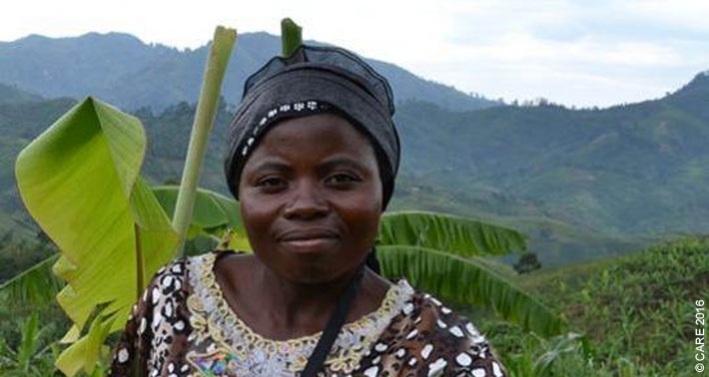 Rachele Nsii, a displaced woman in the Democratic Republic of Congo

Back in 2013, a senior UN policy-maker told CARE: “Gender isn’t summit-worthy.” Since then, concerted advocacy by hundreds of women and men has turned this around. CARE has played a leading role by co-convening the first global consultation with over 40 women from every region with the WHS Secretariat, and following up at the national level in Pakistan, Bangladesh, Jordan and elsewhere. So what can we expect from the Summit, and what are the next steps?

When governments and others convene in Istanbul, they will be asked to endorse five ‘Core Commitments’ on gender with a strong focus on protecting, assisting and empowering women in times of crisis. The most transformative commitment is the latter – rallying governments, UN agencies, NGOs and the private sector to promote women’s participation and leadership in humanitarian efforts. Recent years have already brought lots of attention to gender-based violence by the G7, the UN Security Council and governments like my own in the UK. What’s exciting about the WHS Commitments is that they don’t frame women as just victims or survivors, they call on us to recognise how women are amongst the first responders, and to support that.

Today CARE publishes a new ‘Global Impact Study’ outlining what we have learned from our own efforts to address gender in emergencies. We are also finishing up research in Jordan and the Philippines on how to strengthen accountability for addressing gender in humanitarian action. It is all well and good to endorse ‘commitments’ at a Summit, but how to ensure follow-up and accountability for these?

Here’s five ideas from me:

1. On the ‘Core Commitment’ to empower local women’s groups – Work is currently underway on the indicators for the global UN framework on disaster risk reduction agreed in Sendai last year. We know that if we wait until disasters strike, then it’s much harder to support women’s participation. So why doesn’t every donor, UN agency, NGO and government integrate indicators on meaningful participation by women into these?

Our experts on sexual and reproductive health rights (SRHR) tell us it’s bolstering women’s participation in humanitarian efforts that could be the biggest game changer. More women frontline responders will mean more women able to access SRHR services. CARE is launching specific commitments to triple its funding to local women’s groups in emergencies and to model good practice in our partnerships with them. As our impact study states, “working in partnership should mutually (versus top-down) build competencies and accountabilities” and avoid the basic INGO subcontracting of local NGOs on pre-set projects. We are setting specific indicators to measure if and how we do this, and so should others.

2. On the WHS push behind the global Call to action on protection from gender-based violence in emergencies process, why doesn’t every donor government that endorsed the call commit to ‘buddy up’ with a Southern government to support their capacity on GBV prevention and response, and achieve specific benchmarks on this by 2020?

3. In fact, the WHS also seeks to rally momentum behind the new IASC Guidelines for integrating GBV across different sectors of a response like food, water/sanitation and health. CARE’s shelter specialists are working on practical options for translating these guidelines into shelter programming in partnership with the International Organisation for Migration. Perhaps this should happen in other sectors too?

4. On gender-responsive programming, can we please all leave the Summit having agreed that sex- and age-disaggregated data, steps to translate that into programming, and women’s participation in design, monitoring and evaluation of programmes should be the norm? And not just a vague ‘tick box’ mention of this at the proposal stage, but actually systematically monitor this through funding?

This is 2016, not 1996 or 1896 for that matter. Yes there might be exceptions, but donors should ask agencies they fund to explain why. Gender-blind programming shouldn’t be acceptable. Our own study on our efforts on gender in emergencies backs this: “Mandating minimum gender in emergencies standards and the application of tools and approaches” has been key to programmes better addressing the needs of women and girls, as well as men and boys.

5. There’s also a WHS commitment calling for legislation on gender equality. This is important in some contexts perhaps, but I’m tempted to say if a government has to choose between a new piece of legislation or implementing any of the practical steps already mentioned above, then my vote is for the latter. If anything, a preoccupation with siloed gender-focused policies and institutions has partly been the problem bedevilling efforts on gender. We need the mainstream of humanitarian action, and national institutions responsible for health, civil protection, security and so on, to take practical steps to integrate gender into their work.

What of the wider WHS process and outcomes?

While much of the WHS process centred on assistance and funding, in fact humanitarian action should be as much about protection. Women activists we work with from Syria, Pakistan and elsewhere talk more about the need to hold governments accountable for respect of International Humanitarian Law (IHL) than almost anything else. The WHS might deliver some statements reaffirming humanitarian norms, but I suspect there will be inadequate action on accountability for this.

The WHS will also launch a ‘grand bargain’ on reforming the aid system to cut bureaucracy in the aid system and get funding to the frontline response. Again this is something women humanitarian activists consistently call for. Stop imposing your donor ‘fashions’ on us – peacebuilding last year, countering violent extremism this – and support us on our priorities, they say. Reform the impractical counter-terror policies which are stopping us from getting funding into areas where proscribed armed groups operate, they say. Donor funding policies mean that very little trickles down to grassroots women-led work and this needs to change.

At the Summit, CARE will announce actions we will take in support of the WHS Gender Commitments. I’m quite proud that ours are specific, time-bound and actually push us to do more than we’re currently doing. It will also be interesting to see how many women occupy which kinds of roles at the Summit. I think back to what one woman told CARE about the all-male assessment teams that had visited her village:

“Men who visit our village cannot assess my needs or those of my grandmother. Indeed, they cannot even actually physically see us or speak to us.”

If we are going to transform this, then we need to start from the top, including at events like this one. At the Summit on Monday evening, CARE is hosting a side event with some amazing women activists from Syria (Hivin Kako of Bihar Relief Organisation), Pakistan (Maryam Bibi of Khwendo Kor) and elsewhere on the panel alongside senior officials from UN Women, UN OCHA, Canada and Australia.

But it’s the women first responders’ expertise that we need to hear. So on that note, I end with three such women who won’t be at the summit.

“We cannot always rely on humanitarians in an emergency; they can take a while to respond.”

These are the words of Rachele Nsii, a displaced woman in the Democratic Republic of Congo, who is now the president of a farming group, created by a project committee. Rachele steers the negotiating for the land that internally displaced people cultivate. She is helping create an emergency food stock for the new wave of displaced people. The 84 farmers she coordinates have also chosen to sell part of the harvest so they can buy livestock for future income generation.

During the 2014 conflict in Gaza, Ahlam saw her greenhouse destroyed by Israeli tanks. She had no livelihood, no husband and eight children. Through a livelihoods rehabilitation programme of CARE and our local partner, the Union of Agricultural Workers Committees, five harvests later, she is doing well, growing vegetables for the local market. And she's teaching other women in her greenhouse. She’s become a local leader and inspiration.

Olfat Al Aqili works with CARE as refugee centre coordinator in Azraq camp, Jordan. She says: “As a working woman, I have seen how slowly not only the children, but grown men also started to accept my presence in the camp. Five years from now, I picture myself where I am now still working directly with people affected by this crisis.

“But my hope is there will more work on women’s empowerment in the camp, with a centre and a strategy and that I can help build this.”

It is of course actually quite unremarkable that there are strong, brave and resilient women like Rachele, Ahlam and Olfat helping their communities cope with the impact of crises around the world. We all know many and diverse women like this in our own lives. What is remarkable is that the humanitarian system has been so blind to this until now. Here’s hoping that after 24 May, that starts to change.

More in this category: « Beyond 2015 for Women, Peace and Security Three reasons for attending our fringe event at the Conservative Party conference »