Home // Development Blog // Beyond 2015 for Women, Peace and Security

Beyond 2015 for Women, Peace and Security 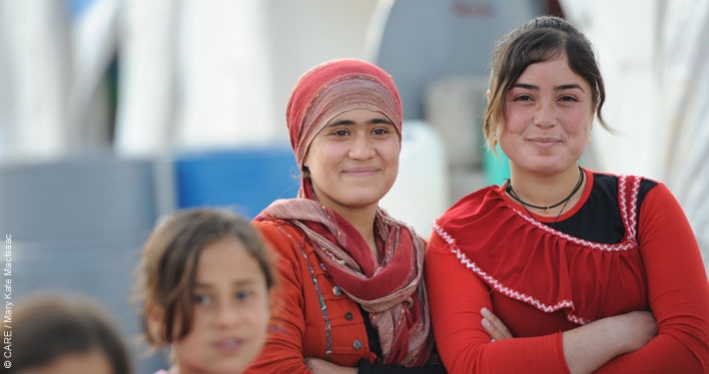 This year, world leaders are set to renegotiate global commitments on poverty, climate change and development financing. At the same time, the United Nations has commissioned major reviews of UN efforts on humanitarian coordination, peacebuilding and peacekeeping operations. It is therefore timely, but unfortunate and symptomatic, that the 15th anniversary review of UN commitments to protect and empower women in times of conflict is also happening in 2015, but in a silo from those wider reforms.

Fifteen years ago, around the time that UNSCR 1325 on Women, Peace and Security was being negotiated, I was working in Macedonia on a project to support the first regional network of local civil society organisations addressing the environmental impacts of the wars in the Balkans. The project was shambolic and powerful at once.

It was one of the first attempts to bring people together across communities torn apart by war to find common cause and work on impacts of the violence at grassroots level. Each participant had been touched in personal ways by the conflict. The process was heated. Meetings were often marked by tears and recriminations, but at the end of it a network of activists was born.

Looking back, I’m embarrassed to admit that I frankly cannot recall if and how women participated. Some were present, but most of the group were male. I remember the ways in which gender also contributed to the tone of the deliberations for good and for bad. The machismo of some (male) participants contributed to the fractiousness at times. The ways in which differences were resolved were also underpinned by attitudes, values and practices shaped in part by gender, amongst other things. The efforts of the NGO that I worked for at the time were largely gender-blind, but gender impacted on what we did and did not achieve.

Women and girls must be part of the process

This year marks the 15th anniversary of UNSCR 1325 on Women, Peace and Security – a process that I was unaware of at the time. This October progress on that Resolution will be reviewed and ways forward negotiated at the UN. As is the way with such processes, some governments will seek to dilute or unravel existing commitments – to escape the cost of investing in women and girls, or because they fear attention to women’s rights abuses by their own officials or security forces.

Yet even in those same countries, there are often also principled and brave government officials, and a mass of civil society activists, who understand that if they are going to have a hope of ending violence and finding peace and prosperity, then women and girls need to be part of the process.

This week, over 200 women’s rights and peace activists converge on The Hague in the Netherlands for the largest-yet consultation event in advance of the formal UN review in October. CARE International has launched a new report Beyond 2015 for Women, Peace and Security and is supporting our local civil society partners, SAATHI, an organisation fighting gender-based violence from Nepal, and ISIS Wicce, a Ugandan research institute supporting women’s participation in peace processes across East and Central Africa, to join the conversation.

Based on extensive consultation with our civil society partners and our staff working in conflict-affected countries around the world, CARE has identified three priority recommendations to the UNSCR 1325 review:

Lip-service and one-off events for the cameras cannot compensate for sustained investment in women to participate in decision-making at all levels. To champion this, the UN should create a new senior position – at least at Assistant UN Secretary General level – housed at the UN Women agency.

What’s more, increased funding should be channelled to support grassroots civil society activism. UN experts have proposed a new ‘global acceleration instrument’ to fund these efforts. This could help, but experience with other UN pooled funds shows that we need to maintain diverse channels of funding to be flexible, responsive and navigate the political complexities of different situations.

Secondly, efforts to design and implement ‘National Action Plans’ on UNSCR 1325 have been important, especially where governments have worked with civil society on ‘localisation’ strategies to translate the political commitments into action on the ground.

CARE believes that the best way to do this and to break the siloes between the NAPs and wider government policies and programmes is through making use of innovative ‘social accountability’ methods like Community Score Cards as practised in Rwanda, Egypt and elsewhere. The Community Score Card process is a tool first developed by CARE staff in Malawi in the early 2000s. It essentially involves facilitating dialogue between communities and local government officials through which both sides rate and identify the good and bad aspects of services being provided, such as health or education, for example.

Experience in Rwanda and elsewhere points to the transformative potential of linking NAP accountability efforts to the wider ‘social accountability’ dialogue on government services. The next generation of National Action Plans on 1325 need to systematically use this approach to empower communities on peace, security and post-conflict recovery.

Third and last, the 15th anniversary of UNSCR 1325 comes at a critical moment in reforms to the global humanitarian system.

Preparations are underway towards a UN World Humanitarian Summit in 2016, which is set to be the biggest-ever review of emergency relief to people caught up in natural disasters and conflict. The 1325 review should identify recommendations to better protect, assist and empower women and girls in times of crisis.

Local women’s civic groups are often amongst the first to respond to disasters. Their role needs to be acknowledged and supported. Systems to hold humanitarian agencies accountable, such as through insisting on the use of sex-disaggregated data in needs assessments and tracking gender in emergency projects through Gender Marking of funding, should be strengthened and systematically rolled out.

Moving beyond the silo

Since that project in Macedonia, I have worked with activists in countries affected by conflict from Afghanistan to Nepal to Syria. In each of these, I’ve had the privilege to work with inspiring women braving their lives to deliver life-saving aid and campaigning for an end to the violence.

UNSCR 1325 has undoubtedly helped create the political space for women to participate in the peace and security decisions that impact on their lives and their communities. But all too often, implementation of the Resolution has consisted of ad-hoc and tokenistic events convened in a silo from where the real decisions are made. Take the recent G7 Foreign Ministers meeting in Germany for example. After all the energy that William Hague and Angelina Jolie’s initiative brought to ending conflict-related sexual violence in 2013, it seems that the UK, Germany and other G7 nations let the issue drop to a very vague rhetorical statement from their meeting this year.

Two years ago, while researching women’s participation in the popular uprisings in the Middle East, a woman in a remote village in a remote rural village in Ibb, Yemen, told us: “To join the protests on Friday mornings and pray Al Juma’a praying with other women, I had to have shortcut routes by walking through rugged mountains every Thursday night. After what I had done, no force in earth dares to neglect me.”

Beyond 2015, governments, UN agencies and organisations like my own need to listen to that call. Please read CARE International’s new report Beyond 2015 for Women, Peace and Security to find out more about how.

More in this category: « Corporate Social Responsibility: What is the future of CSR? ‘Gender is not Summit-worthy’? – Five ideas for empowering women at the World Humanitarian Summit and beyond »