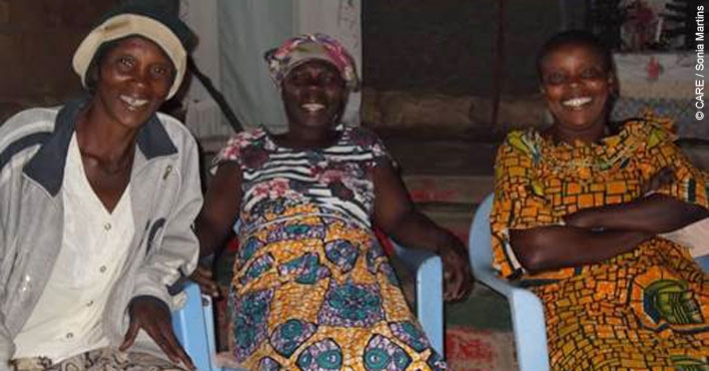 Participants in a gender gap analysis as part of the VSLA initiative in Maniema Province, DRC

Village savings and loan associations (VSLAs) have been a powerful tool for enabling millions of women to access loans, set up small businesses and improve their quality of life. But as an evaluation of a CARE VSLA programme in the Democratic Republic of Congo (DRC) has shown, VSLAs can also be a platform for addressing the social norms that sustain gender inequality, and can therefore also contribute to the wider and more complex processes of women’s empowerment.

VSLAs provide a unique platform for trust and solidarity among women which are the foundation on which to build empowerment. Evidence shows how VSLAs have contributed to significant increases in household income and improvements in food security, health status or children’s access to education.

Lack of access to and control over resources are major obstacles to women’s political participation, and it is widely argued that women’s economic empowerment can play a key role in increasing women’s participation in the political sphere. Having their own incomes, women become more independent, increase their self-esteem, grow their social capital and become more confident in moving into public spaces. However, other barriers such as restrictive social norms present a further challenge to women’s participation.

CARE’s work on VSLAs has shown that addressing social norms that sustain gender inequality and constrain women’s agency within their family and the public domain is essential to women’s participation in local governance – especially in a context like the DRC where women have traditionally not had a voice.

What do we know about the benefits of VSLAs for women’s empowerment and participation?

The VSLA programme in the DRC partly builds on analysis of CARE’s VSLA work in Rwanda which illustrated how gender dynamics influence the outcome of VSLAs for women. The findings showed that women’s ability to fully participate in and benefit from the VSLA methodology is ultimately constrained by gender norms and inequitable power relations. As the CARE report stated: “There are culturally sanctioned differences between the income-generating activities that are perceived as suitable for men and women […] Men are considered to have ultimate decision-making authority within the household regarding the taking on and use of loans, as well as regarding the control of assets purchased through those loans.” Even though men are not members of those VSLA groups, they are in many cases controlling the functioning of the VSLA group.

As a result of this work, CARE piloted in Rwanda a successful model looking at transforming gender attitudes and behaviours among couples who are members of a VSLA. Through a series of awareness-raising and discussion sessions on gender including topics such as masculinity, sexuality, and violence against women, CARE was able to collect evidence of how VSLAs with a gender transformative approach can help to change inequitable power relations within the household. This led to tangible results, including a better distribution of workload between men and women within the household, a fairer shift in how decisions are taken over household expenditure, and a noticeable reduction in levels of domestic violence.

VSLAs in the DRC: Helping to overcome restrictions on women in the private and public sphere

The lessons from Rwanda’s approach informed CARE’s approach in Maniema province in the DRC, enabling CARE to explore how VSLAs with a gender-transformative approach could improve the quality of women’s participation in community decision-making processes and local governance. DRC represents one of the most challenging contexts in which to promote gender equality and good governance. The DRC has alarming rates of gender-based violence and gender disparities in all aspects of human development.

The Tuungane programme in the DRC – funded by the UK government – seeks to empower communities to have a greater voice and control over their own development. The programme initially created spaces and set up mechanisms to ensure that women’s voices could be heard and that they could influence community decision-making processes (for example, a women’s focus group approach to give women space to speak in meetings or parity in the composition of local committees). However, those efforts were severely hindered by staggering gender inequality at the household level, where women are in many cases not even allowed to voice their opinion in front of their husbands.

The VSLA model with gender training incorporated was introduced in the province of Maniema in 2012-13 as a way to lift households out of extreme poverty and to empower women in their homes and wider community. This involved specific sessions for men and women to discuss gender and related issues and to explore gender-related barriers and opportunities. Alongside outstanding results in economic terms, with the majority of VSLA participants increasing their weekly family revenue by an average of 203% after one year, VSLAs in Maniema significantly improved relationships among couples and families. Changes included positive shifts in husbands’ perception of their wife, a reduction in levels of domestic violence, and positive changes in the roles traditionally held by men and women.

Beyond changes in the private sphere, the evaluation showed evidence of an increase in engagement in community activities by women members of VSLAs. The women stated they were much more confident about speaking out in public meetings; they felt much more respected by others; and they were regularly approached by community members for help and advice. At the same time, men became much more supportive of women’s participation in community activities.

As women find their confidence and voice in their families and locally in their villages, their formal roles in communities seem to have increased. The evaluation shows that the number of women VSLA members who took a formal community position after joining the VSLA programme almost doubled, while women’s formal participation in Tuungane activities increased.

As pointed out by the World Bank in its report Voice and agency: Empowering women and girls for shared prosperity, “Girls with little or no education are far more likely to be married as children, suffer domestic violence, live in poverty, and lack a say over household spending or their own health care than better-educated peers.” This clearly demonstrates the importance of addressing women’s empowerment through a multi-sectoral approach that engages men and boys and challenges detrimental social norms.

A further pilot on engaging men and boys in Maniema has unfortunately been interrupted due to a cut in funding for the province of Maniema. It is hoped, though, that the VSLA gendered model can be further refined and replicated in other provinces of the DRC.

More in this category: « CARE, GSK and ODI event, 18 September: Strengthening maternal and child health in Asia Women’s economic empowerment in rural value chains: The role of the private sector »