Fighting violence against women: how women’s organisations in Ecuador are pushing government to take action 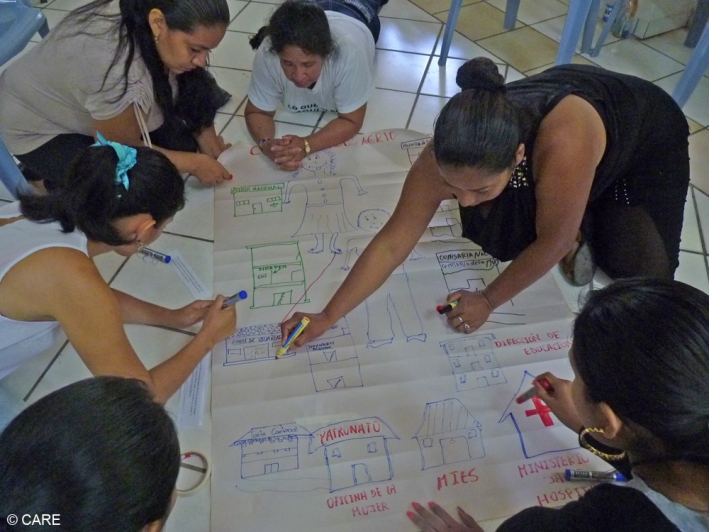 Women at a gender-based violence workshop in Sucumbios © CARE

“Violence against women is accepted and some people even forget that it is a crime. It’s so common that it’s no longer considered as a serious matter.” These words from a woman activist in northern Ecuador, on the border with Colombia, are a stark reminder of what women are up against. So what can be done to protect women from the ever-present threat of gender-based violence?

Lago Agrio is the capital city of Sucumbíos, an oil rich province of Ecuador on the border with Colombia that I visited in 2010 and again in March 2014. The city has grown at the pace of the oil industry, bringing in massive numbers of male workers and with it a booming sex industry. The sexual objectification of women is noticeable and almost everywhere, from sexist billboards to large numbers of bars and brothels. Inevitably, this creates a conducive context for violence against women.

Staggering levels of violence against women

According to the Women’s Federation of Sucumbíos, 8 out of 10 women suffer some kind of violence including sexual, physical and psychological violence. This rate is three times the national average, and women who are indigenous, afro-descendants or refugees are disproportionately affected. (20% of the population of Sucumbíos are refugees from Colombia.)

Current Ecuadorian government policy requires a percentage of every municipal budget to be invested in vulnerable groups, and specifically in women. And it requires every municipality to set up a gender commission with a mandate to deliver on gender-based violence. But none of the municipalities in Sucumbíos or Imbabura where CARE works have managed to fulfil those policy requirements. Commitments go unmet. Prevention and response mechanisms are weak, uncoordinated and under-resourced.

So what can be done to change this?

In Sucumbíos, CARE Ecuador’s approach focused on (1) setting up mechanisms for local government authorities, service providers, judiciary and civil society actors to meet and agree on strategies to address gender-based violence; (2) working with public authorities and other power holders so they are effective and accountable to women and organisations working to tackle gender-based violence; (3) strengthening women’s organisations and their capacity to hold government accountable and to do effective advocacy.

1. Set up mechanisms for dialogue

Tackling gender-based violence requires collaboration among different actors including health, security, judicial and social services among others. Sucumbíos has suffered years of uncoordinated approaches to tackling violence against women. Consequently, in early 2013 CARE helped set up and facilitate a ‘provincial network on violence against women’ to bring together different actors and institutions for coordinated action. It’s already showing positive results.

For the first time, key stakeholders in the province have agreed a referral and counter-referral system with clarity of responsibility for each provider at each step of the process. This helps to ensure that cases are no longer ‘stuck’ – for example, because the expert medical examination which serves as documentary evidence in the trial of the case hasn’t been done properly. The system has also led to an increase in cases being reported and followed through by the authorities.

It’s one example of how the network is spurring local governments and relevant bodies to take actions in a way they never did before. As one government official said: “With the network we feel we are being watched so we have to act.”

2. Build the capacity of decentralised governments and technical units to design relevant policies

CARE Ecuador has also trained government specialised commissions (like the girls’ commission) alongside civil society actors to design policies that will improve prevention but also respond to gender-based violence. For instance, the canton of Lago Agrio drew up policies to tackle human trafficking, Cascales focused on gender violence, Shushufindi on abuse of children and adolescents, and Cuyabeno looked at pregnancy among teenagers.

Working with decentralised authorities in this way also helps bring women’s organisations and civil servants together in a context of learning and exchange – for example, through workshops on gender and power attended by both women activists and women civil servants.

Training of government officials is a start – the next step is to hold government accountable and make sure they take action. CARE Ecuador is currently training women’s organisations to become active ‘social vigilantes’. This is about building the capacity of women’s organisations to monitor government services on prevention of and responses to violence against women, collect and analyse data, and produce evidence that can be used to put pressure on the government to deliver on its promises to combat and eliminate violence against women.

CARE Ecuador is also supporting the setting up of an observatory to monitor public policies on tackling gender-based violence. This will be hosted on the Sucumbíos province website where information will be uploaded and made accessible. ‘Social vigilantes’ in partnership with the observatory will collect specific data on policies which are suspected not to be effectively implemented or enforced.

Sucumbíos still has some way to go to fully institutionalise these mechanisms and reduce levels of violence against women. Meanwhile, women’s organisations in Ecuador face further challenges. Some observers feel that civil society in Ecuador in general has been weakened and co-opted in recent years, with increased restrictions on popular spaces where people can spontaneously and independently raise their voice. And with the country currently reviewing its penal code, women’s organisations in particular face the challenge of keeping up with a changing policy framework while advocating effectively at the local and national level.

This is where an INGO like CARE can bring real added value. If government on its own won’t do it, and civil society on its own isn’t able to do it, then the role of an INGO like CARE must be to bring them together and push them forwards. As CARE Ecuador has shown, this means facilitating relationships between government and civil society, and training civil society actors and local authorities to improve delivery and boost accountability. The successful model can then be documented so it can be replicated in other provinces, and scaled up on a national level.

More in this category: « Reflecting on peacebuilding and Theories of Change in Pakistan Decision-making for an uncertain future: can climate information help? »