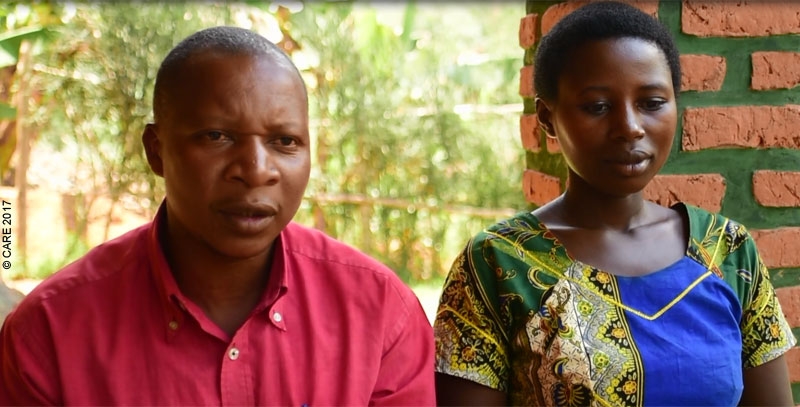 Jean Felix Havumiragira and Kristina Uwamahoro, who participated in the couples curriculum in Rwanda

Research shows that addressing intimate partner violence (IPV) requires working at society, community, household and individual levels to promote relationships built on respect, equality and peace. This blog shares the emerging learnings of working specifically with couples to address IPV in the context of Rwanda and speaks to the findings of the qualitative research conducted by Dr Erin Stern from London School of Hygiene and Tropical Medicine (read more in this article by Dr Erin Stern and Ritha Nyiratunga).

The Indashykirwa programme, which is funded by UK aid and implemented by CARE, the Rwanda Women’s Network and Rwanda Men’s Resource Centre (RWAMREC) in collaboration with the London School of Hygiene and Tropical Medicine, has been an innovative partnership bringing together practitioners and researchers to better understand what works to address IPV. Indashyikirwa consists of a package of interventions designed to work at individual, family and community levels to shift attitudes, practices and social norms that perpetuate gender inequality and GBV. So what have we learned so far about working with couples to address intimate partner violence?

What couples valued in the curriculum

The qualitative research undertaken with couples before, after the curriculum and one year later showed that the majority of couples immensely valued the Indashyikirwa couples curriculum. The retention and participation rate has been consistently high with strong commitment from both partners in a couple to attend three-hour sessions on a weekly basis for five months.

Couples appreciated being able to go through the curriculum with their respective partners. For some of the couples, the programme offered a rare opportunity to freely express themselves and share what they intimately felt about certain issues. The different notions of power (power over, with, to and within) and specifically the link between ‘power over’ and different forms of violence was an important step in couples understanding IPV.  Some couples were unaware that they were living in violent relationships. As one woman said:

“I thought that the way my husband talked to me was the way all husbands talked. When I started attending the couples’ training through the Indashyikirwa project, I realised I was experiencing gender-based violence.”

Awareness-raising was supported by skills-building sessions where couples learned and practised certain areas to support non-violent relationships, such as how to provide constructive communication and criticism or resolve conflicts within their relationship.

Where the curriculum challenged privileges of men as sole decision-makers and breadwinners, resistance especially from men was noticeable during the sessions. As one field officer noted:

“Men were asking negatively, ‘What is this? They want women to be above us.’ But after every single session, you see men start to be open and realise how they were using power over, they thought it was their right as men to give directions to their families, go out and drink, do whatever they want, and come home late.”

Consideration of men’s sexual entitlement in relationships/marriage was also initially resisted by many participants. The idea that women could initiate sex was for many taboo and uncomfortable. Those discussions were however essential to challenging entrenched ideas and norms about couples’ dynamics that ultimately were underpinning unequal power relations. Couples were encouraged to adopt different behaviours at home using some of the newly acquired skills.

After some time, changes were noticeable with couples embracing new roles within the household. Couples reported through the qualitative interviews, including a year after the curriculum, changes around household and property decisions, chores at home, sex or quality time spent together. The solidarity and closeness created among couples within each session and with the RWAMREC facilitators was also an important factor to encourage and support this process of change. The reflective and participatory approach of the curriculum and the take-home activities encouraged couples to try new ways of interacting and engaging with each other.

An unexpected change has been the number of couples trained who had been living together and decided to legally marry. Legal marriage in Rwanda provides greater status to women and gives women legal rights that they are not otherwise guaranteed to access, such as to property. This finding is very important in better understanding risk and protective factors for IPV.

1. This research, conducted as part of the What Works to Prevent Violence against Women and Girls programme, indicates that it is possible to conduct research with couples on IPV in an ethical manner. It also demonstrates the added value of interviewing couples over time to get their insights into what works well for transforming relationships and reducing IPV. Research under this intervention has provided invaluable findings that have contributed to better understanding and refining the intervention in a way that wouldn’t have been possible with only an impact evaluation.

3. Deconstructing the concept of power was essential in couples’ understanding of violence, especially the link between negative use of power (power over) and different forms of IPV (economic, emotional, physical, sexual). The concept of positive power (power within, to and with) was also inspiring for couples to address IPV in their communities, and to strengthen especially women’s self-confidence.

4. Legal marriage was identified as a factor influencing women’s access to rights and as a potential protective factor for IPV. Informal marriage could increase the risk of IPV while limiting institutional responses to violence experienced by women. This reinforces the importance of taking an intersectional lens when working with women to reduce IPV. Further evidence on this critical issue is available in this paper Intersectionalities of formality of marital status and women's risk and protective factors for intimate partner violence in Rwanda.

Read more: A critical aspect of the Indashyikirwa programme is safe spaces for women, which were established to help women feel comfortable discussing IPV and gender inequality, help educate women about their rights, and refer or accompany women for health, social or criminal justice services. Read Eugenia’s story on the What Works website to find out more about the impact of the women’s safe spaces.

More in this category: « 10 key principles for private sector impact towards the Sustainable Development Goals Will the UN Global Compact on Refugees leave women and girls behind? »