Reflecting on peacebuilding and Theories of Change in Pakistan 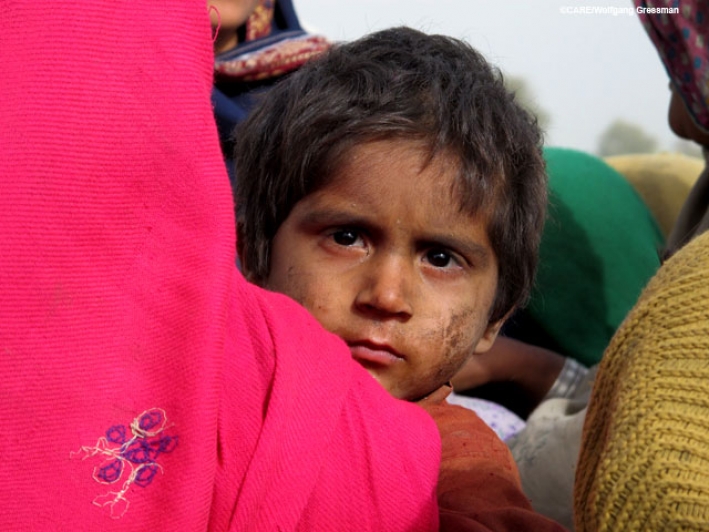 CARE International UK is a champion of using theories of change (ToCs) in peacebuilding design, monitoring and evaluation as part of a strategic approach to peacebuilding that includes using conflict analysis, linking to the work of others and working towards a clear vision of peace. Over the past two years a team of CIUK trainers has been supporting the British High Commission to build the ToC skills of local NGOs working in Pakistan and India. The aim of this training is to support partners to articulate and evaluate their new ideas for how to help lower tensions in the region. An added bonus is that the trainers end up learning as much as they teach.

What is a Theory of Change?

As has been spelled out before, CARE uses theories of change to describe any change process taking place from the lowest level of activity to the change achieving the highest level goal. This is articulated using an amended version of the OECD DAC formulation:

At its simplest, and as we demonstrate in our training using an egg, a glass of water and a piece of card to do a version of the classic table cloth trick, you could state: If I pull the card from under the egg quickly then the egg will fall into the glass (and not roll onto the table), because inertia will hold and gravity will force the egg straight downwards. (Credit is due to Mark Rogers and Heidi Ober for coming up with and developing the egg idea, which works an absolute treat in the training. Physicists however are free to argue with my explanation in the comment section below).

Although we start with an egg, the training goes on to show how this approach can be applied to every change within a project, forcing us each time to be very clear about what we are aiming to achieve and how we think this change will happen.

Three Theories of Change in Pakistan

In Pakistan, the British High Commission sees itself as a ‘venture capitalist’ backing fresh and innovative initiatives in the region, accepting that some may not succeed but with the hope that they will uncover new approaches worth scaling up and replicating. Consequently, the partners’ theories that the training uncovered and looked at were varied and intriguing.

Another sought to bridge the worrying gap between young people in different kinds of schools suggesting that if students from public, private and madrassa educational establishments could meet to engage in art or cultural activities together, then they would start to interact and later gain more positive views of each other, because their mutual interests would help them to overcome prejudices that currently divide them.

A third project suggested that if district government officials and trained civil society groups could meet in regular forums to discuss progress in implementing electoral manifesto commitments, then democracy would be slowly strengthened at the local level, because it would demonstrate government acceptance of oversight.

Each of these projects had theories above and below these, moving beyond the theory in question to show the significance of the targeted change to the peace writ large. But each of the theories selected were interesting and yet under-researched enough to merit greater investigation. Should the organisations go ahead and find out how valid their theories are in their contexts, then they will not only benefit their own organisational credibility going forward, but also contribute a great deal to peacebuilding practice in Pakistan.

Three benefits to using a Theory of Change approach

So why the ToC approach, and how does it enhance the effectiveness of a project?

1. Strengthening the clarity of the project, and making it more logical

In Islamabad the training participants added their voices to the consensus from other trainings that using theories of change can greatly improve the project logic by making us articulate our assumptions about how change will happen. Through peer review of each other’s assumptions, results can become more realistic, because big hopeful leaps between activities and expected changes are easier to spot (For instance, the notion that one meeting with a government official will by itself result in a change in the law).

Equally, activities that do not contribute directly to the intended changes because they are not relevant to the context can be more easily identified, so helping to challenge the ‘copy and paste’ approach that can easily take hold when NGOs get comfortable running the same projects over and over.

2. Easier to measure results and better for learning

Focusing on the logic and clarifying the changes that are intended makes measuring results much more straightforward for organisations, because knowing the change they want to measure is half the battle in finding the right questions and indicators to assess it. However, beyond filling out a log-frame, using ToCs enhances any organisation’s ability to learn from their project.

CARE recommends selecting one key hypothesis, significant to the overall goal and yet sufficiently uncertain to warrant attention, to focus on for research. Questions about this hypothesis can then be included in an M&E plan so that not only will an evaluation say What the project achieved, but can also analyse How a major targeted change happened. This helps the donor think about replicability and scale up, but contributes to wider learning in the peacebuilding sector as well.

Lastly, ToCs can help us break the paradox of matching ambition with reality in peacebuilding. Both NGOs and donors have to ‘sell’ their project to others (funders locally, or government officials and parliament), and need to show how their project will contribute to larger, more impressive changes; the so-called ‘peace writ large’. At the same time, the pressure is on from donors for one- or two-year projects to show results which, in the short time period, tend to be much more local and specific to the project.

Rather than over-promising, and then only reporting on a few outputs, ToCs can help NGOs to bridge this gap by articulating a reasonable explanation for how the measurable results of the project can contribute to larger change. Testing, and providing evidence for a project’s key theory somewhere higher up this chain builds confidence and credibility in the larger model, even if the actual evidence showing all the changes up the chain to the peace writ large will not exist.

For more on ToCs have a look at CDA and SFCG’s companion pieces on the DME for Peace website.

More in this category: « What the UK BIS Department can do to promote corporate responsibility Fighting violence against women: how women’s organisations in Ecuador are pushing government to take action »