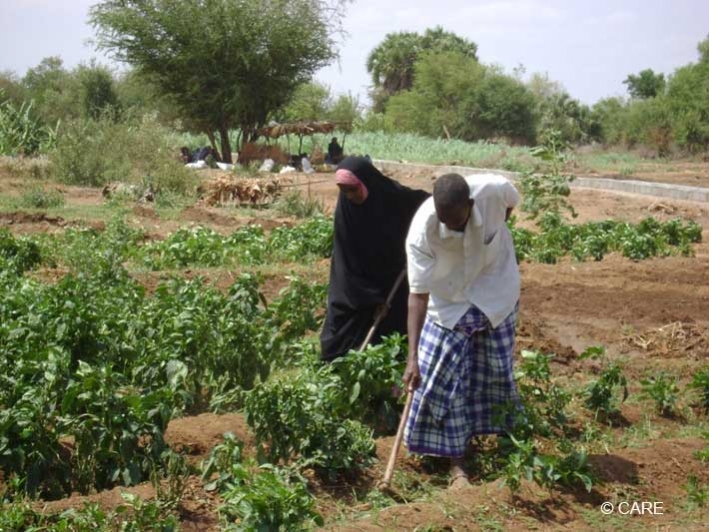 An update from a CARE workshop on smallholder agriculture, climate change and food and nutrition security.

This is a chance to make the elevator pitch, to a new audience, on a new CARE initiative around the old gems of food and nutrition security, climate change, and that outcast sector that is finally coming back into favour, agriculture. Feedback welcome as to whether I can hold your attention on this for the next two minutes. Here goes:

Smallholder farmers – that is 200 million farms across the world of up to two hectares – will not in 10 or 20 years’ time contribute in the way they do currently as a group of producers. As a society concerned about ending poverty and seeing the 21st century become a more equal one, the well-being of these one billion people matters. But what will be the future of smallholder farmers and agricultural labourers in the next decades?

Here’s what a few of us posited: the changes we are currently seeing will be exacerbated with youth increasingly disinterested in agriculture; difficulty in harvesting enough either for the family or to sell in local markets; and even more tenuous tenure or ownership over the land. The consequences in the next decade or so will be accentuated – for example, the wider movement of people to the city as poor crop patterns, lack of secure land tenure and impedingly difficult crop growth mean populations cannot manage adequately on the land and will be increasingly vulnerable to shocks.

The impact will be felt directly in the north also, where the lack of predictable supply will result in ever-increasing food prices. Yes, it’s easy to speak in generalities but, despite detractors, the changing climate will have increasing impacts on the world in a way that our current structures are insufficiently cognisant of – and unable to deal with, whether internationally or even at organisational level.

So, this week our food security, climate change and agriculture teams came together as a new theme team under the name of Acres; to seek an approach for CARE’s current and future work with the one billion smallholder farmers, labourers and their families.

Our approach will be concretised in due course, but we have agreed our litmus test for it.

Our aim is to see smallholder agriculture that can:

and scaling up is critical across the principles so that other actors, particularly governments take on the approach too, to ensure that it extends out to all smallholders. And finally, if it is about farming for the future, it must engage and be targeted at not just women, but particularly the youth too.

Development never tires of acronyms, so we couldn’t quite leave a workshop without a new one. So this sustainable, equitable, resilient, productive approach is obviously SuPER, which will produce SuPER food, for a SuPER world. Or, before we forget the need to focus on youth, a SYRuP-E one.

More in this category: « Over 110 states agree to tackle sexual violence in conflict – perhaps international solidarity isn’t dead after all? Women must have a voice in the post-2015 MDGs »