Learning Lessons in Conflict Sensitivity from the Private Sector 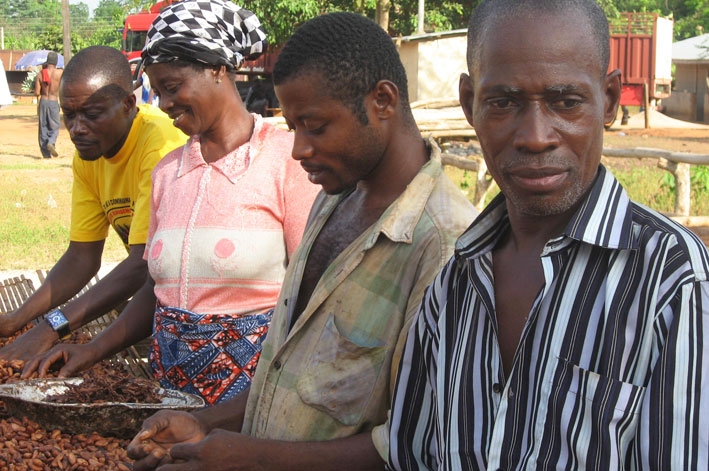 Cocoa workers in Ghana whom CARE works with as part of its partnership with Mondelez. © CARE

Surprisingly robust and informative – my verdict on the International Finance Corporation (IFC) 2012 standards on environmental social sustainability from a conflict sensitivity perspective. Perhaps we should spend a bit more time learning from the sector many NGOs love to hate.

Private sector led development is a hot topic in the aid industry, from the roles of remittances to private sector funding of innovative approaches to livelihoods or resilience initiatives, and work to improve supply chains and market access (for some of the latest in this area please check out blogs from our private sector team). Consequently, when looking at the IFC performance standards, it should not have been as surprising as it was to find that they demonstrate real thought leadership to support conflict sensitive investments.

For those new to this (and I was until a month ago), the IFC is the investment wing of the World Bank, providing direct investment, advisory services and acting as an asset management company for third party investors with the purpose of fighting poverty. While this sounds like Gordon Gecko masquerading as a charity volunteer, the task required that I go beyond first impressions and look a bit deeper at their standards and guidelines. These set out how investments should be made without causing harm to individuals and communities and what responsibilities ‘clients’ have for managing environmental and social risks.

The quality and scope of the IFC’s performance standards was surprising. While light on terms more familiar to the development community, such as conflict sensitivity, violence, social cohesion or conflict analysis, the standards require detailed assessments and structures for monitoring work that (if implemented) would rival the best systems put in place by NGOs attempting to ensure accountability and conflict sensitivity.

Equally impressive, but buried in the lengthy accompanying guidance notes, was a stakeholder engagement plan (page 41 – Annex B –its worth digging out), which was the first one I had seen from anyone, whether private sector or in the NGO world.

Of course the standards are not perfect. From a conflict sensitivity perspective plenty of holes were found, including around the initial conflict analysis, the focus on directly affected populations rather than those who might be impacted away from the project area, and the security guidelines.

Equally, the biggest caveat, as always, is that operationalising the standards is far harder than articulating them. Where the focus is on advising investors in fragile and conflict affected contexts the devil is in the detail and implementing these standards takes time and money that many private sector firms might not consider worth expending.

I was also struck by how similar the challenges faced by private sector groups and NGOs were. Both should be concerned with the reaction of the communities with which they work, but we are often too slow to respond to complaints and feedback. Both recognise the need to involve senior management in raising awareness of conflict sensitivity and prioritising it, but too often the work is delegated to more junior and less influential staff. The list goes on.

One lesson for me has been to tune down my not-for-profit bias and recognise that interesting, innovative and principled work is being generated from many corners, some more unlikely than others.

I’ve heard it said that, in the medium term, political will for generous overseas aid budgets will likely disappear and that private sector organisations will play an increasingly important role as key donors and investors (if anyone has done some thinking on what this may look like and the challenges this could bring, please add the references below). This close examination of the IFC standards has left me feeling slightly more optimistic about this scenario than I would previously have imagined.

More in this category: « Recovering after disasters: Why ‘building back safer’ is better than ‘building back better’ UK Action Plan on business and human rights needs some legal teeth »