Mixing with the one percent at Davos: How to ‘improve the state of the world’ through financial inclusion 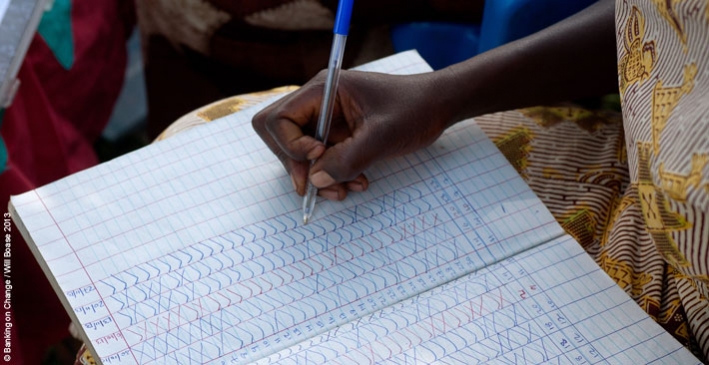 Beatrice Alowo, 43, Secretary of the Yesu Amala VSLA group in Busia District, Eastern Uganda, takes a roll-call of members before commencing a meeting

CARE is at Davos again this year, talking to the business and government elite who gather each year in the Alpine hide-away for the World Economic Forum. On Friday (21 January) we are co-hosting a discussion event with Accenture Development Partners on the role of banks within financial inclusion, pointing to the key message for banks in our recent Within Reach report which highlights the strength of the business case for banks to engage in financial inclusion, but also highlighting from CARE’s perspective the key role that financial inclusion plays in the empowerment of women, and the imperative for banks to step up to the challenge.

Two years ago, CARE also attended Davos to push forward the cause of financial inclusion. At the time, our Head of Advocacy, Alice Allan, reflected on “Why mix with the Davos fat cats when you fight for the poorest?”, musing “I can’t help but have lingering doubts about Davos’ legitimacy… Surely Davos is just another example of … a group of mostly unelected actors setting the global agenda.” Her thoughts were partly driven by an Oxfam report on inequality showing that the world’s 85 richest people (about a coach load) were as wealthy as the poorest half of the world. Oxfam have returned to the theme this year with their new inequality report and the headline that you now need only load the coach with the world’s 65 richest people in order to bring together more wealth than is held by the bottom half of the world’s population.

So why have we returned to Davos on the same topic? Two years ago, we used an event at Davos, working with Plan UK and Barclays as part of the Banking on Change relationship, to launch the Linking for Change Savings Charter which sets out international principles for effectively and responsibly linking informal groups of savers to formal banking products and services. The Charter has now been signed by 29 organisations including Barclays, Visa, Fidelity Bank in Ghana, Airtel Money Africa and Accenture, and is in the process of producing the State of Linkage report, which will highlight how many banks around the world are linking savings groups, some detail on how they are doing so, and insights into the key trends. We should also note that Accenture have been spurred on by their commitment to the Charter to work with CARE on our Within Reach research which will be key to Friday’s discussion.

So doing stuff at Davos can have impact: it is an opportunity to catch a large group of very senior executives and government officials who are turning up to hear new ideas and make new contacts, and who are buying in, at least some extent, to WEF’s mission of “improving the state of the world” and “engaging the world’s top leaders in collaborative activities focused on shaping the global, regional and industry agendas”. Whilst we recognise the criticisms of Davos (see for instance Aditya Chakrabortty in the Guardian), we do see it as a key opportunity to push the banks further on how they will engage in financial inclusion – a massive opportunity for them: our Within Reach report highlights that serving the 2 billion people currently without bank accounts is a key element of a $380 billion per annum revenue opportunity for banks – but also a key part of banks stepping up to their responsibilities against a continuing background of concerns on irresponsible lending and a possibly impending financial crash.

We will report back on the workshop here on Insights in the near future.