Refugee crisis: Has stopping migration become the sole purpose of the EU overnight? 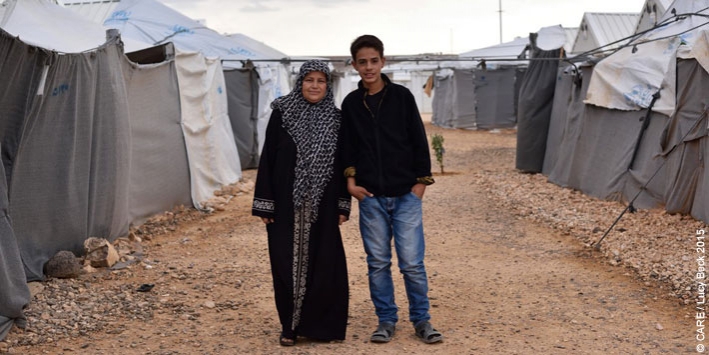 45-year-old Basema, pictured with her son Hussam, lives in Azraq refugee camp in Jordan with two of her sons. Her other two sons and her husband are in Germany and Turkey.

According to a policy proposal released by the European Commission and European External Action Service on 7 June, the mind-blowing answer to that question is: yes. Stop migration to Europe with all possible means. Whether it is EU development cooperation or trade with third countries, or cooperation on climate change, education, energy, agriculture, you name it. All of these policies are to serve the purpose of migration control... IF member states and the European Parliament agree to this proposal.

What would it mean in practice?

It means that the EU turns back the clock 10 years, to before crucial agreements were reached in Paris and Busan. At those summits the Union committed to a number of key principles for development such as alignment with the interests of its partner countries. Instead the EU would retreat from that partnership spirit to an approach where third countries find themselves obligated to agree to the EU’s conditions of migration control, or else face cuts in funding and cooperation. Conditions even include re-admission of everyone who crossed their territory when they made their way to Europe.

It is a well-known fact that the majority of refugees stay in the region, close to their country of origin. Only a tiny minority manage to make their way further afield, for example to Europe. Basically the EU is saying that it cannot handle the 1.3 million people that arrived in Europe, the wealthiest continent on the planet containing 28 member states across a large territory, but at the same time it would use all possible means to force third countries to do exactly this and much more; whether it is Lebanon where Syrian refugees already comprise over 20% of the population, or countries like Kenya or Tanzania, which have been hosting tens of thousands of refugees for decades.

In this narrow migration control mind-set, the EU has already started negotiating with states across Africa. But can we really expect regimes like Eritrea to respect refugee and migrant rights, if the UN has just this week recommended that Eritrea is referred to the International Criminal Court for persistent, widespread and systematic human rights abuses during the past 25 years? Clearly not. People deported to Eritrea will likely face imprisonment, torture and labour camps, while repeat ‘deserters’ could even be executed. Is this what the EU stands for these days?

What is more, the premises of the Communication [Communication from the Commission to the European Parliament, the European Council, the Council and the Investment Bank, on establishing a new Partnership Framework with third countries under the European Agenda on Migration] are fundamentally flawed. It ignores the fact that those fleeing conflict are knowingly risking their lives to flee immediate danger, thus even the most hostile and repressive policies will not deter their movement. Moreover, the notion that increased funding and development will necessarily lead to a reduction of migration is a myth (the poorest do not migrate). Also the idea that more border control can stop migration is a faulty assumption. It just makes it more dangerous for people to migrate, using smuggler networks, via constantly changing routes.

An approach that is already backfiring

The policy proposal is based on the much applauded EU-Turkey deal, where the EU has outsourced protection to another country with funding. But that approach is already backfiring. For example, Kenya is threatening to close Dadaab refugee camp, where it has hosted tens of thousands of Somalis for decades, unless they get the same kind of financial support as Turkey (6 billion euro). Where do we expect these people to move to if the camp closes? Back to a war zone in Somalia?

Other countries will follow Kenya’s example and the EU will not be able to buy its way out of responsibility sharing all over the world. Because of the EU-Turkey deal, the EU has lost its ability to push other countries to accept and protect refugees without conditions attached, in line with international law. It clearly has a negative impact on the EU’s standing and power in the world.

The consequences for the world’s most vulnerable people

Working for a development agency, I also fear deeply about the consequences of this new policy, if approved, on the most vulnerable people on the planet we are trying to help. After all, the EU is the largest development donor in the world. Will all countries that do not produce migrants or refugees get their funding cut in the next budget negotiations? Yemen for example, a country where over 20 million people are currently in need of aid, but that is not on anyone’s radar because it does not produce an outflux that ‘threatens’ wealthy countries? What about people in those regions which are very poor but are not considered strategically interesting for this purpose? Already the Communication states that all Multi-Annual Indicative programmes in priority countries will need to help deliver on these migration compacts. [A Multi-Annual Indicative programme is a large-scale multi-annual plan for EU development cooperation with a certain country, developed after years of consultation with the authorities and civil society.]

But surely, this policy would not have been proposed if it wouldn’t fit the EU’s binding legal basis, the Lisbon Treaty? Wrong again. The Lisbon Treaty clearly states that “Union development cooperation policy shall have as its primary objective the reduction and, in the long term, the eradication of poverty. The Union shall take account of the objectives of development cooperation in the policies that it implements which are likely to affect developing countries.” So quite on the contrary, it obliges Europe to ensure that none of its policies have a negative impact on developing countries, the so-called ‘Policy Coherence for Development’.

Pandering to a minority viewpoint

And all of this is proposed to please a vocal section of civil society that feels threatened by ‘outsiders’. Looking at numerous recent surveys though, such as a recent one from Amnesty International, they represent a minority. The majority of European citizens are not at all against refugees in their country. 84% of Germans for example would welcome refugees in their neighbourhood or even household, and 70% of the British feel that their government should do more to help refugees.

As European citizens, as human beings, we cannot be anything else than outraged about this proposal that European Commissioner Timmermans and High Representative Mogherini put forward. It is appalling, short-sighted, against humanity, against the wishes of the majority of the European population and against the EU’s own strategic interests in the longer term.

I joined CARE in 2014. Based in the EU office, I seek to increase the gender dimension in EU development cooperation and humanitarian aid, and work on issues as diverse as migration, humanitarian-development nexus, budgets and climate change.

Before joining CARE, I worked as Advocacy and Communication Officer for VOICE, the European network of humanitarian NGOs. In 2009, I completed my PhD at the Conflict Research Group in Ghent, focusing on livelihoods, integration and transnationalism in protracted refugee situations, for which I spent a lot of time on the fascinating Thai-Burmese border.

More in this category: « Let's make 2016 the Year of Engaging Men and Boys to stop gender-based violence Putting the ‘power’ into ‘empowerment’: Why decision-makers in business need to think not just about gender equality but about changing the dynamic of power »