The three Rs: Reading, Writing and Respect – changing male attitudes to women and sexual violence through the school curriculum 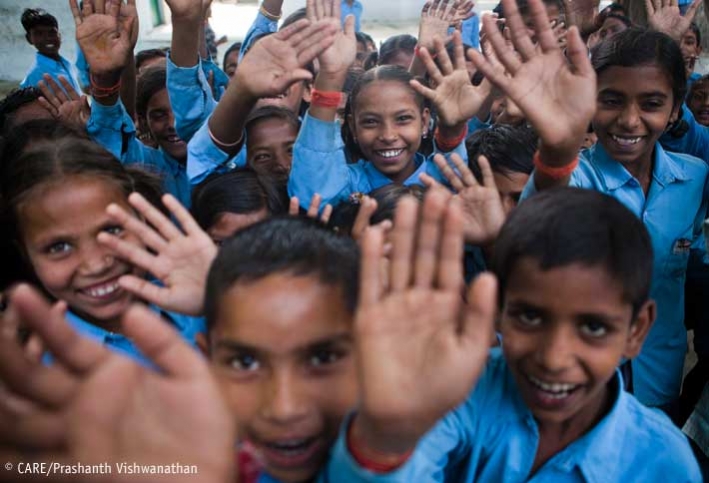 After the global summit on sexual violence ended, CARE International UK’s conflict policy team set ourselves the task of making sure the interesting ideas we heard did not stop there. Over the next few months we will be scoping out plans for a regional campaign in the Great Lakes of Africa on changing male attitudes to women and sexual violence through the school curricula in each country as part of our focus on protecting and empowering women in conflict. Suggestions of reading or contacts and any tips very welcome.

One of the best things to come out of the ESVC summit for me was the opportunity to learn from colleagues in CARE and other organisations such as Promundo and RWAMREC on what promising new approaches they were working on to tackle some of the root causes of sexual and gender-based violence (SGBV). At the time I wrote about how schools were an important space to work in, and listed out some of the reasons why getting gender equality, non-violence and better sex education into curricula was so beneficial for both boys and girls. 5,000 of you agreed, signing a petition that went to William Hague in September, urging him to ensure Education ministries formed part of the group of institutions involved in tackling SGBV in each country.

The idea had come from CARE’s work in the Balkans where evidence gathered by CARE corresponded with other international data research to show that attitudes could be changed, and in turn this could impact on reduced levels of violence. However, to avoid the ‘copy and paste’ approach, now that we are looking at replicating this work in the Great Lakes of Africa we need to do our research. This is to observe what already exists from partners such as RWAMREC, what arguments and evidence might be persuasive and where the opportunities are to push the principle and approach of engaging men and boys through education.

So where to start? Over the next few months I will be looking at gathering evidence from CARE’s programming aimed at Engaging Men and Boys in preventing SGBV to ask what works, both institutionally and in community settings. I will also look to the work of other agencies and researchers to see what interventions with young people have proven successful in changing destructive attitudes and behaviours.

Beyond literature reviews, I will be working with colleagues in the region to establish what the institutional environment is like in Uganda, Rwanda, DRC and Burundi in practice. Does the education system already include sexual and personal health discussions on the curricula? Does it include a component on gender and respect in relationships? Is it voluntary or compulsory? Which organisations, networks or activists are already engaged on this issue, including noting what activities UN agencies are taking in support of the HeforShe campaign which pushes similar themes? What institutions would need to be engaged in order to succeed in getting this issue discussed by national political leaders?

Many brains are better than one. Let me know if you’ve read something important on this topic, or have ideas on how we can move this forward. If you know of activists or organisations already working on this theme in the Great Lakes please let me know. Equally if you think there are some obvious key questions I’m missing, post them under the line and I’ll make sure I add them to the list. Thanks.

More in this category: « Claiming your rights takes money in the bank: Why women's economic empowerment is a crucial step to women's rights World Humanitarian Summit: Indecision is not an option »