Home // Development Blog // What does the future hold for the Global Goals for Sustainable Development?

What does the future hold for the Global Goals for Sustainable Development? 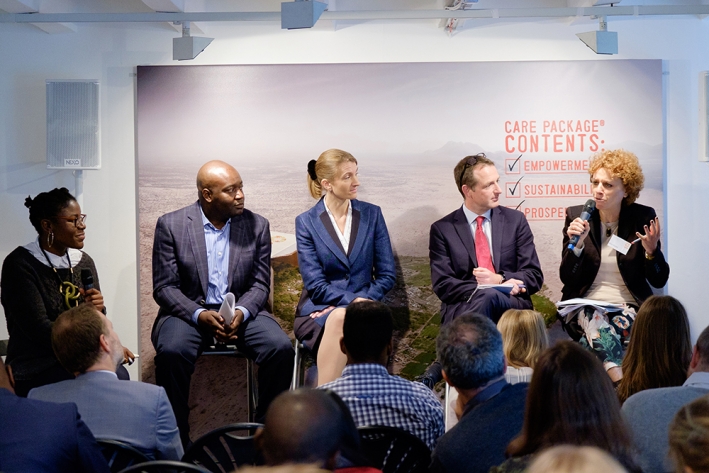 Last month in New York, 17 Sustainable Development Goals were launched, now known as the ‘Global Goals’ with a comprehensive roadmap for the next 15 years leading up to 2030. While the fanfare and the party might be over, the question remains: what next?

What needs to happen to ensure that these new Global Goals are achieved? What are the challenges ahead? This was the topic for a panel discussion hosted by CARE International UK during its 70 year anniversary week, and facilitated by Eliza Anyangwe, Freelance Writer and Commissioning Editor for the Guardian. The panel represented various actors that will play a role in the implementation of the Global Goals.

The debate in review

I'm with @careintuk at event asking 'global goals, what next?' #GlobalGoals#care70pic.twitter.com/Hucglmg9Wf

Nelson Muffuh argued that there needs to be a shift towards a sustainability mindset. The Global Goals are universal, and therefore universally applicable. In other words, if the Global Goals are to be achieved all stakeholders need to be involved. This means that the UK government will need to report on its contributions towards the global goals both within and outside the UK borders. But only when citizens know their rights can governments be held to account for the delivery of the Global Goals. Nelson reminded participants: ‘the cost of not doing anything at all will be far greater than the costs of doing’.

We all need to play our part to "Transform our world by 2030". Why must we care? What must we do? @nmuffuh#SDGshttps://t.co/tpkMMHv8JD

#care70#globalgoals universal no longer business as usual in international development, this involves all of us @nmuffuh

From 'aid' to 'investment' #globalgoals, via @SerenaB2013pic.twitter.com/vU8AyoZ08b

David Hallam stated that the difference between the goals before and the goals now is the integrated approach and just how comprehensive they are. Governments in different countries will need to change their behaviour to deliver the Global Goals. The British government will need to work across different government sectors to ensure that the Global Goals are delivered and adequately funded. The UK government also has a role in making sure that companies pay tax in countries where they make a profit. The challenge is what to prioritise with limited resources available and the risk that some countries may prioritise goals over others as a result.

A: @DFID_David - On a personal level I will reduce food waste in my house to zero #GlobalGoals#care70

Gaia Gozzo argued that the global goals need to be owned by the people. This is a political process. Politicians don’t always make evidence based decisions. Civil society has a role in collecting, compiling and using data to hold actors to account. CARE has a lot of experience in social accountability approaches such as the community score card. These tools can be adapted for citizen-data. The UN has called for a data revolution. The focus is, however, on building the capacity on national data monitoring. There seems to be an assumption that official data produced by the government is reliable and that unofficial data produced by citizens is unreliable. We need to build the credibility of citizen generated data, make sure that they are comparable and consistent. It is not only about producing data but civil society will need to use data to challenge and hold actors accountable. The data revolution will be a tool to empower people all over the world to question what progress their governments have made towards these commitments.

#care70 A big thanks to speakers on #GlobalGoals what next?panel today @DFID_David@SerenaB2013@gaiagozzo@nmuffuh and @ElizaTalks chairing

Personally, what I took from the discussion is that the Global Goals are interlinked and will require all actors involvement for them to be achieved. For example economic growth cannot be seen in isolation, but requires changes in consumption and production and the overall distribution of resources. The private sector cannot be profitable without addressing other issues. In the same way the current refugee crisis can no longer the responsibility of countries such as Greece, Turkey or Italy, but will require a joint effort. In the same way that we can all do something to respond to the current refugee crisis, we can do our part in making sure the Global Goals are met. And this is the exciting part, for the Global Goals has potential to become a useful universal tool to hold businesses, governments and civil society organisations to account; a tool to empower people all over the world to question what progress their governments have made towards these commitments.

More in this category: « Do we need to put the Politics back into Conflict Analysis? Lessons from 15 years of post-disaster shelter in India »