Home // Development Blog // A G8 declaration and a UN resolution to tackle sexual violence - what do they really mean for women who live in conflict?

A G8 declaration and a UN resolution to tackle sexual violence - what do they really mean for women who live in conflict? 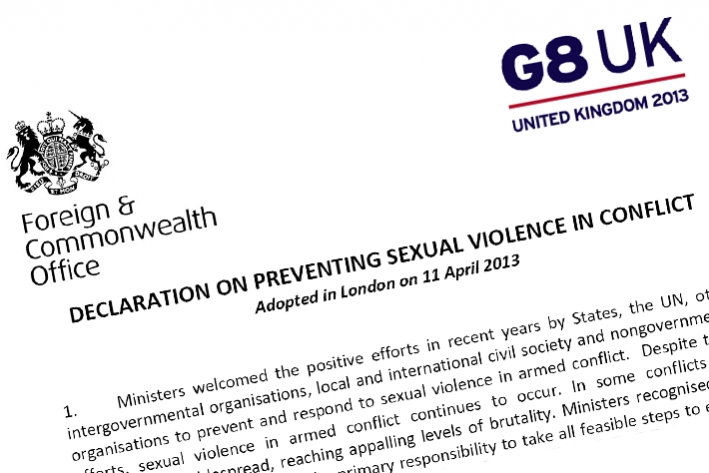 In the last few months the world’s leaders have declared and resolved to end sexual violence against women in conflict. First we had the G8 declaration and then UN resolution 2106 but what difference will these really make to the women who are being raped in places like the DRC, Syria and South Sudan?

Let’s start with a positive. At least world leaders are taking this issue seriously. For too long rape has been considered as an inevitable fact of war. It’s a step forward that this view is changing and that the issue is even being discussed. Let’s face it, talking about rape and fistulas is going to be uncomfortable for many and that’s why people like William Hague, who has been leading a campaign to prevent this sort of violence, should be commended.

The negative, I fear, is that the politicians seem to be focused on punishing the people that commit the crimes without really looking at why they are committing these crimes. Let me be clear, I’m not saying that we shouldn’t punish people – obviously this has to be part of how we end this crime. For too long people have gone unpunished and if people are held accountable and face jail this will act as a deterrent but this won’t, on its own, solve the problem.

At the moment the initiative appears to be treating the symptom and not the cause. There are many factors that allow this crime to prevail such as chronic poverty, war, lawlessness and a total absence of legal systems but the main problem is that women are still not seen as equal to men.

And, we need to address and change how men treat women in everyday life, not just in times of war. If it’s okay on a normal day to beat your wife, shoot a girl on her way to school or marry a girl at 14 how can we stop men, in times of violent conflict, raping women?

For this reason CARE works with men and boys. We work with local ‘champions’, who are effective catalysts for change. For example, men in Burundi known as ‘Abatangamuco’ (those who shed light) who have transformed their own attitudes to women, testify before the community about how they have changed their behaviour and the benefits this brings for both sexes. In the process, other men emulate their behaviour. Alongside this work we offer training to women or establish local savings groups that enable them to start small businesses and earn a living. As they become more confident, empowered and have control over their own money their husbands see the value they can bring to their families. With this change the balance within the family shifts onto a more equal footing.

We need more projects involving men and boys so we can work to change behaviour and bring an end to violence in everyday life. Until women are equal in times of peace we can’t expect women to be safe in times of conflict. We know this is a huge ask as women aren’t even equal here in the UK, for example only 23% of parliamentarians are women. But it has to be at the centre of all our efforts to tackle sexual violence.

This is why another, older UN resolution, passed over ten years ago, is still so important today. UN resolution, ‘1325’ on women peace and security –does two things. It says women must be better protected from rape, but crucially it says women should also have a much more equal footing when it comes to achieving peace – be that as mediators, negotiators or peacekeepers. At present a woefully small number of women participate in these roles.

More in this category: « Ending sexual violence: A safe toilet is only one, small piece of the jigsaw A Perfect Storm: How CARE campaigned for reproductive health results in Pakistan »