A review of Kuwait II, or the Second International Humanitarian Pledging Conference for Syria 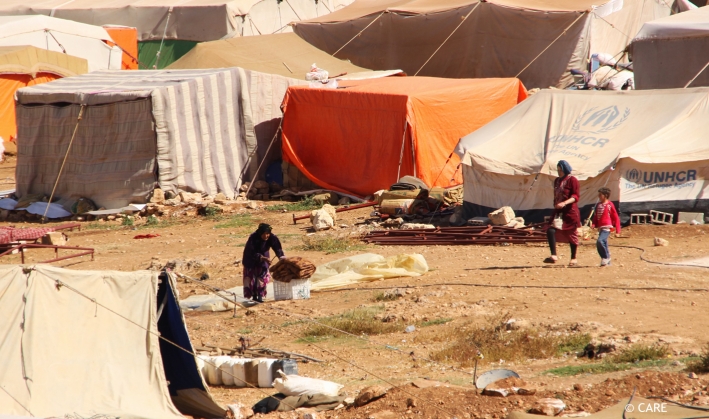 As Conflict Policy Advisor for CARE International UK, I'm currently in Amman, Jordan, responding to the crisis in Syria. Now, as Kuwait II or the Second International Humanitarian Pledging Conference for Syria comes to a close I'm taking the opportunity to review the conference, as well as the expectations and hopes of humanitarian agencies like CARE.

The importance of Kuwait II

Kuwait II is a conference bringing together all the major international aid donors to commit to funding for the Syrian crisis. In December, the UN launched the biggest appeal of its history, pledging for 6.5 billion USD to help more than ten million people in need – both inside Syria and in neighbouring countries.

As we approach the third anniversary of the conflict, the humanitarian needs are ever-growing. More than 2.3 million people have fled Syria since January 2012, seeking refuge in Lebanon, Jordan, Turkey, Iraq and Egypt. This has turned into the worst refugee crisis in the world and the most catastrophic war in decades.

Sadly, the complex and seemingly intractable nature of the conflict means that it has been hard for aid agencies like CARE to raise funds to support life-saving aid to those affected.

When a tsunami or earthquake hits the public and governments are generally more forthcoming. But of course, the suffering caused by conflict is not any less awful regardless of how it is caused. The Kuwait II conference comes at a critical moment in decisions on funding by the world's wealthy nations – both traditional donors like the Europeans, US, Canada and Australia, and other important states like Russia, Gulf donors and other nations in the region.

CARE and other aid organisations's expectations for Kuwait II and beyond

It's essential that the richer nations and international institutions like the UN make strong commitments to funding the Syrian crisis response at Kuwait II. In doing so, they need to look at what the needs are across the whole of Syria and the wider region, and allocate funding accordingly. The politics of the conflict should not get in the way of aid reaching those communities that need it most. Aid agencies like CARE also need longer-term and more flexible funding to enable our work in what is a very difficult, dangerous and fast-changing context.

The short-term timeframes of classic donor funding for emergency aid do not allow us to establish the kinds of relationships we need to , and inhibits our ability to change operations quickly in response to new developments in the conflict and humanitarian needs on the ground.

Also, there is a need to look at how to support the host communities in neighbouring countries where the refugees have fled to. The governments of Jordan and Lebanon are developing plans for the kinds of support they need. The donors, UN and humanitarian organisations like CARE need to work with them on this and support. It's essential that such funding supports the real needs of the most-affected communities at the local level, and supports the local authorities in taking responsibility for delivering services. Host and refugee communities have to be supported in joined-up fashion. Many of their needs are the same – they struggle to pay their rents, food and other ways to support their families.

The last pledge from Kuwait I has not fully been funded yet, so why does it make sense to seek for more money? And how useful is it to pledge for more if those pledges do not translate into aid being delivered on the ground?

It's true that some donor nations have been more generous than others, and some have met their pledges whilst others have not. This has sometimes to do with budgetary cycles of these governments and the time it takes for funding to come through the system.

But for others there is simply a need to step up and deliver what they have promised. Whatever the case, this is a very dynamic conflict with rapidly-changing needs. So there is a need for the donor institutions to come together on a regular basis and review if the levels of funding are adequate or if priorities have changed.

We are concerned at indications off-the-record from some officials that certain states have reached their projected ceiling for funding or that current levels of funding may not be sustained. The needs are growing, not declining. Conferences like Kuwait II should result in a review by the international community of who is paying their fair share and who is not.

The suffering caused by the Syrian conflict is horrific and there is a moral obligation for states to support the response. While humanitarian aid cannot offer a solution for solving this crisis politically, it is the least that can and must be done to alleviate the consequences for those unfortunate people caught up in the conflict.

More in this category: « What did the Nutrition for Growth compact deliver for smallholder women farmers? Empowerment beyond the buzzword: The unintended consequences of empowering women »