Home // Development Blog // Call to Action on gender-based violence in emergencies: 4 ideas for the Roadmap

Call to Action on gender-based violence in emergencies: 4 ideas for the Roadmap 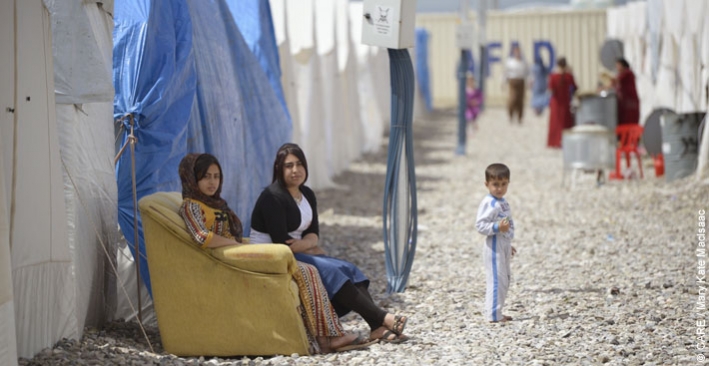 Women at Berseve 1, one of the largest camps for displaced people in northern Iraq, with almost 15,000 people living there

On Thursday 1 October, John Kerry, US Secretary of State, Tobias Ellwood, UK Parliamentary Under Secretary of State for the Foreign and Commonwealth Office, and a number of other senior politicians from wealthy donor nations and developing countries, as well as leaders of UN humanitarian agencies and NGOs like CARE, meet at the United Nations to launch a new global ‘Roadmap’ to combat gender-based violence in humanitarian crises through to 2020. Here are four ideas for how the Roadmap can make a difference.

1. Let the Roadmap hit the road

While it is great that the Call to Action on GBV in Emergencies agreed in 2013 has brought together governments, UN agencies and NGOs to share ideas on tackling GBV in natural disasters and conflict, the process now urgently needs to shift emphasis from changing policies to changing practices on the ground. Otherwise it risks being seen as a talking-shop that failed to bring about tangible outcomes for people at risk of GBV on the ground.

Don’t get me wrong – political leadership of the sort demonstrated by ministers attending the event in New York this week is hugely important. A few years ago it would have been unthinkable that foreign ministers would make violence against women and girls a priority like this.

But these leaders must now press for follow-up through relevant line ministries and the humanitarian programmes and partnerships they fund on the ground. The best way to do this would be to convene ‘Inter-Agency Real-Time Evaluations’ in major crises – at least one per year in each year of the Roadmap.

2. Broaden the circle of agencies integrating GBV into their work

The circle of humanitarian agencies, and staff within those, who care about GBV remains very small.  Until a wider range of large-scale humanitarian agencies and each sector of a crisis response – including shelter, food, water and sanitation etc – mainstream GBV into their work, then we are not going to achieve effective referral systems for survivors who need support and/or reduce the risks of exposing people to GBV (eg through poorly designed refugee camps that are unsafe).

The best way to do this is to use the collective influence of the Call to Action participants to promote implementation of the newly-launched Inter-Agency Standing Committee GBV guidelines across all sectors of the response and at all levels. Everyone – from the individuals who sit on UN-NGO ‘humanitarian country teams’ to individual NGOs and their staff – should be trained on relevant aspects of the guidelines and held accountable to them.

The process towards the World Humanitarian Summit in 2016 has brought increased attention to debates on ‘localising’ the humanitarian system to empower national and local institutions in the response to natural disasters and conflict. The Call to Action needs to make this a priority going forward.

A small number of crisis-affected states have spoken at previous Call to Action events and endorsed its communiqué. Local women-led organisations and women’s rights organisations are often amongst the first responders to GBV and the wider needs of women and girls in times of crisis, but they are too often off the radar of the mainstream response. Roadmap implementation should put women’s agency, leadership and participation at the heart of what we are working towards.

How? Well, the past year has seen governments adopt the new Sendai global framework on disaster risk reduction and next year they will make further commitments to ‘localise’ aid at the WHS. All these new commitments will inform the next generation of strategies by southern governments on national disaster management and emergency preparedness; and support from donors and INGOs to those efforts. Every Southern government which endorses the Call to Action communiqué or Roadmap should be prioritised for attention to bringing GBV and gender equality into those efforts.

NGOs like CARE already partner national and local institutions, including governments and local women’s groups, on GBV and gender equality programmes. We need to bring the best of those experiences into the Roadmap to take the good practices to scale.

4. Use the Roadmap to mobilise support for gender equality and GBV towards the World Humanitarian Summit

The Roadmap launches at an important moment in negotiations towards the World Humanitarian Summit, which is slated as the biggest-ever moment for reform of the global emergency system. The Roadmap timeline through to 2020 also coincides with the period in which whatever gets agreed at the WHS gets implemented. So if governments and others involved in the Call to Action are really serious about it being a call to action, then they should be acting as ‘champions’ for gender and GBV towards the summit.

Probably the hottest topics towards the summit are debates on ‘localisation’ of the humanitarian system and the lack of respect for international humanitarian law, which is resulting in civilians increasingly being subject to horrific and targeted violence in conflicts like those in Syria and Afghanistan. So let’s see the Call to Action rally its supporters to strong WHS outcomes on ‘localisation’ including specific steps to empower local women and girls to cope and recover from crises with dignity.

If nothing else, to be really transformative, the Summit should transform the ways in which the roles of local women’s organisations are recognised and supported going forward. Over 20 southern civil society partners worked with CARE on recommendations on how the Summit can empower local women’s groups for World Humanitarian Day this year. Call to Action supporters should also lead the coalition of Summit stakeholders signing up to initiatives to strengthen the protection of civilians from armed conflict.

CARE and the Call to Action

CARE has actively participated in the ‘Call to Action on GBV in Emergencies’ from the outset in 2013 and we will be there at the event this week. It’s brilliant to see governments, UN agencies and civil society commit at senior levels to strengthen their efforts on this issue. But after Thursday, the Call to Action needs to translate into action on the ground. We hope to hear these four ideas in the mix for how that can be achieved.

More in this category: « How citizen monitoring could make the SDGs really deliver for poor people Red herring or ripe for attention? – Putting men and boys on the agenda at the Global Summit to End Sexual Violence in Conflict »