Home // Development Blog // Red herring or ripe for attention? – Putting men and boys on the agenda at the Global Summit to End Sexual Violence in Conflict

Red herring or ripe for attention? – Putting men and boys on the agenda at the Global Summit to End Sexual Violence in Conflict 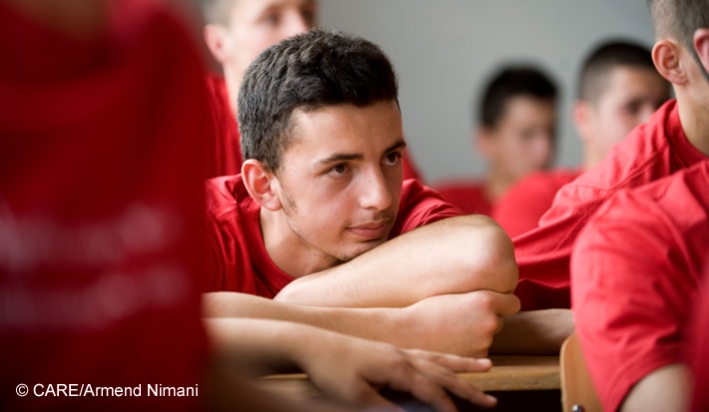 CARE International is calling for increased attention to engaging men and boys on gender-based violence at the Global Summit to End Sexual Violence in Conflict. This is not an uncontroversial stance. Some say it risks distracting from, or worse undermining, efforts to tackle violence against women and girls. Others fear that projects to engage men and boys inevitably get dominated by them.

At CARE, we see the risks. Indeed, projects on political issues like human rights or gender are always a risky venture. But we firmly believe the struggle for gender justice will be incomplete unless we seriously address masculinity and the roles given to men and boys in society. This blog explains why.

What are the concerns?

One fear is that investment in projects with men and boys may divert funding away from support to women’s rights organisations.

It is true that funding to civil society is being squeezed as donor governments increasingly channel funding to southern states, UN agencies and private sector contractors. Some say that the ever-more limited funding pot for civil society on gender shouldn’t get split between women’s and men’s groups. There is research which suggests that, in contrast to other strategies like promoting legal reform for example, it is strong women’s rights groups that change the game and push most effectively for tackling gender violence.

Ingrained patriarchal norms can also mean that projects to engage men and boys can, if poorly managed, inadvertently reinforce men’s control of decision-making.

In 2007, I saw this for myself on a visit in Sierra Leone to a local peace project supported by a partner organisation. A (male) project manager introduced me to (male) village leaders while a number of women, described as the ‘female project committee’, sat in a corner of the room. Throughout the meeting, the women kept quiet and were evidently inhibited from saying anything out of line with points raised by the men. Everything from the physical seating arrangements to the facilitation of the meeting pointed to the hollow nature of ‘women’s participation’ in that project.

Attention to male survivors of sexual violence might distract from efforts to address violence against women and girls.

Global statistics indicate that the majority of conflict-related sexual violence is committed by men against women. In the words of the former UN military commander in the DRC, Patrick Cammaert, “it is now more dangerous to be a woman than a soldier in modern conflict.” We know that humanitarian efforts continue to struggle to meet the needs of female survivors. Fix that gap first before addressing the (allegedly) relatively small number of male survivors, say some.

These arguments are compelling and the concerns need to be addressed. But not engaging men and boys is not the right response to them.

Firstly, without engaging men and boys or addressing masculinity, strategies to address gender violence will never be comprehensive.

It’s not an either/or situation – but too often, this discussion gets reduced to VAWG (violence against women and girls) versus GBV (gender-based violence). Some in the debates have adopted an adversarial tone which may serve their individual or institutional interests to attract attention or funding, but creates an unhelpful polarisation between those ‘pro’ attention to men and boys, and those against.

Both women’s and men’s organisations working for gender justice need to be advocating for integrating support for their work across wider development budgets. CARE’s approach to integrating masculinity and violence prevention in education in the Balkans – which then got scaled up in the national curriculum of Serbia, Croatia and Kosovo – is one great example of this.

It is also true that aid agencies can get better at joining up their work on engaging men and boys with support to women’s rights organisations. Ad-hoc approaches and siloes between projects to engage men and projects to empower women are generally not effective.

In the Balkans, CARE’s work with male youth on masculinity and violence emerged from several decades of support to women’s organisations and wider gender justice efforts at the community level. Building on that work and our good relations with women’s groups, we were able to address their concerns and loop them into the design and implementation of projects on both human trafficking and working with young men and boys on gender violence in schools and social spaces, like sports clubs.

Secondly, there is increasing evidence that the extent of sexual violence against men and boys has been grossly underestimated.

Take Colombia as an example. The latest UN report on sexual violence in war indicates that up to ten per cent of incidents reported by government sources in 2012 and 2013 related to violence against men and boys. Assessments by the Refugee Law Project of Congolese refugees in one camp in Uganda found that one in four men had experienced sexual violence.

What is more, male survivors that come forward for medical, psycho-social or other forms of assistance are often denied it. Health clinics and other projects on gender-based violence are simply not designed with them in mind. In conflict contexts, the medical components of the response to gender-based violence are generally integrated into sexual, maternal and reproductive health work. Typically staff training, equipment and methods used are designed entirely in terms of dealing with women and girls, not men and boys.

As a consequence, the question of whether men have experienced sexual violence is never asked, male survivors are inhibited from seeking support, and their physical health and well-being deteriorates with all the knock-on consequences that has for their family and community.

Men and boys as allies and champions of change

If we are serious about addressing gender-based violence, then we need to engage with men and boys not only as perpetrators, but also as allies and champions in transforming the underlying social norms and behaviours that drive it. Watch this short film describing the amazing, brave and transformative work on gender that men in some of the poorest communities in Burundi have undertaken to find out more. That’s why CARE is calling for comprehensive commitments to promote gender justice at the summit and beyond. Anything less will not be adequate.

More in this category: « Call to Action on gender-based violence in emergencies: 4 ideas for the Roadmap How engaging men and boys is a crucial part of empowering women in Afghanistan »